The process of calculating risk metrics in line with requirements for insurance companies may start with the development of macroeconomic scenarios that are consistent with the building blocks in the calculation of those risk metrics. In particular, consider macroeconomic scenarios that embed the arbitrage-free assumption. This covers the estimation of a macroeconomic Dynamic Stochastic General Equilibrium (DSGE) model built upon the economic theory of agents’ decisions and responses to shocks. This article also describes how the model can be used to generate a range of internally consistent scenarios for stress testing purposes. For insurers, stress testing is essential for business planning and assessing capital coverage over a five-year period, as well as being a key component of the ORSA for Solvency II.

The scenarios around these variables can then be used as an input in the standard Economic Scenario Generator (ESG) engines that most insurance companies use.

The model is based on work by Christiano, Eichenbaum, and Evans (2005), who added various forms of frictions to a basic New Keynesian DSGE model in order to capture the dynamic response to a monetary policy shock, as measured by a structural vector auto-regression (VAR). The dynamics of the system are determined by a number of equations describing the relationships between real variables, the behavior of prices, and the exogenous processes.

Among these relationships, two in particular focus on the arbitrage question: pricing equations (Euler optimality equations) and market clearing conditions. Pricing equations in these models are derived from a set of conditions that ensure that there are no arbitrage opportunities when making investment decisions.

An example is the asset pricing equation for capital that precludes arbitrage (as a function of the real risk-free rate of the economy, expected inflation, and expected return on capital):

The qt in these models is just a proxy for a wide notion of capital in the economy and usually refers broadly to a range of investment assets, such as stock, bonds, or a firm’s capital.

Standard economic scenario generation engines are based on simulations from the models that depict different paths for the variables, with random draws from the forecasting errors distribution. In a Bayesian world, however, there is another type of simulation that can be drawn from another set of distributions. Part of the estimation process consists of calculating a different class of uncertainty (parameter uncertainty), which is expressed in terms of posterior distributions for the parameters of the model. These distributions are computed by recording the iterative search over sets of parameters that take place when calculating the likelihood function. This analysis only reproduces the posterior distributions of a few relevant parameters: monetary policy reaction to GDP deviation from potential, discount rate, total factor productivity shock, and risk premium.

Models – in other words, the systems of equations that describe the behavior of a given economy – depend on parameters. That is, they are linked to the uncertainty around the true values of those parameters. There is a measure for that uncertainty because there is a (posterior) distribution for each parameter. Therefore, a baseline projection with a DSGE model can be obtained using different points of the distribution of parameters (e.g., mode, mean, and median). Depending on the point used, different forecasts are obtained.

It is worth mentioning that the model’s equations reflect the General Equilibrium structure where the decisions of agents and their reactions to shocks are all tied up together to make those actions consistent with economic theory and with data (up to parameter estimation). Such consistency translates into the dynamic paths of each variable being consistent with each other. Thus, the path for GDP growth using the mode of the distributions of parameters will be consistent with growth in real wages, inflation, or interest rates. 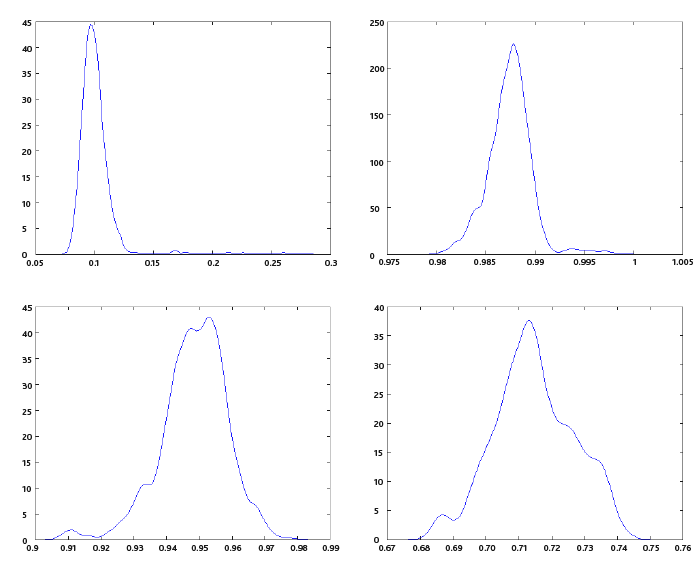 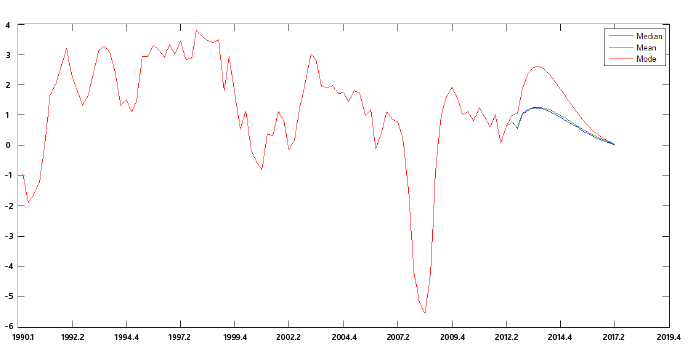 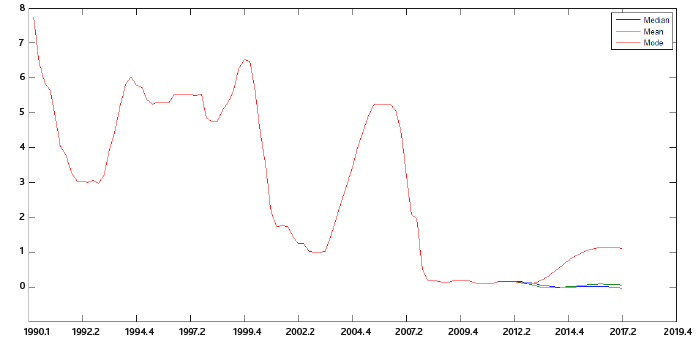 The next logical step would be to use the entire distributions of parameters to construct a more complete spectrum of simulations. The construction of the distributions of the model’s parameters was coded in MATLAB and the algorithm produced a sample of 10,000 draws of sets of 26 parameters. Yet, consider the most complete exercise, which would also include the uncertainty coming from the forecasting errors. Such an exercise would involve incorporating simulations from the distribution of forecasting errors into each of the simulated paths for the observable variables (obtained from simulations on the parameters’ distributions). To keep things simple, however, only the first 2,000 simulations from parameter uncertainty are shown here.1

Figure 6 illustrates the GDP shock distributions on the different forecast periods. In this particular set of draws, and since the last point in history near 1% GDP growth rate, a majority of simulations fall within the positive range. Most of the histograms at the different forecast periods present a higher concentration of positive GDP growth rates. However, a considerable number of simulations in each period also exhibit negative growth rates.

As can be seen in Figure 7, the interest rates consistent with those simulations of a stronger GDP growth would reach up to 2.5% in less than three years. On the other hand, negative GDP growth rates go with zero, or very close to zero, interest rates. Interestingly, even though some of the simulated recessions would be of similar magnitude to the 2008 crisis, this model only features moderate deflation rates for some periods.

This article has examined a macroeconomic forecasting model that is capable of generating arbitrage-free scenarios. Even though these types of scenarios are relevant for all practitioners, insurance companies are specifically required to apply scenarios that are consistent with the arbitrage-free assumption. 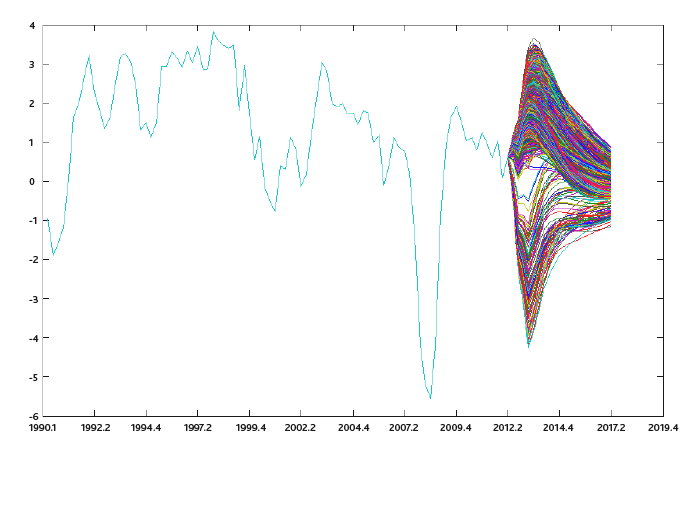 Many insurers normally just take the path for a couple of macroeconomic variables to use as an input into their ESG. Their ESGs are typically calibrated so that, for instance, interest rates curves (and other risk metrics of interest) are generated with the arbitrage-free assumption embedded in them. However, in the previous step, those paths for macroeconomic drivers may not necessarily respect the non-arbitrage assumption, which may make the whole process slightly flawed.

Scenarios are generated from simulations that add another layer of uncertainty by considering parameter uncertainty on top of forecasting errors. This scenario generation process is able to produce scenarios that go beyond the borders of what was observed in history while ensuring internally consistent paths across variables. 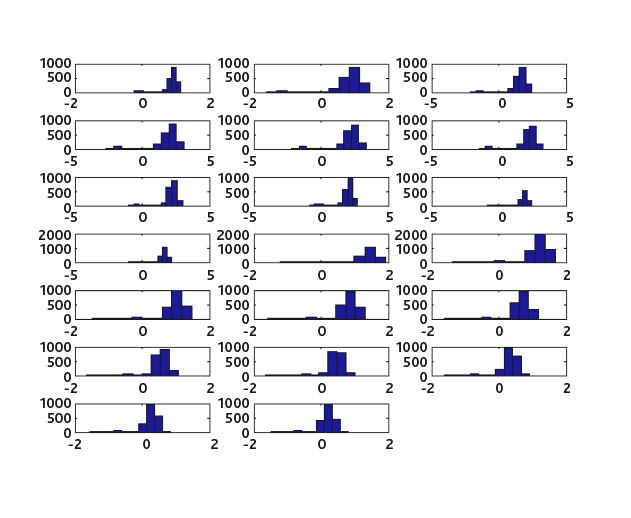 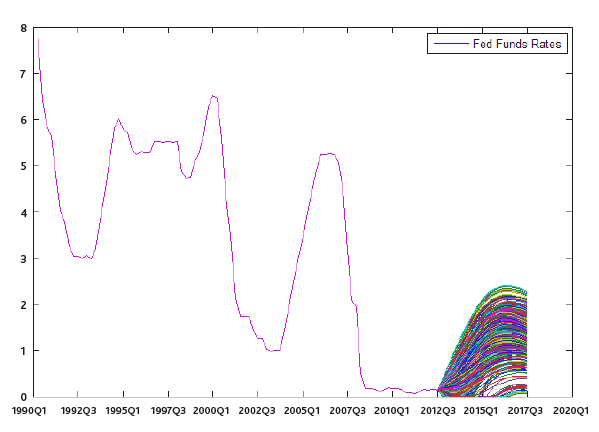 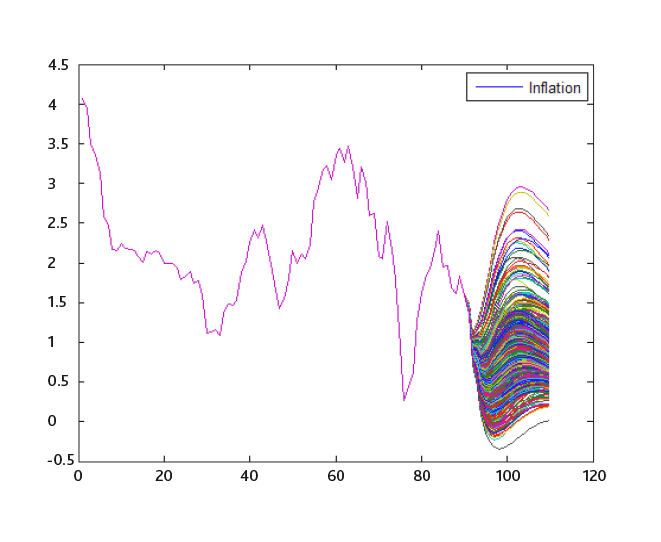 Richard is the Director of the Quantitative Research Group at Moody's Analytics, responsible for numerous analytical productivity and data quality initiatives. He designs, implements, and operates systems that apply lean manufacturing principles to data production. Prior to Moody’s Analytics, he was a consultant with McKinsey. He has a PhD and an MS in aerospace engineering from Georgia Tech, and an SB in aeronautics and astronautics from MIT. 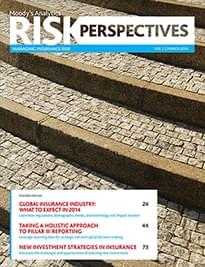