In this article, we discuss development of a framework that addresses the forward-looking and probability-weighted aspects of IFRS 9 impairment calculation using macroeconomic forecasts. In it, we address questions around the practical use of alternative scenarios and their probabilities. We also include a case study to illustrate these concepts in practice.

The incoming IFRS 9 regulation provides for the use of macroeconomic forecasts and probability-weighted outcomes, particularly when accounting for the impairment of financial assets. Indeed, the spirit of IFRS 9 suggests that finance officers should be more forward-looking in their recognition of credit losses on a firm's balance sheet, with the macroeconomy often taking a central place in any impairment forecast. Paragraph B5.5.42, for example, "requires the estimate of expected credit losses to reflect an unbiased and probability-weighted amount that is determined by evaluating a range of possible outcomes." More specifically, two key areas of IFRS 9 suggest that macroeconomic scenario forecasts may be utilized:

This report focuses primarily on Option 1 above, and how probability weights can be derived from macroeconomic forecasts to produce an unbiased estimate of lifetime expected losses. Given the accounting standard's goal of consistency, however, the scenario weights derived from Option 1 may also be used in Option 2.1

Like the IFRS 9 standard itself, this article does not prescribe a specific plan of action or a one-size-fits-all approach to the use of macroeconomic forecasts and probability weights. Rather, it is designed to help institutions build a framework that addresses the "forward-looking" and "probability-weighted" aspects of IFRS 9 impairment calculation using macroeconomic forecasts. Moreover, we provide a purely quantitative approach to the problem. The use of qualitative overlays, which are allowable within the framework of IFRS 9, is beyond the scope of this article.

This report outlines three areas of discussion for banks to consider:

The report concludes with an example from the wholesale lending space, which illustrates three different approaches to IFRS 9 compliance.

The IFRS 9 standard does not explicitly define the number of macroeconomic scenarios that should be used for impairment calculations. Item B5.5.42 is again instructive:

In practice, this may not need to be a complex analysis. In some cases, relatively simple modelling may be sufficient, without the need for a large number of detailed simulations of scenarios. For example, the average credit losses of a large group of financial instruments with shared risk characteristics may be a reasonable estimate of the probability-weighted amount. In other situations, the identification of scenarios that specify the amount and timing of the cash flows for particular outcomes and the estimated probability of those outcomes will probably be needed. In those situations, the expected credit losses shall reflect at least two outcomes in accordance with paragraph 5.5.18. (Emphasis added.)

In some limited cases, then, the use of one or even zero economic scenarios may be sufficient. The illustrative example below, from the wholesale sector, outlines three approaches to the problem. The first two methods utilize macro scenarios and probability weights, while the third approach uses an unconditional PD that does not require a specific macro scenario or probability weighting. Similarly, there is an upper limit to the number of scenarios that may be appropriate. Section BC5.265 suggests,2 "The calculation of an expected value need not be a rigorous mathematical exercise whereby an entity identifies every single possible outcome and its probability," so the requirement of a simulation-based approach over thousands of scenarios can be disregarded.

The language used by the standard is intentionally vague ("at least two"), and the interpretation of the number and type of economic scenarios will differ by firm and portfolio complexity. In this article, we outline three approaches, two of which use multiple economic scenarios covering both upside and downside possibilities. This seems appropriate for most firms and most portfolios as the standard is designed for firms to consider a representative sample of the complete distribution.3 The framework can be extended to incorporate more scenarios or greater complexity.

Moody's Analytics economics division produces monthly off-the-shelf macroeconomic forecasts under a baseline scenario and several alternative economic scenarios, known as S1 through S4. These forecasts cover 54 countries and over 90% of the world's GDP. Each scenario has a probability attached to it based on its historical distribution.

The baseline scenario is therefore the median outcome, and not the mean. The IFRS 9 guidelines require expected losses to be calculated on the probability-weighted mean of the distribution, not the median, so even if a single scenario were to be used, the baseline may not be appropriate. (Other economists may forecast the mode – the most likely outcome – which is also inappropriate, without overlays, within IFRS 9.) These scenario probabilities describe a cumulative distribution function (CDF) showing probabilities for the economy to perform better or worse than a given forecast (Figure 1). 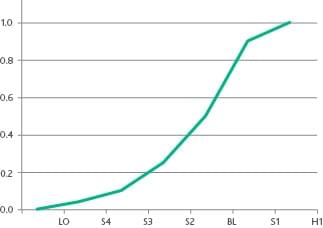 An expected value can be derived from a CDF in two ways. First, we could "integrate" the CDF to calculate the area under the curve. This would give a single mean economic outcome that could be conditioned on in expected loss calculations. However, as will be discussed later, it may be preferable to use several economic scenarios, push these scenarios across credit expected loss inputs (PDs, EADs, LGDs), and then weight these scenario-conditional risk parameters by the scenario probabilities. A second option is to "differentiate" the CDF, or take its slope at each point, to produce a probability distribution function (PDF). Figure 2 describes the PDF using US GDP (in billions of 2009 USD). 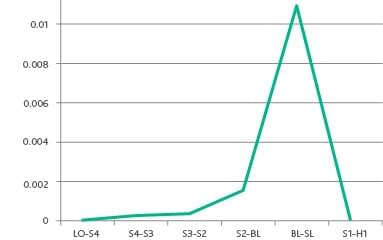 We can calculate an expected value by using the probability masses from this PDF to weight either the economic data or the credit outcomes conditioned on that economic data, depending on which stage of the process the weights are applied to.

Public discussion at the Transition Resource Group for Impairment of Financial Instruments emphasized that using a single macroeconomic scenario may not be appropriate if the relationship between credit losses and the macroeconomy is non-linear. This will often be the case in a properly specified credit model. Moreover, even if the credit estimate is unbiased, a single weighted scenario may be undesirable as the standard emphasizes evaluating a range of outcomes, not a range of scenarios. This is because firms may gain additional insight into the exposure of their portfolio by assessing a distribution of credit outcomes.

From an accounting perspective, both Firm A and Firm B may recognize similar expected losses under IFRS 9. Yet from a statistical perspective, the measure of expected credit losses recognized by Firm A may be biased because of the non-linear relationship between credit losses and the macroeconomy. And from a risk manager's perspective, the information available from Firm B's accounting of expected losses provides a far richer information set and the possibility to take mitigating action if the risk of an S4-type scenario is considered material.

The Moody's Analytics CreditEdge model provides a suitable framework for IFRS 9 compliance with C&I exposures.5This example uses the EDF metric, which provides an unconditional firm-level PD with a tenure of one to 10 years, and the Stressed EDF satellite model, which uses the core EDF metric to provide a firm-level PD forecast conditioned on any economic scenario. Stressed EDF already produces monthly forecasts conditioned on the Moody's Analytics scenarios described above, and so is well-suited to this purpose. In this example, we may decide IFRS 9 stage allocation by comparing the unconditional EDF at the reporting date with EDF at origination to determine whether a significant deterioration in credit risk has occurred. A suitable criterion, such as if a firm's implied credit rating has deteriorated by, say, three or more notches, would determine stage allocation. Once an instrument has passed into Stage 2, lifetime EL must be calculated and accounted. There are three options for performing this calculation, based on the discussion in previous sections:6

All three options may be suitable in different situations, depending on the relationship between credit risk and the macroeconomy and the desired objective of the reporting process. Figure 5 summarizes the results using the two-year cumulative PD from each approach.

In this article we have analyzed the use of macroeconomic scenarios as part of the forward-looking, probability-weighted IFRS 9 framework. Some of the key questions around the practical use of alternative scenarios and their probabilities have been answered, and a case study illustrates these concepts in practice. We argue in favor of leveraging a handful of alternative forecasts in order to comply with recent regulation. The shape and severity of the scenarios can vary over industries and firms, but the regulatory language is fairly clear when requesting the need to account for alternative outcomes under a probability-weighted framework.

6 The IFRS staff paper outlines three approaches that broadly mirror the three options, plus a fourth possibility which uses the modal or most likely economic scenario in combination with a qualitative overlay. Our recommendations borrow heavily from this directive. 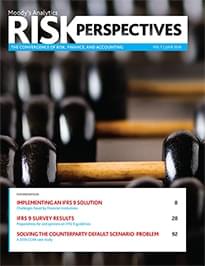 Analyzes IFRS 9, delves into its effects on future impairment calculations, and provides recommendations on how financial institutions can implement and leverage forward-looking credit loss models.

Presentation slides from the Council of the Americas CFO Forum of 2020.

We use the UK Mortgage Portfolio Analyzer to assess the adverse economic impact from of the global pandemic on a representative portfolio of the UK mortgages.

COVID-19: Living Through the Stress Test of the U.K. Mortgage Market

We use the Moody's Analytics Mortgage Portfolio Analyzer to quantify the impact of this significant economic stress on a portfolio of U.K. mortgages.

As COVID-19 spreads globally, fear and uncertainty are rising, roiling financial markets and pushing the global economy towards recession. This report uses Moody’s Analytics CreditEdge™ public-firm EDF™ (Expected Default Frequency) metrics to assess the impact that the coronavirus has had so far on credit risk.

The COVID-19 Pandemic: Assessing the Impact on Corporate Credit Risk

In this webinar, we will use Moody’s Analytics EDF metrics to assess the impact COVID-19 has had so far on corporate credit risk.