There has been a lot of news analysis regarding the Basel Committee’s direction to revert back to standardized approaches to assess risk-weighted assets, including constraints on the use of internal model approaches when assessing structured securities within the credit risk capital framework. While the impacts of this proposal may change the way internal models are formulated and utilized by banking institutions in structured securities analysis, we do not believe they will be abandoned anytime soon. The article focuses on the proposed changes and their implications for calculating credit risk capital, as well as the proposal’s integration with Basel’s other recent revisions and upcoming initiatives. The article also discusses what next steps are expected with regard to this proposal.

The Basel Committee on Banking Supervision (BCBS) published a consultative document on March 24, 2016 titled, “Reducing variation in credit risk-weighted assets – constraints on the use of internal model approaches.”1 This reduced reliance on internal models is consistent with the language expressed or implied in other recent publications such as the recently finalized fundamental review of the trading book2 and the recent amendment to the Basel III securitization framework.3 The proposed changes are intended to reduce the complexity of the credit risk regulatory capital framework, bring internal models in line with market risk proposals, and address jurisdictional differences in their calculations. The proposed changes are not specifically intended to increase capital requirements; however, that seems to be an effect.

Per the Basel III final rule, all banks are subject to the standardized approach (SA) to calculating capital. This approach allows capital to be calculated with a minimal number of inputs derived from a bond’s current credit enhancement, serious delinquencies, and external ratings where approved. This, however, introduced major differences in the calculation based solely on a bank’s jurisdiction. It has either been adopted using the simplified supervisory formula approach (SSFA), which is utilized in the United States, or the external ratings-based approach (ERBA), primarily used in Europe. The same bond can have a very different risk weight result depending on where it is calculated.

The Basel Committee aimed to level the playing field by issuing a revision in July 2016 to the Basel III securitization framework which also incorporates an alternative capital treatment for simple, transparent, and comparable (STC) transactions. The European Commission went a step further, developing similar but slightly more exhaustive criteria for securitizations considered simple, transparent, and standardized (STS).4 Both frameworks help bolster the securitization market as a viable funding source, bringing it more in line with covered bonds which have benefited from more preferable capital treatment. It is expected that the criteria within the STS and STC standards will standardize going forward.

The goal of the revised framework is to incentivize transparency and simplicity in structures, while also reducing the potential for regulatory arbitrage globally. The new approach presents a variation on the current standardized approaches that is more conservative than the current formulas for non-STC and non-senior tranches. STC tranches would, however, benefit from a lower potential capital floor (10% for senior tranches and 15% for non-senior tranches).

Advanced models are thought to be difficult to develop and support, and they are perceived as less transparent or easy to regulate. Critics contend that one can “game” the system with a model that is difficult to understand, quantify, and regulate by a governing body that was not involved in its creation. This perceived lack of transparency has spooked regulators, leading them to signal to the market that they intend to severely limit or even phase out the use of advanced models altogether.

To better understand the differences, see Figure 1 for a comparison of the current hierarchy with the newly amended hierarchy among advanced banks by jurisdiction. Figure 2 is an approximation of what three asset-backed security (ABS) bonds might look like under the new Basel III standardized approach with STC. 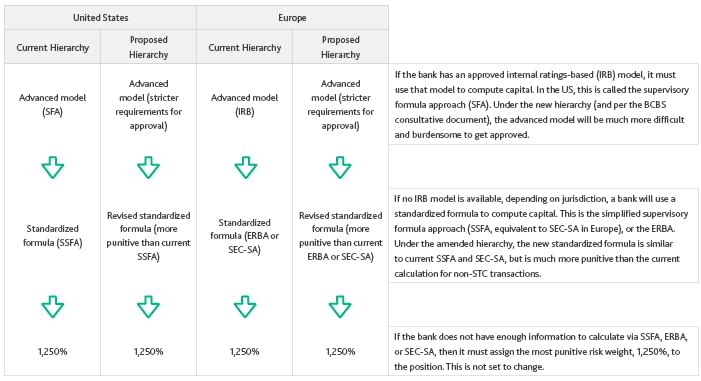 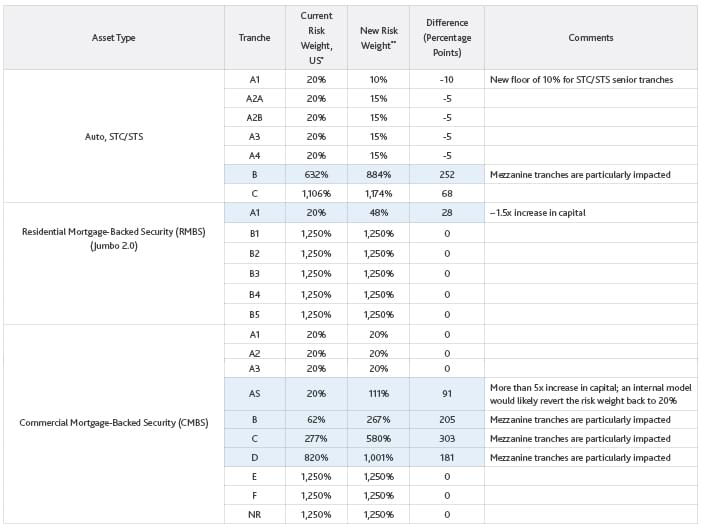 The BCBS is heavily pushing acceptance of its revised standardized approaches for both market risk and credit risk, irrespective (and perhaps because) of the forecast increases in capital. It is now coupling that with the proposed constraints on the use of advanced models, and it seems to be trying to temper the increases in capital with less punitive calculations for transactions deemed STC/STS. While this all seems very reactionary to the current regulatory and political environment, we believe advanced models will always have a place in advanced banks, as their benefits far outweigh the hurdles necessary to create, validate, and maintain them.

With the introduction of the amended Basel III rule, the standardized approach for non-STC transactions will effectively force banks to exit some lines of business that will no longer be profitable. However, an advanced model may allow for a more favorable capital result and thus a “stay of execution” for certain businesses. In addition, advanced models provide needed insight into the underlying collateral pools, and they forecast risk and sensitivities much better than a standardized formula ever could, no matter how much banks tweak it. The intelligence gleaned from an advanced model is not just used for regulatory capital, but also for internal profitability metrics and analytics, as well as resource allocation decisions.

Now let’s turn to the regulatory capital impacts. Figure 3 shows a recent Pillar 3 disclosure published by JPMorgan Chase. The Pillar 3 disclosure is meant to enable the market to gauge the capital adequacy of an institution by providing details on the scope of risk exposures and giving further insight into the internal management of risk. Figure 4 summarizes the differences in approaches from Figure 3 in the 20-50% bucket. It is in these risk weight buckets, non-senior middle-of-the-capital-stack tranches, where advanced models typically make the most impact.

Coincidentally, in this example, the difference in calculated securitization exposure between SFA and SSFA was only $2 million. However, the blended risk weight difference was almost 9 percentage points between advanced and standardized approaches. This difference meant an additional $337 million, a 38% increase in risk-weighted assets (RWA) over the advanced approach. This illustrates how a relatively small difference in calculated risk weight (9 points) can have a major impact (a $337 million increase in capital) at a large global bank. The resulting increase in RWA from the standardized approach, even in its current form, would prompt bank management to consider shifting focus to more profitable lines of business, potentially cutting off origination and support business on a number of asset classes.

In closing, so long as there is a mandate or even an option, we believe there will always be a strong incentive for advanced banks to develop and utilize an advanced model. The industry reaction to the BCBS consultative document has been swift and unsurprisingly unfavorable. The Institute of International Finance, an industry lobbying group representing most major industry players, issued a response letter on June 3, 2016 detailing how “reducing the alignment of capital and risk could negatively and unnecessarily affect the availability and pricing of credit to the economy.”5

As you might expect, if implemented as drafted, the proposal will have major impacts on the types of financial products available. It seems simple: It is counterintuitive to the BCBS’s goals to remove a bank’s incentive to develop and maintain advanced models that attempt to adequately and thoughtfully assess risk profiles. Trying to encapsulate everything in a one-size-fits-all standardized approach, now with many more layers and carve-outs for STC transactions, would not level the playing field; rather, it would create another distortion and likely lead to structural changes in the market and the shrinking of certain asset classes. In many cases mezzanine tranches would be overstated when using the new standardized approach due to its much more punitive calculation (as illustrated in Figure 2). Riskier assets may see the opposite effect, as more granular loan information will not be utilized and the new standardized approach may give a less conservative answer.

As such, there may well be incentives for banks to move toward riskier assets to make up for the additional charges, the opposite of the BCBS’s intent. Without a doubt, there will be a shift internally at all banks to optimize their risk and profitability at the desk level, and some origination businesses will be heavily constrained or even shut down. In order to maintain current levels of profitability, advanced banks will need to go through whatever hoops are necessary to have IRB models approved. Don’t expect them to go away anytime soon.

Cecilia is responsible for model design, model development and model implementation of retail credit models in the EMEA region.