More than two years after its publication by the Basel Committee, and a few months before its scheduled adoption, the new standardized approach for measuring counterparty credit risk is still in the process of being implemented. This article provides a brief introduction to this method, its expected benefits, and its actual impacts. It also details the potential difficulties associated with its implementation and the current status of its adoption in member countries.

The standardized approach for counterparty credit risk (SA-CCR) is a new computational method for exposure at default (EAD) under the Basel capital adequacy framework. It is due to replace both the current exposure method (CEM) and the standardized method (SM) starting January 1, 2017. Introduced by the Basel Committee for Banking Supervision (BCBS) in September 2013, it aims to address weaknesses in margining recognition, sensitivity, simplicity, and uniformity across national authorities.

This is the new SA-CCR formula for computing EAD:1

SA-CCR inherits the 1.4 alpha factor from the Internal Model Method (IMM), used to obtain a loan-equivalent exposure conversion. Note that national supervisors may use their discretion to require a higher alpha based on a firm’s counterparty credit risk exposures. Furthermore, banks may seek approval from their supervisors to use internal estimates of alpha, subject to a floor of 1.2.

It also differentiates margined and unmargined cases, in the computation of both replacement cost (RC) and potential future exposure (PFE). RC is an estimate of the amount a bank would lose if the counterparty were to default immediately, while PFE reflects increases in exposure that could occur over time. PFE is the asset-classspecific product of a multiplier and an add-on. The new formulas allow for a better recognition of collateralization, as well as offsetting benefits.

SA-CCR supervisory factors and single-systematic-factor correlations have been thoroughly calibrated based on four exercises. The new add-on percentages are more conservative for equities and commodities, as shown in Figure 1. 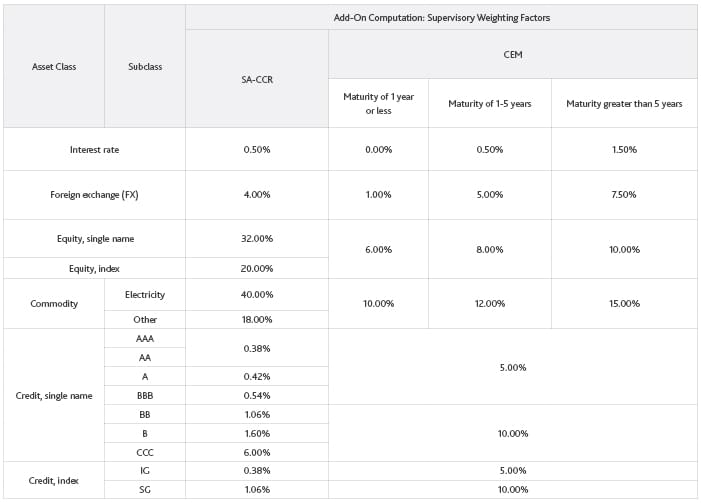 Successful implementation requires a full understanding of the hedging set concept and of the margining processing under SA-CCR. The computation of the PFE add-on component is the most complex, as it varies widely depending on the asset class and subclass, collateralization, margin set, and netting set considered.

Identifying, sourcing, and arranging all the input data required for these calculations presents another challenge. Ensuring that the results obtained running SA-CCR match the expected figures from a theoretical standpoint is equally tricky. Moreover, it is important to verify that the exposure differences observed with the use of CEM and SM methods are accurate.

We asked some of our client banks about their perspectives on SA-CCR. Their feedback is as follows:

Basel Committee on Banking Supervision. “The Application of Basel II to Trading Activities and the Treatment of Double Default Effects.” BCBS 116. July 2005.

Are Internal Credit Models for Structured Securities Going Away? An Analysis of the Recent Basel Consultative Document
Request More InformationMeet Our Experts