We present the final paper in the ongoing research analysis that we have been doing for two years, which lets us forecast whether banks would build, maintain, or release allowance into the next quarter. While the papers published for this study will end, the analysis is still being performed and available; interested parties should reach out to the authors or other Moody’s Analytics contacts for more information.

As it had in the prior quarter, in this final paper our analysis focuses on a couple of the asset classes that continue to experience the most volatility; commercial real estate and credit cards.

In Q1 2022, our upper-bound index for the peer group continued to decrease with an average of 1.76% as compared to 1.85% in the prior quarter. The lower-bound index however rose slightly, with an average of 0.46% as compared to 0.37% previously. While this is the first quarter in the study in which the two indexes (upper and lower bounds) moved in opposite directions, it is not unexpected given the current state of uncertainty in the market. Many banks are still lowering reserves that had built during the pandemic, but that rate has certainly slowed or even halted as rates rise and potential for a recession looms.

Despite the rise in the lower bound index however, overall reserve levels continued to decrease. Figure 1 shows the midpoint benchmark ratio overall, while Figure 1-A displays how the overall ACL percentage has decreased for every bank in this study. Additionally, nearly every bank continued to progress toward the midpoint this quarter. Both of these metrics indicate a continued release of reserves.

Our benchmark analysis began on March 31, 2020 and has continued every quarter since then; and while we continue to perform the study, this paper will be the final published piece in this series. Part of the reason for this is that the reserving levels at the banks in the study have begun to level now that the start of the pandemic is over two years behind us. And while economic uncertainty remains high, the volatility in the reserving levels has become far less. This can be evidenced by the marginal changes seen as look at our study quarter-over-quarter throughout the last 12 months. This is best shown in Figure 3 below as the change from Q4 2021 is in the low single-digit percentages for most of the banks within the study. The study will still be available as part of our product suite for Impairment and the ability to customize the peer group is now available, given the inflexion point in the business cycle the study will still provide a robust benchmark for peer comparison.

The story this quarter is that despite the continued uncertainty within the economy, including the effect of rising interest rates, the reserve releases continue. Within the benchmark analysis, this trend yields a continual movement toward the mid-point for many of the peer banks reviewed. Figures 2 and 3 illustrate this movement by showing that all but 2 of the 14 banks are within the upper- and lower-bound limits for the overall peer group. Additionally, as Figure 3 shows, all but 2 banks continued to decrease reserves this quarter.

For a summary of the methodology used to generate this benchmark study, see our original whitepaper.2

CRE portfolios have garnered a lot of attention over the past two years. Business closures, empty offices, and hotel shutdowns at the onset of the pandemic left investors in these portfolios with heightened concerns over credit deterioration. However, many property types and locations fared relatively well, and the US government provided much-needed support that trickled down to the net operating income of CRE properties. As a result, reserves for CRE portfolios slowly started to be released over 2021 as investors grew more comfortable that the worst may be behind them. However, the CRE portfolio remained one of the slowest to see releases.

In Q1 2022 releases continued in the CRE portfolios, including half of the banks releasing at double-digit percentages. Figures 4 and 5 paint a picture of how the peer group releases continued. In particular, Figure 5 highlights the percentage change from the previous quarter. One thing to watch, given the recent rise in rates, we could see a reversal in reserving in this asset class unless Net Operating Income can keep up, a DSCR of 1.1 might not fare well in the event of a renewal at rates that are much higher unless rent inflation kicks in enough to maintain said DSCR levels. 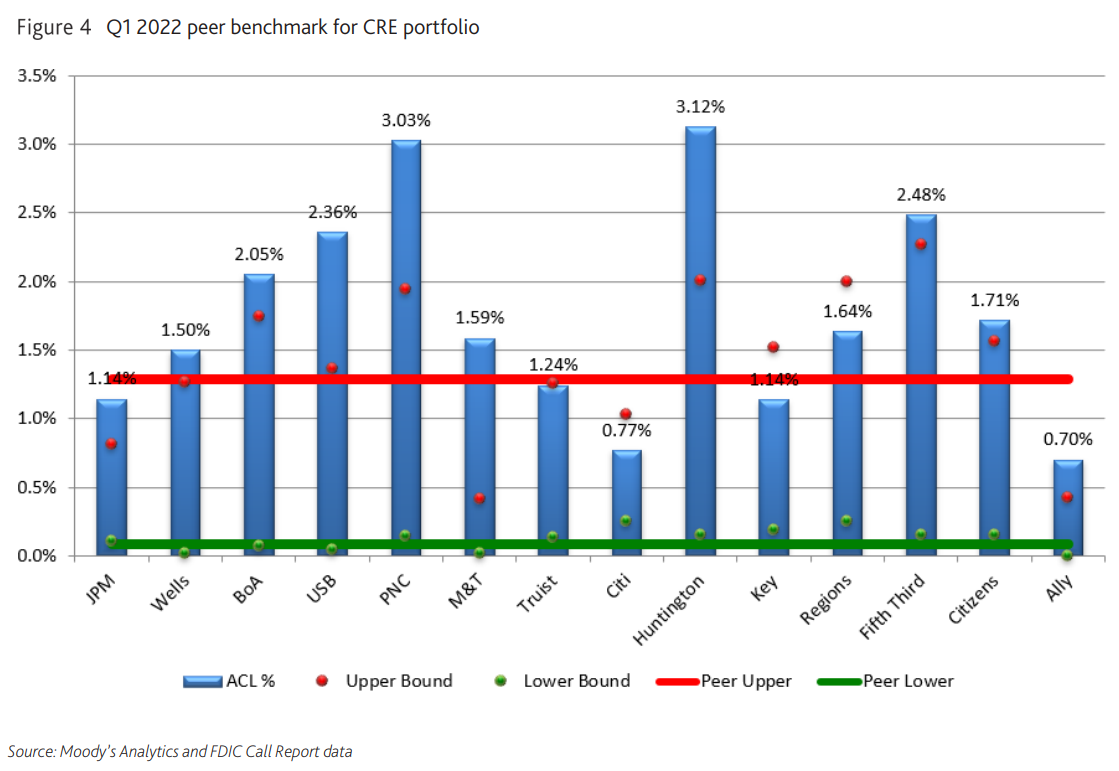 The credit card portfolio is another segment where reserves significantly increased early in the pandemic when unemployment skyrocketed. Because they are unsecured, credit cards usually experience much higher levels of defaults than other forms of credit—and we saw a reserve build commensurate with that expectation. As in the commercial real estate market, the losses did not reach the levels initially expected, owing to economic recovery and government stimulus.

Credit cards are an interesting product in this current quarter as they experienced reserve increases or leveling in many of the banks in the study. As concerns continue over inflation, rising rates on the debt and a potential recession this unsecured consumer debt saw modest reserve increases. While the concerns themselves were not unique to credit cards, the overall increase or flattening of the reserve balance was. Figures 6 and 7 illustrate the peer group’s current ACL reserve ratios for Q1 2022.

We sought to produce in a practical way an upper- and lower-bound index that could reasonably indicate the level of reserves of a set of peer banks. This eighth and final paper in the benchmark series shows that a triangulation index built on heuristic measures for both a peer group and a bank can enable management to understand where they are relative to peers in their reserve practices.

Comparing ACLs from different call reports and historical experiences during the Great Recession is almost impossible, given the undisclosed underlying assumptions (weighted average portfolio life) and the difference in portfolio composition. Furthermore, economic uncertainty, unclear timing of net capital outflows, and government support affect banks in various ways. Thus, it is vital to understand the parameters of your allowance and know where you stand with respect to your peer group—whether you are above the upper bound or below the lower bound. Such knowledge is crucial for managers.

We have automated the process of building the triangulation index based on the outlined measures. We can therefore conduct this analysis on any peer group and at a portfolio level within days. If you have tried to find a reliable benchmark range for you and your peers, feel free to contact us. We offer executive management a view on the array of possible results, especially when internal model reliance is brought into question. The full analysis for this quarter is available on request, please contact the authors for such at scott.dietz@moodys.com.

1 The higher the ratio, the more reserve coverage a given bank has with respect to its own midpoint benchmark—giving a relative view of the bank’s reserve levels based on its own historical experience.
2 "CECL Build – Is it Enough?”