By Laurent Birade, Phillip Lai
Loss Accounting: CECL
Note: In the initial version of this article, we used simple averages to compute rates across banks. This version uses weighted averages. Although each has its pros and cons, this article provides a reference. Using the median measure would be another way to eliminate outlier impact.

As US financial institutions have filed their allowance estimates for Q3 2020, we have compiled results from CECL adopters​1 that follow the Current Expected Credit Loss framework, and the non-adopter banks that follow the Incurred Loss Model (ILM) framework, to provide a view of the potential impacts of adoption after the Day 1 true-up that occurred on January 1, 2020. We present the analysis to show how the allowance fluctuated over the past three quarters overall and by high-level product category.

At first glance, the numbers reveal that CECL on average has increased the allowance set aside by 30% to 40% over the past three quarters, but we can already see differences start to emerge depending on bank size. A common interpretation among 2023 adopters is that CECL will be cost-punitive, so we should adopt at the last minute—but this may not always be true. This paper takes a deeper dive into product categories to elucidate that CECL may not be linear in the expected allowance increase, and that product category and concentration matter. This updated version includes updates for each product-level heatmap that was previously based on simple averages rather than weighted averages. Our commentary is updated accordingly, which leads to significant differences in interpretation. 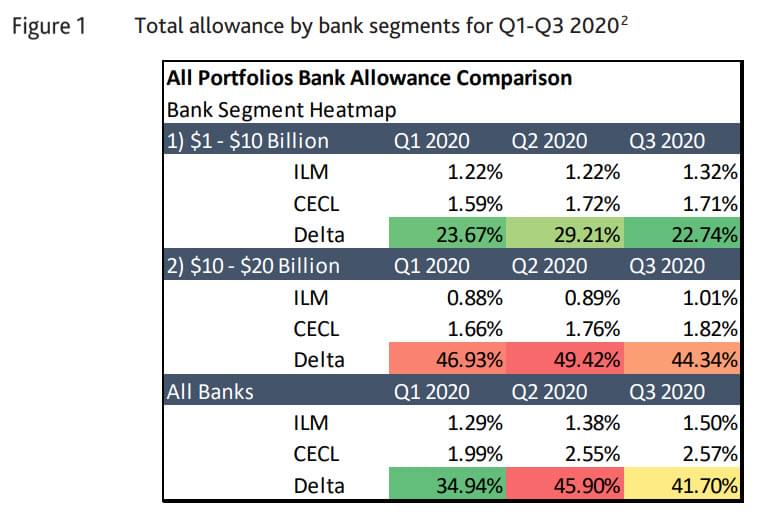 We tracked each institution’s allowance for loan loss estimates and amortized cost as reported in the FDIC Call Report (RI-C schedule) for both adopters and non-adopters. Off-balance sheet exposures and reserves for unfunded commitments are excluded from this analysis. The analysis focuses on the group of banks with less than $20 billion in assets, although we have compiled the statistics for the entire universe of banks across the United States.

We summarize the banks’ weighted average3 allowance results by the following categories based on total asset size as of September 30, 2020 (Figure 1).

Distribution of allowance rates under both CECL and ILM

The allowance ranges across institutions—regardless of methodologies being used—can change drastically based on but not limited to portfolio composition, asset quality, loan contractual terms, management judgment, and (where applicable) scenario assumptions and mean reversion methodology. Although CECL model assumptions make it tough to compare directly with ILM, some of the key factors include weighted average life (WAL) versus loss emergence period (LEP), which provides a direct comparison for how long one applies a credit factor to the portfolio. The lookback period upon which a probability of default (PD)/loss given default (LGD) is conditioned under the ILM approach is now contrasted with the forward-looking, scenario-conditioned PD/LGD that CECL requires. These two variances alone could help explain a lot of the differences we observe in our analysis.

Distribution of all allowance rates shown in Figure 2 offers a glimpse of the bank-level allowance dispersion across category size. As noted in the introduction, the average allowance seems to be materially higher in the category predominantly applying the CECL framework for the allowance ($20 billion and above). However, we note the number of outliers in the smaller banking categories, which may not preclude the fact that some banks may actually have a level of allowance that could decrease under CECL upon adoption. The three questions we want to answer are:

1)  Which portfolio concentration and what type of attributes may attract lower levels of allowance under CECL?
2) Does CECL increase volatility across all categories of the allowance portfolio?
3) Should 2023 adopters think about early adoption or at the very least parallel runs?

The All Banks category in our assessment for construction portfolios (Figure 3) saw allowance differences increase over the past three quarters from 1.79% to well over 30%, but seems to be stabilizing as of Q3. We note the marked difference between the $10B to $20B category and the $1B to $10B category as of Q1, but both categories now fall in line with the overall bank average of a 30%+ increase between the CECL and ILM methodology. Typically, a bank moving from the ILM method to CECL should expect a significant increase in its allowance under similar conditions. Here, we observe that the differences became acute as the COVID19 stress took hold. 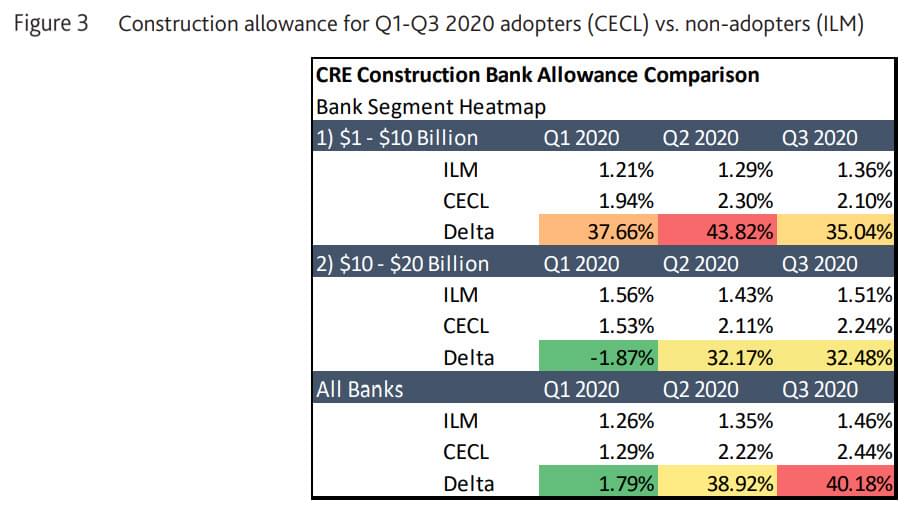 The All Banks category in our assessment for CRE portfolios saw allowance differences increase significantly over the past three quarters as in the construction segment. We note that the difference in this category showed that the CRE portfolios attracted much less allowance starting in Q1 where ILM and CECL were almost the same—but as stress took hold, the difference grew very rapidly. This led to a difference of over 20%, which may indicate that overall, the ILM method was equivalent in benign times but was very slow in reacting to rapidly deteriorating economic conditions. 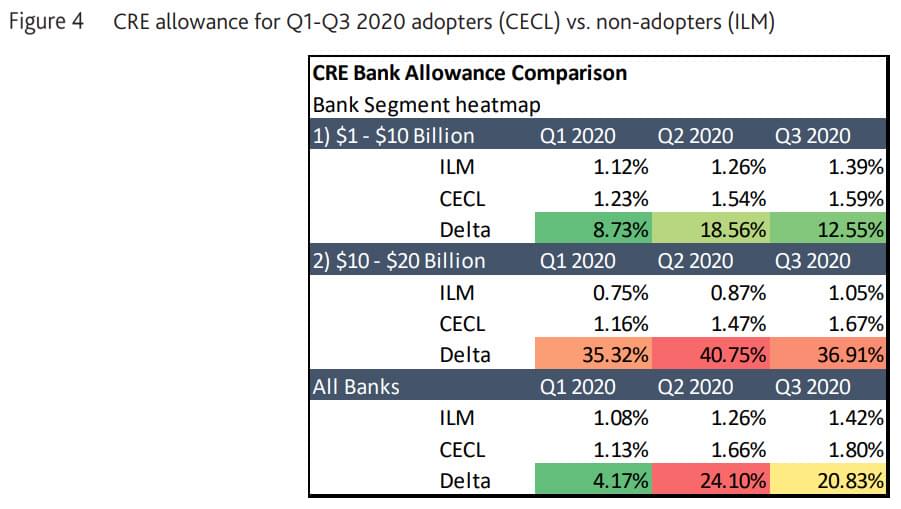 The All Banks category in our assessment for Commercial & Industrial (C&I) portfolios saw allowance differences increase significantly over the past three quarters, similar to the CRE portfolios. We note that the difference in this category showed that C&I portfolios displayed higher ILM than CECL in Q1, but the gap reversed dramatically as the COVID-19 stress took hold. We also note that the smaller bank segment allowance experienced an allowance reduction as credit spreads became tighter after the Q1 temporary explosion in spreads. This tightening in spread was driven mostly by Federal Reserve and government support of the economy. 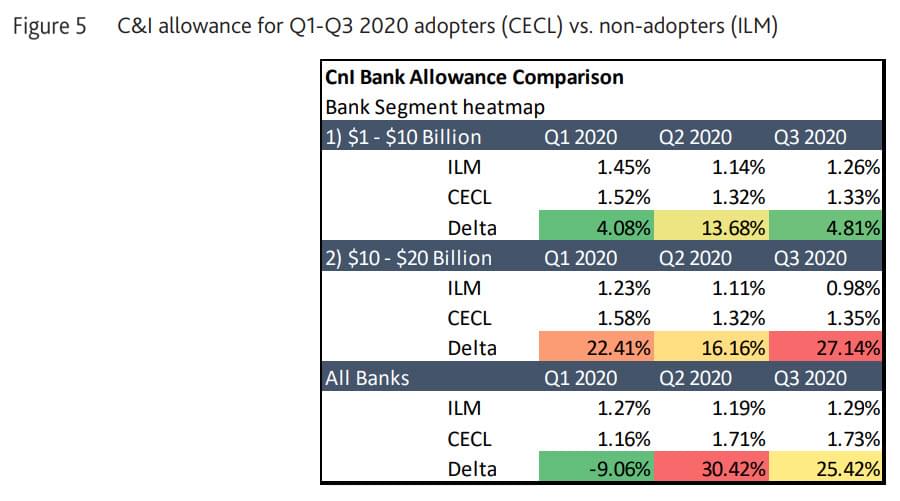 The All Banks category in our assessment for residential portfolios saw allowance differences increase modestly over the past three quarters from 19% to 24%, but seems to be on a downward trend as of Q3. These differences reflect a lower allowance under the ILM framework than CECL on a weighted average basis. 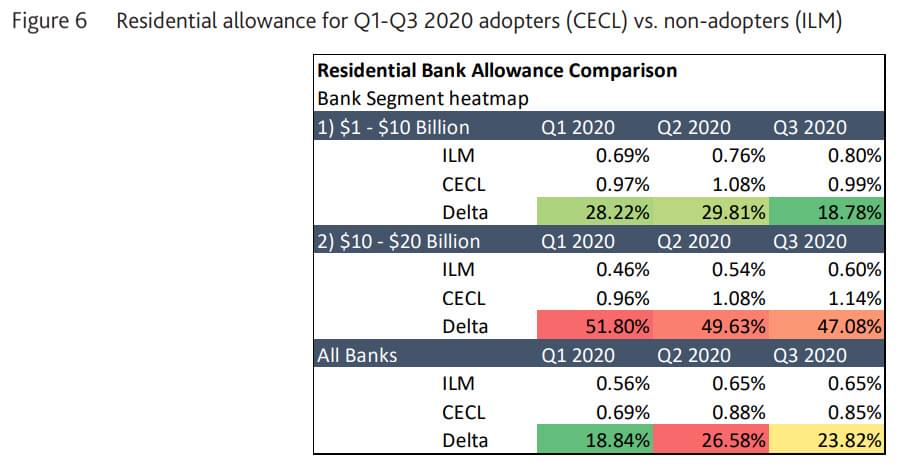 The All Banks category in our assessment for credit card portfolios saw the allowance differences remain elevated but stable over the past three quarters from 27% in Q1 to 28% in Q2 to 26% in Q3. These differences reflect a significantly higher allowance under the CECL framework than ILM. This is consistent with many of the larger banks with material exposure to credit card portfolios that had to build reserves with the CECL adoption at the start of the year. Credit cards typically have higher losses than most other types of loans along with a longer average loan life.

As shown in Figure 7, the $1B to $10B bank category experiences a shift with much lower reserves under CECL than ILM by -29% in Q1. However, in Q2 reserves were about the same under CECL than ILM within -0.05%, and then in Q3, CECL reserves were still higher but decreased to a -9% difference. The opposite is reflected in the $10B to 20B bank category, where credit card reserve differences were higher for CECL filers in Q1, decreased in Q2, and then jumped back up to more than 50% in Q3. The latter segment shows markedly higher allowance rates under CECL from Q1 on. 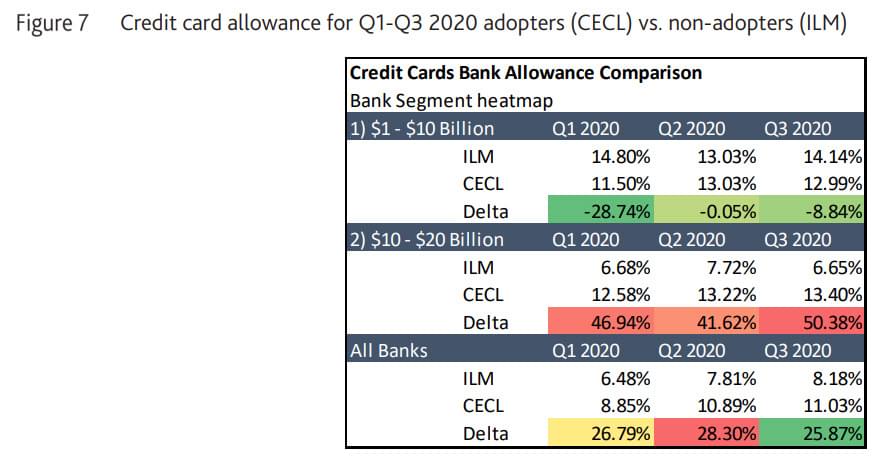 The All Banks category in our assessment for the other consumer loan portfolios saw allowance differences of over 50% in all three quarters. These differences reflect a higher allowance under the CECL framework than ILM. We do not observe any type of bump due to changing economic conditions as observed in the commercial segment. This would be due principally to heavy government support on both the income and forbearance side.

In Figure 8, the allowance difference under the $1B to $10B bank category decreased in Q2 due to the CARES Act support package but then ramps back up as of Q3. Differences went from 29% in Q1 to 19% in Q2, and then back up to 29% in Q3 2020. The $10B to 20B bank category, where reserves are significantly higher under CECL than ILM, saw a small increase in difference in Q2 but a large drop in difference in Q3 largely due to the fact that the ILM allowance was catching up to CECL going from 0.92% to 1.71% in one quarter (Q2 to Q3). 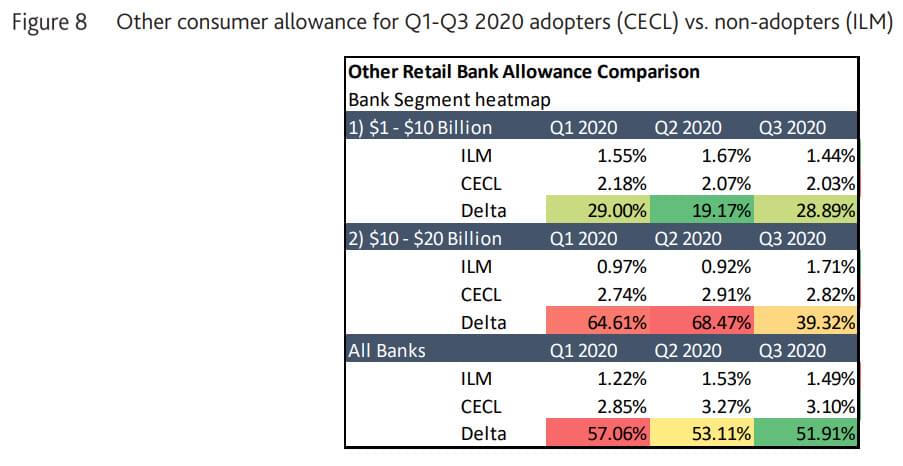 Our analysis helped us dig deeper into whether CECL always leads to levels of allowance that are larger and more volatile than under the ILM. The data presented in this paper shows that it is highly dependent on the portfolio type, where we found that at times the Construction and Credit Card portfolios attracted lower levels of allowance in the aggregate—but those occurred mostly in benign times prior to the COVID-19 ramp up.

We also ran some analysis (over a three-quarter period which, admittedly, is a very small sample) to show that CECL is not always more volatile than ILM. Specifically, CECL is more volatile overall, but for the C&I, Other Consumer, and Credit Card portfolios, we found that ILM produced higher levels of volatility across most categories presented in the analysis. Conversely, Construction and CRE CECL estimates were more volatile than ILM.

The preceding analysis is meant to help 2023 adopters digest the potential impact that the new accounting standard may have. It is also intended to give a high-level assessment to assuage concerns over delaying CECL adoption because it is cost-punitive. CECL is much more than just an accounting standard; when implemented with conviction, it serves as a catalyst to begin a transition toward better credit risk management that can help fine-tune strategies and drive enhanced return on capital.

1 CECL adopters consist of all Public business entities as defined by the FASB, plus any early adopters of the CECL standard.

3 A Note: all banks with zero balances for loans and leases in any product categories were not included in the weighted averages so as to not overly bias our results to the downside.

4 Note that in the original paper where we used simple averages, the conclusions are quite different when using weighted averages.