Russia’s military invasion of Ukraine has led to turmoil in the global financial markets, causing rippling effects for credit risk across countries and sectors.

The Russia-Ukraine military crisis has sent shockwaves throughout financial markets, causing credit risk, as measured by Expected Default Frequency (EDF™) metrics, to rise extensively across the board. However, the extent of the rise in default risk varies significantly by industry and country. Thus it is imperative for risk and portfolio managers to understand credit risk fluctuations in supply chains, financial systems, and capital flows, as well as geopolitical factors, for assets influenced by or connected to the military conflict. With a broader knowledge of the key drivers behind the changes, risk managers can formulate an appropriate strategy.

The credit risk impacts of the Russia-Ukraine military conflict have varied by industry and country. Flight to safety and sanctions have led investors to move capital from certain industries or regions to mitigate risk. The recent surge in energy prices has severely impacted business operations in transportation industries, while benefiting energy producers. Already strained supply chains have become further constrained, putting further upward pricing pressure on consumer goods, both retail and wholesale, and on the lumber and forestry industries. Of particular concern from an economic perspective, rising energy prices and new supply chain risks may push inflation higher and make it linger longer, undermining an already tenuous global economic recovery from the Covid-19 pandemic.

To capture changes in credit risk, we look at EDF measures for 10 countries and 10 industries from February 16, 2022 to March 7, 2022.1 The looming threat of the invasion of Ukraine, followed by financial sanctions and recession for some, have plagued countries and industries with high exposures to the region for weeks. We consider the average EDF change for countries as depicted in Figure 1.2 Company risk has been greatly elevated in countries neighbouring Russia and Ukraine, as risk aversion has led investors to move assets to safer countries and industries. This step has affected many European countries due to European bank exposure and energy security concerns. Targeted sanctions hitting Russian banks with cross-border transactions have severely affected finance companies, especially in the European Union, where many banks such as Credit Suisse have experienced record write-offs due to the freezing of in-Russia assets, with many banks writing off asset values entirely. The outflow of capital from the region has benefitted countries such as Bermuda and the Cayman Islands, which serve as offshore financial centers and have fixed currency relations with the US dollar.

Moreover, the Russia-Ukraine military conflict has disrupted the global energy market, with rippling effects across many industries. On March 7, 2022, the Brent crude oil price surged to a 14-year high of nearly $140 per barrel, as the market reacted to supply disruption from Russia and the unwillingness of OPEC+ to increase production. We consider the average EDF value change by industry, as depicted in Figure 2. As a result of the spike in energy prices, oil- and energy-intensive industries continue to be hit hard, including air transportation, trucking, and travel, among the worst performing industries in terms of percentage EDF change since February 16. At the same time, oil, gas, and coal exploration/production, utilities-gas, and mining have weathered the geopolitical crisis, benefiting from the surge in energy prices, leading up to and after the sanctions, and start of the military conflict on February 24. As expected, oil-rich countries in the Middle East— Kuwait, Qatar, Oman, UAE, and Bahrain—are all among the best performing countries. Although the price of oil has retreated, constrained supply and the possibility of escalation of the military conflict are likely to support higher volatility in the energy supply markets. 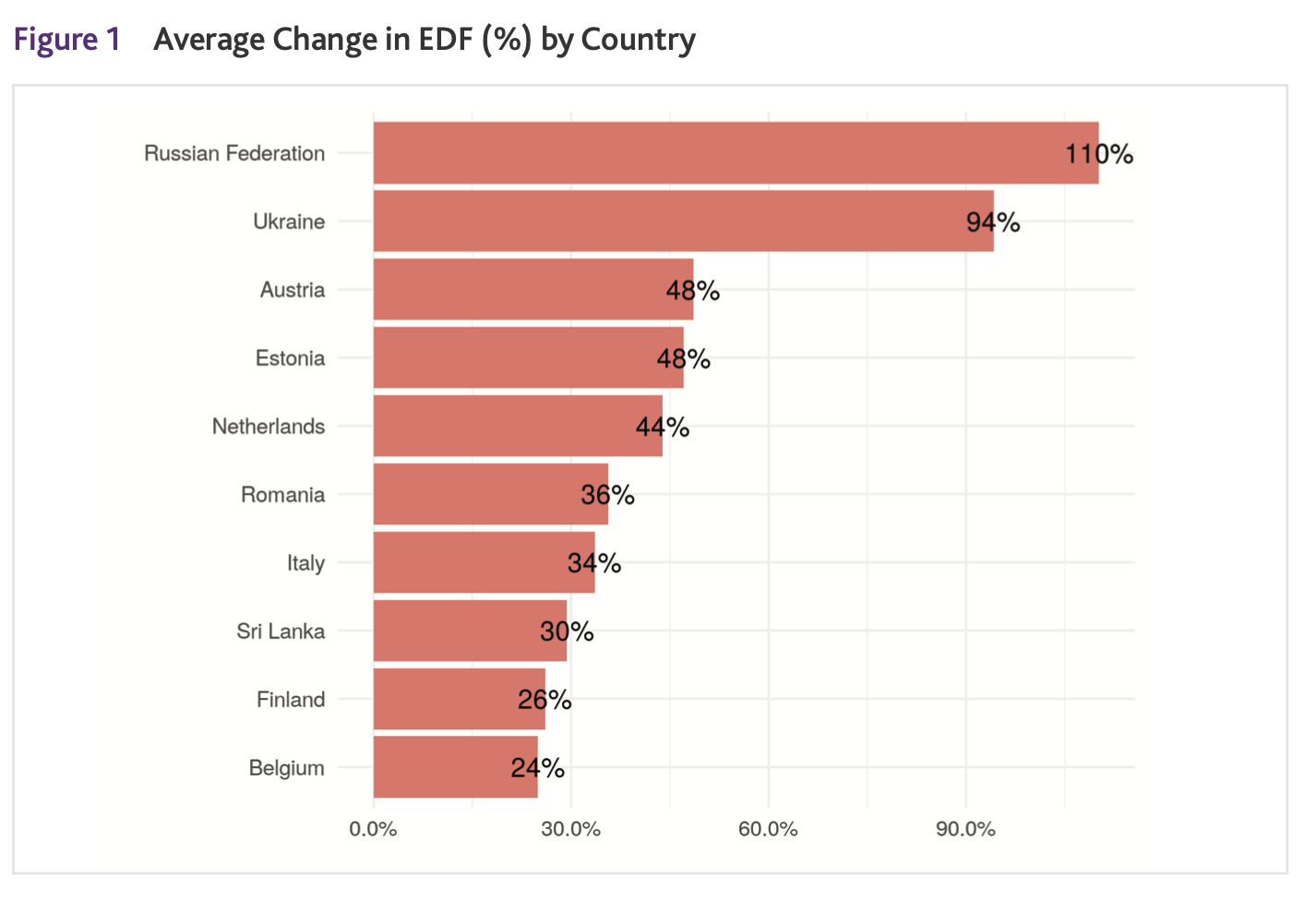 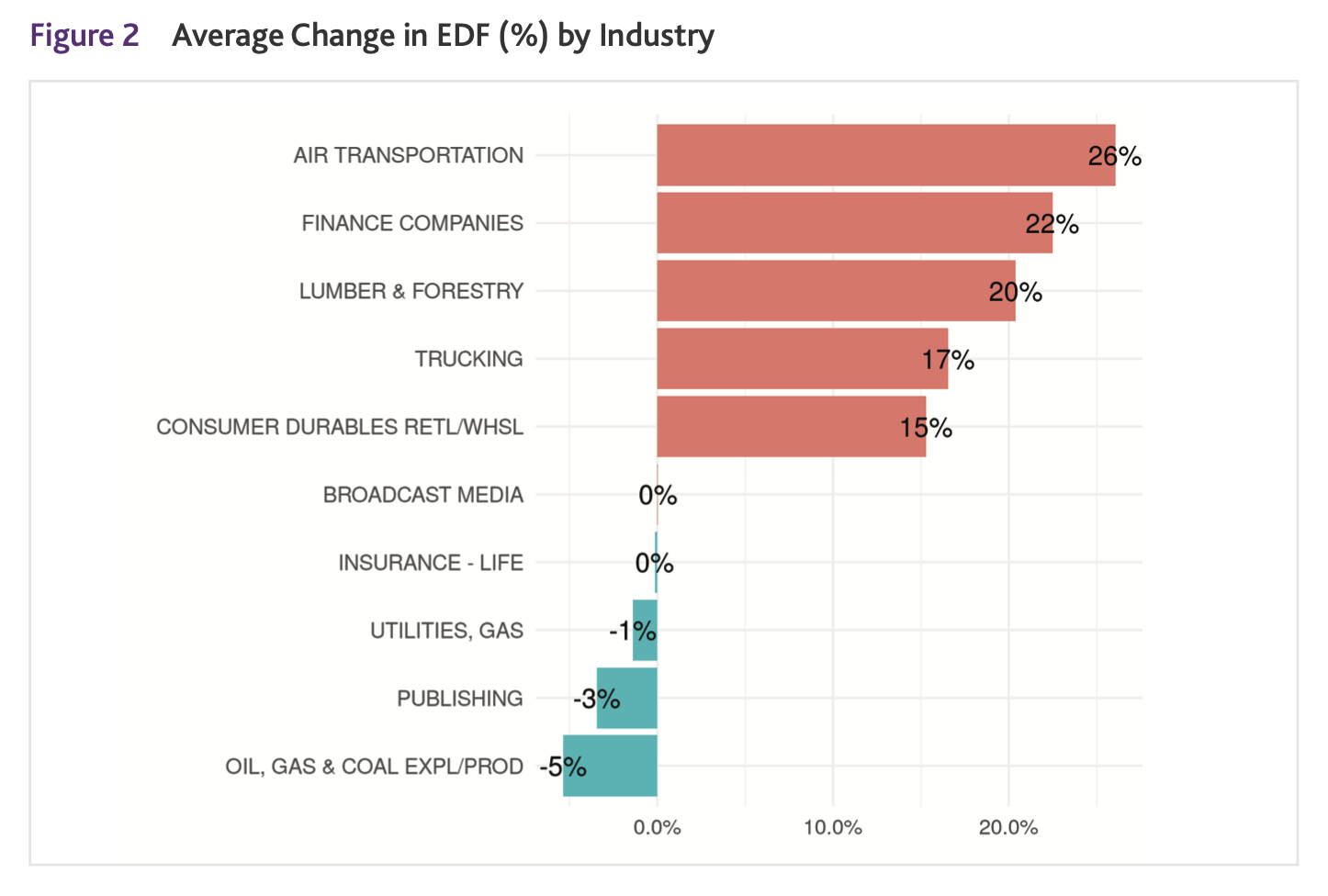 Take the automobile industry: It has been recovering from a semiconductor shortage since the pandemic started in spring 2020. Its EDF change is largest in Turkey, Sweden, and Germany, which are reliant on Russia for imports and far away from alternative suppliers in South America and Asia. Whereas Taiwan, Korea, and Vietnam all experienced much smaller EDF increases, as they have access to alternative suppliers.

The geopolitical crisis will have much larger potential macroeconomic and humanitarian consequences. Rising energy prices and new supply chain risks will add to inflation pressures, and lead it to linger longer, undermining an already fragile global economic recovery from the pandemic. Leading up to the conflict, inflation had already been high due to supply constraints and demand surges. In some parts of the world, supply constraints could result in outright scarcity or extreme price rises for essential goods (e.g. wheat). We observe increased EDF changes for many consumer- and business-related industries globally—apparel and shoes, consumer products, computer software, business services, and business products wholesale, just to name a few. This suggests increased pressure on consumer and business budgets that may pose a risk to the global economic recovery and increase the likelihood of a recession.

1 We choose February 16 to avoid using a date where the full extent of the military conflict had been priced into the market. We have also conducted the same analysis using February 4 as the alternative benchmark date and our findings remain largely unchanged.

2 To avoid small sample bias, we examine only countries with more than 10 firms as of March 7, 2022.