Digitisation and Automation in Commercial Lending: Disruption without Distraction

Automation and data-driven analytics have become part of our daily lives. Banking is no different. For example, a credit card application can be approved within minutes, and even a mortgage application can be pre-approved within a few days.With the growing influence of fintech on retail banking platforms, the banking sector worldwide benefits from data-driven analytics and credit-decision automation for money transfers, payment services and product recommendations to enhance customer relationships. Interestingly, however, we have seen few breakthroughs in commercial and corporate lending, which have remained largely unchanged by the technological advances since the early 2000s.

The technology lag within commercial lending stems from fundamental differences in the nature of commercial and consumer credit. Consumers are both far more numerous than companies and, by and large, financially simpler, with financial characteristics easily categorised and quantified. It is therefore no surprise that consumer credit data has long been highly standardised and readily available in machine-readable form. Commercial financial data, on the other hand, has heretofore been collected largely on a case-by-case basis from, for example, printed financial statements in varying forms, produced to a variety of standards and qualified with explanations readily intelligible to human accountants but not to machines.

Because of the sheer number of borrowers in a typical consumer credit portfolio, systematic data collection pays large dividends relatively quickly. A database incorporating just a few years’ worth of consumer credit behaviour provides statistically significant samples for all sorts of borrowers’ credit trajectories. In contrast, the relatively small number of borrowers in a commercial portfolio, spread out over a larger array of products, may, even after many years, only sparsely quantify the credit space.

Most banks’ consumer credit exposure falls into a relatively small number of standardised product types, eg, credit cards, home mortgages and auto loans. Commercial lending, on the other hand, is often relatively bespoke, making systematic data collection and interpretation much more difficult. Manual refinement of a model generated commercial credit rating is needed, as often as not, to account for factors beyond the scope of the model: in and of itself, this step alone can make automation seemingly impossible.

As though the preceding hurdles arising from the very nature of commercial credit itself were not enough, the monolithic credit systems implemented by many banks in the late 20th century are impeding progress, due to their inflexibility.

Fortunately, innovations in database design and in both the structure and deployment of software have provided opportunities for advances. Not only does the field of artificial intelligence (AI), after years of unfulfilled hype, now offer concrete benefits in gathering and handling data and building more flexible systems, but software management innovations can assist in the task of introducing new systems and keeping them up to date.

This chapter begins with a quick overview of commercial lending as practised at the time of writing, largely without the benefit of automation. We next discuss digitisation, a key prerequisite for automation. We follow this by looking at the crucial but often touchy aspect of introducing automation into human-based systems.Finally, the foundations laid, we consider the design and implementation of automation in a commercial-lending environment. 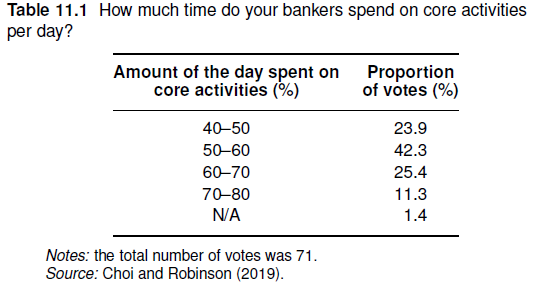 OVERVIEW OF COMMERCIAL LENDING
In 2015, McKinsey and Company reported that 45% of business activities could be automated (Chui et al 2015). In a more recent Moody’s Analytics webinar hosted by the American Bankers Association (Choi and Robinson 2019), most bankers reported that they do not focus on core lending activities such as spending quality time with prospects and clients, performing in-depth risk assessments, developing mitigation strategies and obtaining approvals(Table 11.1).

Our commercial lending solutions are flexible and robust enough to support whatever loan structures, pricing, or conditions you require to reduce risk.

Information technology automates the credit assessment and loan origination processes to increase efficiency and profitability over the loan life cycle.