Risk-Based Capital (RBC) dictates the minimum level of capital that insurers are required to hold, to allow them to fulfill their obligations to policyholders at a time of crisis. RBC is calculated based on two factors: (1) the size of the portfolio; and (2) the inherent riskiness of the financial assets and operations. RBC is intended to be a regulatory minimum and not necessarily the full amount of capital an insurer would hold to meet its objectives (NAIC, n.d.).

In the US, RBC is set by the National Association of Insurance Commissioners (NAIC) and then implemented by the state regulator. The NAIC’s RBC formula aims to identify weakly capitalized companies by establishing a minimum amount of capital to be held by insurers to avoid regulatory intervention. This minimum capital is intended to protect the insurer from the various risks that reduce statutory surplus. These risks include credit risk, deferral risk, subordination risk, and event risk (American Academy of Actuaries, 2015). C1 capital is intended to cover losses in an insurer’s investment portfolio in excess of those anticipated in statutory reserves, with those losses calculated at the 96th percentile portfolio loss and over a 10-year horizon.

The current C1 factors were originally proposed in 1992 and were last scrutinized in 2002. While the methodology was changed following the 2002 review, no changes were made to the bond factors implemented in 1994. Since the most recent analysis of these C1 factors in 2002, market conditions and investment patterns have changed significantly. The American Council of Life Insurers (ACLI), in conjunction with the National Association of Insurance Commissioners (NAIC), subsequently commissioned Moody’s Analytics (MA) to develop new C1 bond factors. These factors were approved in June 2021 and came into effect with 2021 year-end reporting. There are now 21 RBC bond rating categories, compared to the previous six categories.

MA provides a quantitative framework to forecast RBC and to estimate the uncertainty of RBC at a future horizon. The framework is built at the instrument level and is able to simulate RBC changes and RBC-related metrics for life insurer portfolios based on both coarse (old) and granular (new) NAIC rating designations. This research note explores the impact of the old and new C1 factors on RBC and on RBC uncertainty.

The C1 RBC factors for life insurers have now been updated. These updates came into effect beginning with 2021 year-end RBC reporting. The new factors are more granular and, in aggregate, are comparable to the previous C1 RBC factors, but with important differences at the individual rating level. 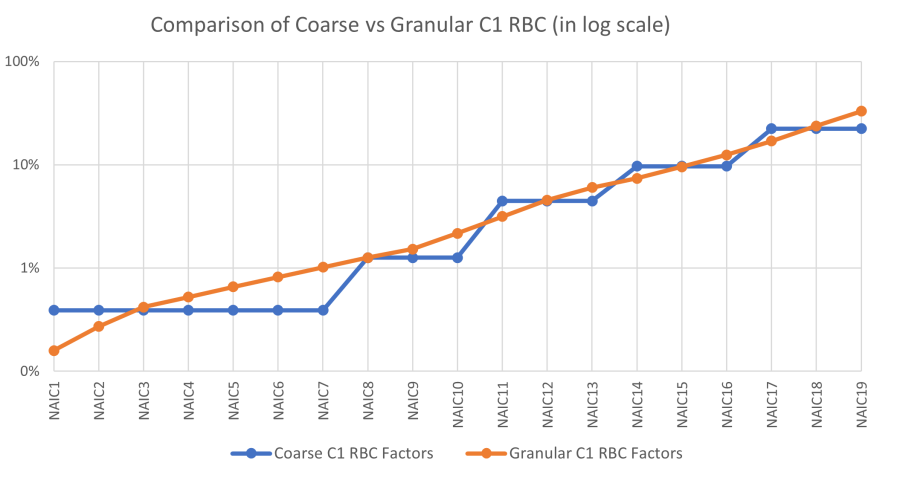 Calculating current RBC based on the credit quality of the portfolio is straightforward (in other words, map from the current NAIC rating to the RBC charge), but RBC projections must account for portfolio correlations, especially when trying to calculate RBC in the tail of the distribution of outcomes. MA’s proprietary correlation model helps life insurers simulate the uncertainty in RBC and related metrics at any horizon, leveraging historically-calibrated rating transitions alongside the Global Macro Correlation (GCorr™) model, and simulating systematic country/industry factors for each instrument in the portfolio, to estimate the distribution of credit quality at horizon. The MA model can accommodate both coarse and granular NAIC designations to project a credit portfolio’s RBC. Users can compare the impact of the new and old factors on their existing portfolios.

To demonstrate the impact of the new C1 RBC factors, we use a portfolio of 941 US publicly-listed firms rated by Moody’s. All analysis is done as-of 2021Q4. Figure 2 shows the distribution by rating category (left axis) and the RBC capital charge per NAIC category under both coarse and granular C1 RBC factors (right axis), as of 2021 Q4. The overall RBC charge under coarse C1 RBC factors is 5.30%, while under granular C1 RBC factors it is 5.49%, suggesting a moderate increase in capital in this example. 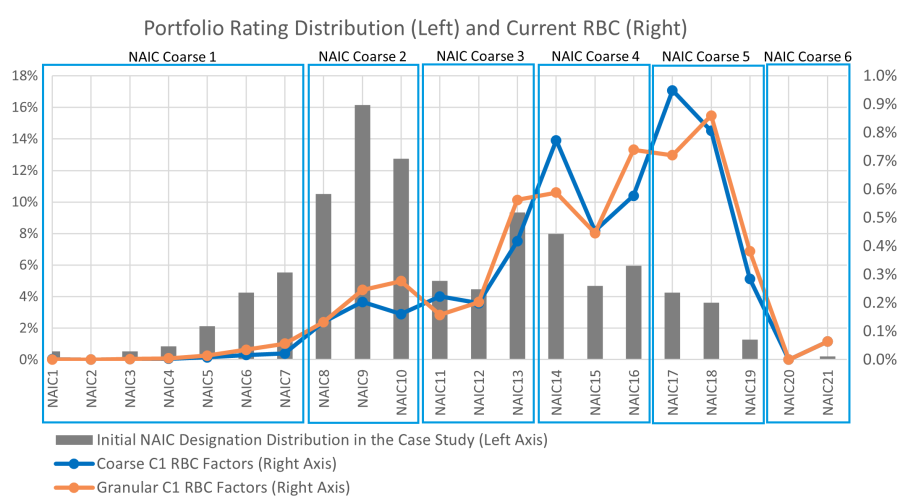 As a next step in this analysis, we ran the portfolio through our simulation model to forecast RBC and the distribution of RBC changes at a 1-year horizon. The simulation model takes into consideration the granular country (49) and industry (61) factors, correlation of instruments, and empirical migration probabilities to calculate this distribution. 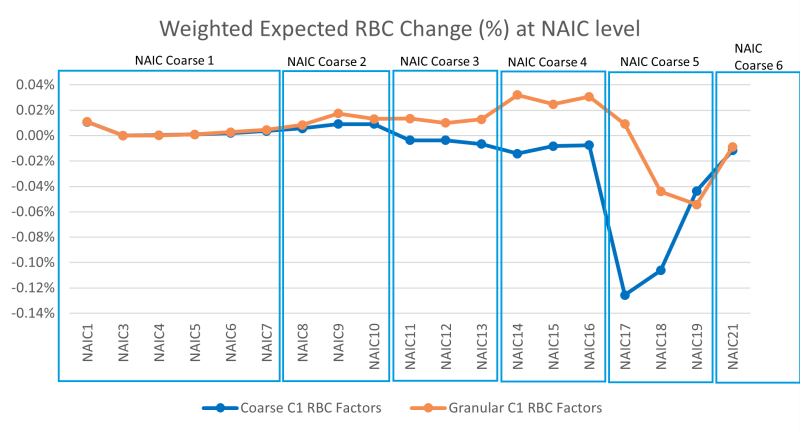 Figure 3 shows the weighted (by notional) expected RBC change under coarse and granular C1 RBC factors at the 1-year horizon. The overall RBC is expected to mildly increase (+0.084%) under the granular factors as compared to the expected RBC decrease (-0.289%) under the coarse factors. The figure shows that the expected decrease in RBC under coarse factors is driven entirely by lower-rated bonds, particularly NAIC17 and below. The empirical migration probabilities used with coarse and granular C1 RBC factors have been estimated under different time periods, with granular empirical migration probabilities estimated on data which includes more recent economic events (COVID-19). The behavior shown in Figure 3 is mostly due to the difference in C1 RBC factors as the empirical migration probabilities are similar on coarse level. 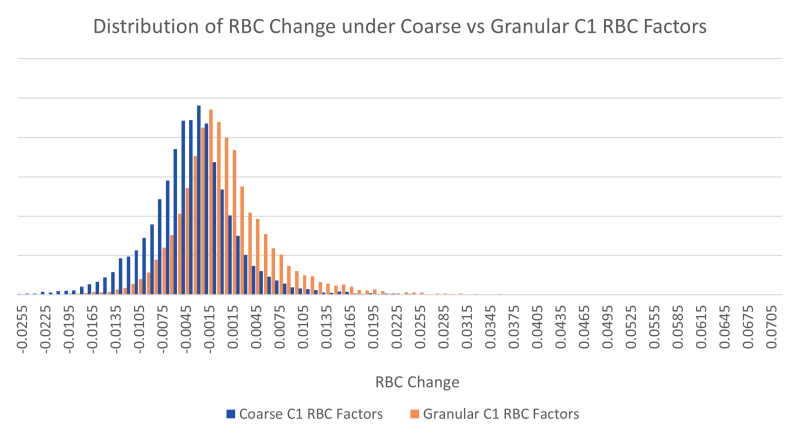 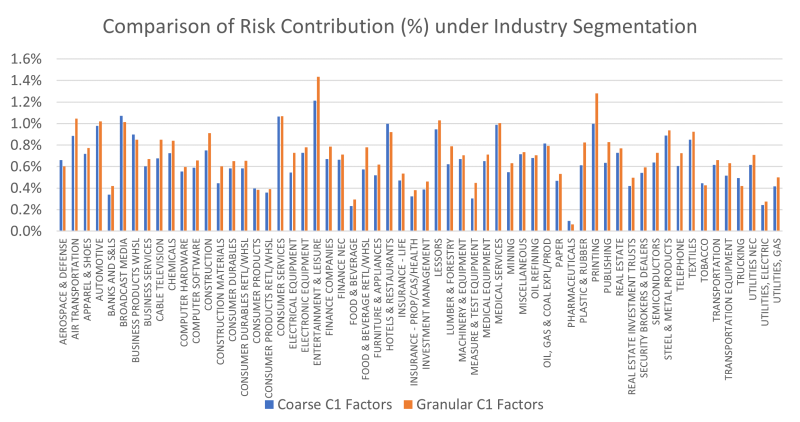 Finally, we can comment on the volatility in RBC. Under the granular capital factors, a bond undergoing a relatively small change in credit quality (for example, one notch) will always incur a different charge, whereas a bond would require a relatively large change in credit quality to incur a different charge under the coarse factors. This is offset somewhat by the larger change in factor charges when credit quality does change under the coarse factors. We see this in the volatility of RBC change distribution in this sample portfolio, which is 0.596% and 0.654% for coarse and granular C1 base factors, respectively. We suspect that many portfolios will see a modest increase in RBC volatility under the granular factors.

The C1 RBC factors for life insurers’ have been updated. The updates came into effect with the 2021 year-end RBC reporting. MA’s quantitative framework allows users to analyze the impact of these changes on portfolio RBC by factoring in the underlying portfolio dynamics. Our findings using a sample portfolio showed an increase in RBC charges and an increase in volatility under the new granular bond factors.