Given the history of stress testing, this article examines some of the underlying causes and lessons learned so far from the various exercises, and how that has led to our current situation.

Until the financial crisis of 2008, regulatory stress testing practices in financial institutions were mainly limited to banks following the Internal Rating-Based Approach for Capital Requirements for Credit Risk under Basel II, and as part of the 1995 Market Risk Amendment to the Basel Capital Requirements. Banks were required to stress test their internal rating models under different scenarios like economic downturns, market risk events, or liquidity conditions.

In its May 2009 publication on the implementation of stress testing principles, the Basel Committee on Banking Supervision (BCBS) described what went wrong with stress testing during the financial crisis. Following banks’ failure to provide a proper advanced warning regarding their risk exposures, the BCBS outlined how banks and local regulators should approach stress testing going forward. The BCBS listed several areas to address:

The BCBS publication led the Committee of European Banking Supervisors (CEBS) – which eventually became the European Banking Authority (EBA) – to establish a target date for the implementation of these principles. The principles were to be implemented at the local institution-level by mid-20101. They left room for interpretation by local supervisors.

In its document, the CEBS described 17 guidelines for banks to address these shortfalls. The document also included seven other guidelines dedicated to local regulators, aimed at providing transparency to banks in order to help them understand the reasoning behind the required modification to the stress testing approach. 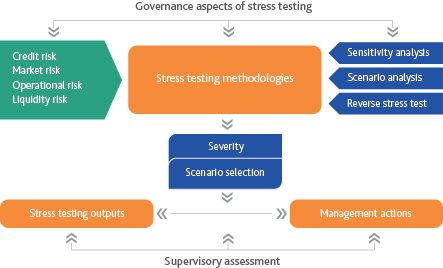 The US Supervisory Capital Assessment Programme (SCAP) in 2009 was the first of the major regulatory stress testing programmes required of banks after the 2008 financial crisis. The primary reasons for requiring this stress test were to restore confidence and calm in the financial system by bringing transparency to bank balance sheets in terms of the ‘true value’ of structured products.

The SCAP test architecture had two new key elements: it created a credible backstop for failing institutions and a new disclosure paradigm. As a result, it provided reassurance that the test was credible and was therefore well received by the market. Ultimately, it was successful in establishing a framework to evaluate systemic risk that was the model for future testing.

In 2011, the Federal Reserve System (the Fed) initiated for the biggest banks the Comprehensive Capital Analysis and Review (CCAR), which started the next generation of comprehensive regulatory stress tests. This exercise also involves macroeconomic scenario and capital planning.

CCAR is a forward-looking exercise that gives a detailed view on capital and risk for the coming two years. For each quarter, the profit and loss is determined under macroeconomic scenarios defined by the supervisors and the new balance sheet is rebuilt. Most importantly is the requirement that failing banks are not authorised to pay dividends nor execute shares buybacks. As such, CCAR is strictly adhered to by the banking industry.

Whilst the SCAP was underway in the US, European regulators began the task of defining their own set of stress testing parameters coordinated by CEBS. In 2009, CEBS started its first EU-wide stress test. The purpose of this stress test was to assess the EU banking industry in aggregate, leaving the individual bank assessment with each national supervisor. Initially, the results were to remain confidential. In the end, however, the aggregated results were published3.

The results were not perceived to be transparent enough for investors. Therefore in 2010, the CEBS launched a new ‘bottom-up’ stress test approach. The Capital Adequacy EU-wide stress testing campaigns covered up to 91 banks and represented 65% of the EU banking system or more than 50% of the overall banking assets from 27 member countries.

The aim was similar to what the successive stress tests campaigns did for the US market. The results seemed promising as the regulatory capital shortfall was only €3.4 billion. However, criticisms surfaced when the European Central Bank and IMF (International Monetary Fund) bailed out Irish banks in November 2010 – banks that had previously passed the stress test. Ultimately, this campaign failed because it was seen as not helping market participants understand real risk exposures within the macroeconomic context of Europe at that time. Critics also felt that it did not answer the basic question of what specific regulatory actions were needed in order to address banks’ weaknesses.

The 2011 EBA stress tests were even more transparent, providing market participants with a massive level of detailed information about banks’ exposures (more than 3000 data points). Once again, the results seemed accurate (a €2.5 billion shortfall on regulatory capital), but they were also discredited later that year. First, in August 2011, when the IMF’s head, Christine Lagarde, was quoted as saying that ‘EU banks need urgent recapitalization’ estimated at €200 billion. Doubts surfaced a second time in December 2011 when Dexia N.V./S.A, a Franco-Belgian bank that had successfully passed the test, collapsed.

In April 2012, the BCBS, as part of its mandate to assess the implementation of standards across countries and to foster the promotion of good supervisory practices, conducted a peer review of the supervisory authorities’ implementation of the principles. One finding of this peer review was that stress tests were being used for a wider range of purposes by supervisors and authorities, such as setting minimum capital requirements, determining explicit capital buffers, and limiting capital distributions by banks.

Furthermore, the stress test results were used (both with and without success) to restore financial stability by reducing opacity in a bank’s activities through disclosure, to calm markets, and inspire trust in the banking system of various jurisdictions.

During and following the publication of these 17 global stress testing guidelines, US and European regulators launched system-wide stress testing exercises to assess the potential capital shortfalls in case of a macroeconomic aggravation. Figure 2 illustrates the number of new regulations created following the financial crisis. 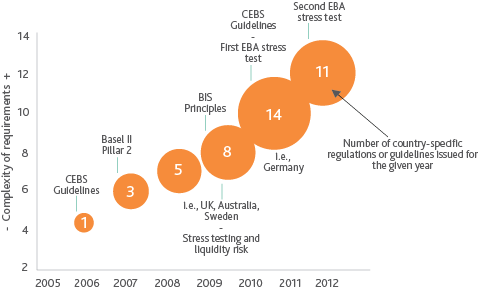 During interviews in the beginning of 2013, market participants stated that the amount of regulatory stress testing requirements could represent up to 80% of their resources involved in stress testing internally.

At the same time, they recognised that the new interest and visibility sparked by these system-wide exercises helped to improve the efficiency of the stress testing framework internally, as senior management could not avoid being involved and accountable. An example unearthed during these discussions was that a very large institution had previously discarded supervisory stress tests exercises as a mere ‘check-the-box constraint’ and suddenly and forcibly had to reconsider its entire risk framework following a bad stress test report from its local regulator.

A regulatory imposed stress test cannot replace individual stress tests that are tailor-made for the specific idiosyncratic risks of individual banks, which is why large banks have significantly reinforced their internal process and improved efficiency in their forward-looking approach.

Prior to the crisis, risk managers in charge of stress testing encountered resistance and difficulty pressing severe stresses into the process as senior management was not receptive. This has definitely changed.

With the tremendous increase in the number of regulations and guidelines between 2007 and 2011 and the growing complexity of implementation, banks were required to rapidly adapt their current approach to risk management and their existing level of compliance.

Banks dealt with the regulatory implementation complexity via a segmented approach, based on their size and the degree of intrusiveness by the local regulator pre- and post-crisis. As an example, large UK banks are probably the most advanced in Europe in terms of developing an integrated stress testing framework post-crisis. This includes a liquidity angle due to the size of the banking institutions and the extent of regulator involvement during this period.

Stress testing has become an integrated part of the risk appetite definition process for banks. It moved from a tactical, silo-based risk assessment tool used by business lines and risk managers, to a strategic input into the global business plan of a bank with full visibility from board and executive directors. Yet, due to the broad impact to many components of the organisational structure of a bank, this strategic transition cannot happen overnight.

Whilst the concept of a stress test is nothing new, it is clear from an analysis of the historical stress tests conducted from 2009-2012 that stress testing has adapted to the increased need for transparency. The evolution and application of stress testing resulted from lessons learned from each test. Test parameters have had significant implications on the overall success or failure of the tests, such as:

As banks continue to see changes in the regulatory landscape, further refinements to stress test requirements are expected.

In this Risk Perspectives podcast, Wilfrid Xoual discusses topics including why disclosures have worked in the US and not in Europe, the impact of the recommendation of the Enhanced Disclosure Task Force, and some of the lessons learned about stress test disclosures so far.

Learn how the next stress testing disclosures will play a critical role in Europe, including a comparison of the US and UK, what banks should disclose and when, and lessons learned.