This article provides a summary of the 2013 CCAR and Dodd-Frank Act Stress Tests, and compares the results with the 2012 stress tests.

On 7 March 2013, the US Federal Reserve System released the results of the 2013 Dodd-Frank Act Stress Test (DFAST). As expected, the overall result of the exercise reflects improvement in the capital strength of the industry, with an aggregate Tier 1 common equity of 11.1% versus a 10.1% level for the 2012 stress test results.

In the 2012 stress test results, four banks breached the 5% minimum Tier 1 common equity threshold whilst only one firm – Ally Financial – breached the minimum Tier 1 level in 2013. The post-stress capital levels also improved, with a 7.7% post-stress Tier 1 capital level compared to a 6.3% level in 2012 (see Table 1 below). Overall pre-provision net-revenue (PPNR) levels moved lower year-over-year, with a 2012 level of $294 billion versus a 2013 level of $268 billion. This lower level of earnings strength is attributed to lower market interest rates and narrower spreads, a reflection of the continued effort by the Federal Reserve to support broader economic growth through easing monetary policy. 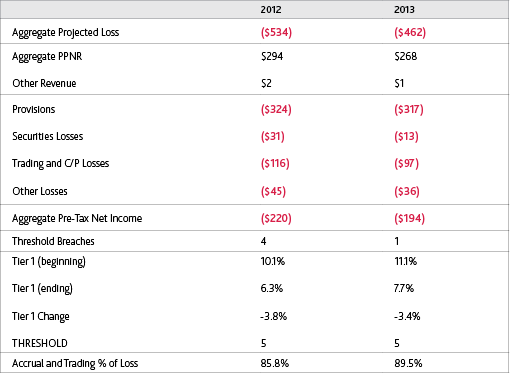 Regarding aggregate portfolio-level loan losses, the loss rate for 2013 is 7.5% versus an 8.1% level for 2012. The estimated ‘severely adverse loss’ for the 18 firms comprising the 2013 results was $462 billion, comprised of an estimated $211 billion in consumer loan losses, $97 billion in estimated trading and counterparty losses, $93.4 billion in C&I and CRE losses, and $61 billion in securities and other losses. Notably, over 89% of all losses are driven by the accrual loan portfolio (68%) and potential trading losses (21%).

Year-over-year, the loss estimates for most loan categories stayed flat or declined, with the notable exception of commercial real estate (CRE) loans. Losses on commercial and industrial (C&I) portfolios declined to 6.8% from 8.2% relative to 2012 results, but remained significantly higher than the historical experience of the banking industry. Though disclosure remained limited, it appeared that the Federal Reserve has adjusted its modelling approach from modelling groups of loans (by industry, credit quality and geography) to a transition path approach specific to given loan type. Within CRE, the loss rate increased from a 5% estimated level in 2012 to a 2013 level of 8%.

It is difficult to compare loss results due to modelling and economic scenario differences on a year-over-year basis, but the rise in expected CRE loss exposure may warrant increased focus for 2013 as US commercial property indices continue to rise and are close to pre-crisis levels. It is also interesting to note that there is a somewhat unintuitive measure coming out of this year’s stress test. For the 2013 stress test result, there is a dramatic decline in loss estimates for junior-lien loans and HELOCs. Even whilst first-lien mortgages showed a small increase (20 basis points) in the estimated portfolio loss rate (7.3% to 7.5%), the junior-lien/HELOC portfolio segment showed a full 3.6 percentage point improvement over the 2012 results, moving from 13.2% for 2012 to a much reduced 9.6% level for 2013. With a flat-to-slight increase in first-lien residential mortgage losses, it would be natural to assume a flat-to-higher level of loss for junior-lien portfolios and HELOCs. This unintuitive result may, like CRE above, encourage some additional analysis and review to determine the underlying rationale for the significant improvement.

Overall loan balances declined by approximately $99.2 billion year-over-year, with CRE, junior-lien consumer, and HELOC loans leading the decline. Of note, commercial and industrial lending increased at a brisk 8.9% rate even Whilst the loss estimate for this category improved from 8.2% to 6.8%. Given some of the recent market indicators that suggest an increased risk appetite and more aggressive pricing within this segment, evaluating stressed C&I exposure levels at a far more granular level may be prudent for banks experiencing significant growth in this loan category.

It is important to note that the 2012 and 2013 results are not entirely comparable, as both the macroeconomic scenarios and modelling methodologies used for the analysis have changed. This makes it difficult to assess the magnitude of overall improvement in the banks’ capital position.

It is also worth noting the disparities between the risk measures submitted by the large banks (for example JP Morgan, Goldman Sachs, and Morgan Stanley) and the Federal Reserve System’s (FRS) internal model estimates. For example, Goldman Sachs projected a Tier-1 capital ratio of 8.6% whereas the FRS estimate was 5.8%, under a sharp economic downturn. Similar differences in the magnitude of impact exist across a number of submissions, indicating material differences in modelling methods and loss and revenue estimates. These disparities highlight the importance of benchmarking results and using multiple, conceptually sound modelling approaches, and the need for model validation that is supported by robust default, recovery, and pre-provision revenue data and analytics.

On 14 March the Federal Reserve released the results of its Comprehensive Capital Analysis and Review (CCAR). The CCAR report assesses the quantitative and qualitative aspects of a firm’s capital planning and risk measurement processes.

For the 2013 CCAR review, two banks – Ally and BB&T – received objections to their capital plans. This means that the Federal Reserve must pre-approve any capital actions of these two institutions. For Ally the objection was based on both quantitative and qualitative criteria, whilst the objection to the BB&T capital plan was based, in part, on perceived weaknesses in the firm’s capital planning process, which includes, in part, erroneous reporting of risk-weighted assets due to the incorrect assessment of unfunded commitments.

Beyond the two capital plan objections, Goldman Sachs and JPMorgan Chase received conditional approval for their capital plans. This means that all capital actions can proceed as planned. However, certain process weaknesses require remediation by the end of the third quarter of 2013. Failure to properly address the identified weaknesses could risk possible Federal Reserve objection to the submitted capital plan for each institution. It is worthy to note that PPNR at broker banks is usually driven by the volatility of their trading portfolios (major source of earnings for these banks). This volatility increases during periods of stress; thus affecting the PPNR and their ability to build reserves and capital under those scenarios (versus retail banks with usually more resilient and less volatile earnings for PPNR projection purposes).

Concerns exist, given some of the noted differences in loss estimates across several asset classes, particularly around residential mortgage, C&I and CRE, various modelling assumptions, and methodology. It remains unclear whether the challenges derive from the Federal Reserve’s or the various banks’ modelling assumptions. At this stage, the quality and granularity of data is a big issue when calculating and projecting the PPNR components. This, in turn, may affect the capital projections and the capital plan.

Although one might infer from this that the Federal Reserve used an average LGD of 50% for C&I loans, it is not possible to make such an inference without presupposing that the Federal Reserve’s and Moody’s Analytics’ post-stress default probabilities were similar. However, what may be instructive is the observation that Stressed EDF measures based on the severely adverse scenario for many firms rise in a manner consistent with historical experience. When they rise by more than may appear warranted by the experience of the 2008 financial crisis, it is largely due to the fact that the obligor would enter the Federal Reserve’s hypothetical stress scenario from a higher level of credit risk than at the start of the 2008 recession.

Other interesting components of the 14 March 2013 capital plan review include:

In this paper, we first provide a background on stress-testing, discuss infrastructure challenges and issues related to legacy data and remediation requirements, including the costs and benefits of improved data management and the challenges of managing multiple hierarchies and reporting dimensions required by the Supervisory Authorities. Next, we cover data governance issues, the data requirements of meeting U.S. stress-testing mandates, and the basic elements of a sound data management infrastructure.

In this webinar, originally recorded on September 17, 2013, Thomas Day discusses best practices for expected loss and pre-provision net revenue forecasting, integration of stress testing into your business architecture, and transforming stress testing from a regulatory exercise to a strategic management tool.

This article provides a summary of the mid-cycle stress test results, including observations about scenarios, loss estimates and PPNR, disclosures, and areas for improvement.

Learn how the Comprehensive Capital Analysis and Review and Dodd-Frank Act Stress Tests will impact banks in 2014 and how banks can best prepare for the changes.

This article discusses two conceptual approaches for modeling stressed credit losses: top-down and bottom-up. It highlights the benefits and challenges of using each approach and regulatory expectations.

In an effort to improve transparency and increase confidence, global policy leaders have embarked on an ambitious agenda that has as its centerpiece improvements in data architecture and infrastructure, firmwide stress-testing, capital planning, and risk appetite frameworks. In the United States, this is known as the Comprehensive Capital Assessment and Review (CCAR). CCAR, Basel III, and enhanced liquidity risk management expectations aren't easy problems to solve. To