The AQR will set the foundation for a new global standard for stress testing that will be the immediate next step for the ECB.

Following the EU Parliament’s approval, the Single Supervisory Mechanism (SSM) will be introduced with the goal of strengthening the banking system. Many academics and practitioners agree that a single regulatory approach is a pre-condition of market stability, as capital will simply move to less regulated environments without it. Under the proposed scheme, the European Central Bank (ECB) will regulate 80% of all banking assets across the EU.

However, an asset quality review (AQR) of all the banks will need to be performed before the ECB assumes full regulatory responsibility in 2014 and before the stress testing of the 140 banks is carried out.

This requirement is driven by a few factors. First, there was a stark difference between the Supervisory Capital Assessment Programme (SCAP) test performed by the Fed in 2009 and what the Committee of European Banking Supervisors (CEBS) performed in 2010-11. The latter was initially perceived as insufficient on a number of fronts, such as disclosures of banks’ assets, scenarios performed, and capital required. New funding for the capital levels for the banking system was $75 billion in the US and $3.5 billion in the EU. The divergence was even greater considering that 19 of the banks were in the US, whilst there were 91 in the EU. The CEBS’s test looked even worse when Irish banks were forced to ask for a lifeline from the ECB to continue to operate within a few months after passing the test.

Next, to overcome its crisis of credibility and re-establish the trust of investors, Ireland had to set up a very granular AQR that had a degree of disclosure similar to what was realised with the SCAP.

Finally, the European Banking Authority (EBA) Stress Test performed in 2011 examined 90 banks and although the capital level required of the banks was not vastly different from the CEBS’s recommendations, the level of granularity and disclosure was much greater and similar to the SCAP-Irish AQR.

In contrast to the EBA’s stress test (which remains a top-down approach), the granular AQR, as anticipated by some senior officials, will be bottom-up. This will also reflect a substantial alignment with the more recent AQRs performed in Greece, Spain, Cyprus, and Portugal (see Table 2). The latter’s exercises scrutinised those portfolios that faced the greatest credit deterioration during the crisis: e.g., largely corporate commercial real estate, but also mortgages, consumer loans, and small and medium enterprises (SMEs).

The major key issue for the AQRs resides in the definition of performing and non-performing loans (NPLs). In the assessment conducted in Spain, the regulator defined three levels, which required provisions of 0%, 15% and 45%, respectively:

Experts concurred that the three-level granularity could, under stressed scenarios, lead to an excessive amount of migration from one level to another.

As there is no pan-European standard definition of an NPL, the EBA submitted a consultation paper in March 2013: Implementing technical standards on supervisory reporting on forbearance and non-performing exposures under article 95 of the draft Capital Requirements Regulation. The consultation ended on 24 June and the outcome will likely represent the first key regulatory tool to help the ECB guide banks during the AQR.

In the paper, the EBA sought consultation on two definitions and templates (see Figure 1, which is from the draft of the EBA’s paper) to define the notions of forbearance and non-performing exposures on one side, and to acquire and store the related data on the other. 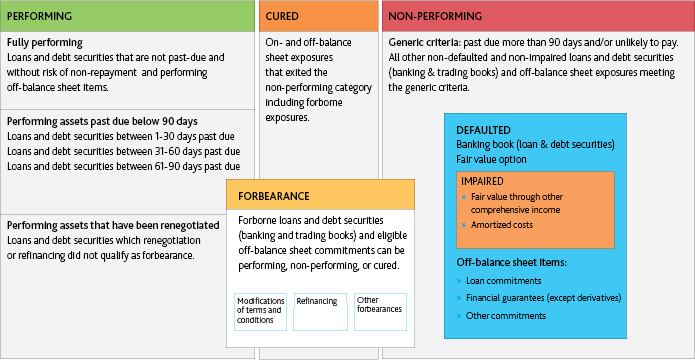 The latter will have a sizable impact in terms of implementation costs. For example, IT-database systems will have to be modified to adapt to the new definitions and to capture and monitor the data over time. Operations, internal procedures and reporting will also need to be adjusted in line with different levels of provisioning management and the impact on capitals levels.

The AQR and the drafting of definitions and templates will set the foundation for a new global standard for stress testing that will be the immediate next step for the ECB. These standards will also give the ECB’s supervisory role much greater credibility when the banking sector and investors need it most.

James leads the initiative to model the risk implications of climate change for corporates, SMEs, and sovereigns.

Together with Credit Data Research and CRIF, Moody’s Analytics has developed a solution to access, process, and utilise Open Banking data to construct real-time financial statements and up-to-date financial metrics.

This note presents the first tool that assesses borrowers’ credit risk using a scientific method that leverages both financial and behavioral information.

Is Stress Testing Worth the Investment?

Given the complexity and level of investment involved, risk practitioners have asked if stress testing is worth the effort. However, stress testing has become a key risk management tool.