In this article, we compare the bank and insurance industries, to not only highlight how they are being brought closer together, but also to gain a new perspective on stress testing practices.

Although the business models are fundamentally different, there are parallels between bankers and insurers when it comes to the challenges of stress testing. This article compares the two sectors, highlighting their differences and similarities to identify how they are being brought closer together and to gain a new perspective on stress testing practices. Furthermore, many banks in Europe actually own insurance companies so it will be interesting to watch how they address the discrepancies between the two.

Stress and scenario testing have been a longstanding practice in the insurance sector but recently their importance has grown significantly, driven by the introduction of regulations such as Solvency II, local regulatory requirements, and increased market awareness of the benefits of stress testing.

Senior management’s acceptance of stress testing as an internal risk management tool has further promoted the concept of stress testing to insurers. Similar to their bank counterparts, insurers face various ‘shocks’, some of which are correlated with the business and financial cycle. Stress testing is a valuable tool for regulators to ascertain whether insurers are financially flexible enough to absorb losses that could occur in various adverse real-world scenarios.

Despite the shared need to meet regulatory requirements, there are four key differences between the stress testing practices of insurers versus other financial institutions.

The key risk exposures of insurers include not only financial and operational risk, but also insurance risk (highlighted in orange in Figure 1). Although insurers primarily underwrite insurance risk, they are exposed to financial risks due to the interaction between their assets (premiums invested to cover liabilities) and liabilities1. The addition of insurance risk adds a layer of complexity when developing aggregated stress tests and consolidated reporting across the organisation.

It can be argued that insurance stress tests are structured in a similar manner to those prevalent in the banking world because many of the financial risks the two sectors face are broadly similar. However, to accommodate the additional risks, insurers are required to develop additional stress tests to effectively study the impact on their portfolio.

The liability profiles of different types of insurers place different requirements on the assets they hold. Property and casualty (P&C) insurers focus more on ensuring they have the liquidity to pay claims should those arise sooner than anticipated. Life insurers are more concerned with matching returns to their future obligations. Consequently, P&C insurers tend to adopt an investment strategy based on fixed income assets with few equity/growth assets. Life insurer investment focuses more on growth and hedging-type assets. This divergence is reflected in their varying stress testing approaches and the factors they emphasize.

Table 1 provides examples of unique life insurance stresses that do not typically apply to banks. Insurers take these stresses into account when implementing a stress test framework and designing scenarios.

Insurance is highly regulated and stress testing is a well-established practice. For example, in the UK the Individual Capital Assessment (ICA) regime has been around for many years. Today in Europe, there is the broader regulatory driver of Solvency II, as well as initiatives driven by local regulators, such as the Prudential Regulatory Authority (PRA) in the UK and the Federal Financial Supervisory Authority in Germany. The Own Risk Solvency Assessment (ORSA) requires insurers to stress their material risks and carry out scenario analysis to assess the robustness of their balance sheet both now and in the future.

Solvency II requires that an insurer’s balance sheet is stressed under the Standard Formula approach to assess the Solvency Capital Requirement (SCR). The European Insurance and Occupational Pensions Authority (EIOPA) prescribes details of the parameters of those shocks (examples in Table 2). 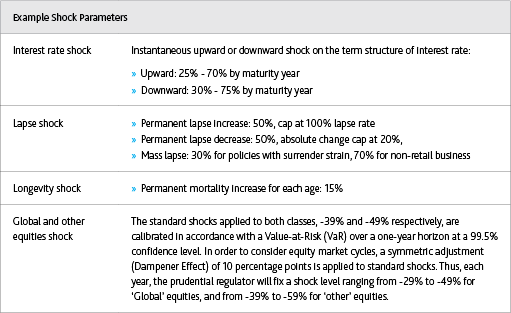 The ORSA is a set of processes designed to help insurers understand their own risks and support decision-making and strategic analysis. To effectively manage their risk, insurers must understand their risk profile and use stress testing and scenario analysis to assess the robustness of the balance sheet and capital calculation. Figure 2 highlights the ORSA process and stress testing, and scenario analysis is a major component.

The ORSA principles have been adopted beyond Europe – for example the National Association of Insurance Commissioners (NAIC) in the US is introducing ORSA, as has the FSB in South Africa. The Netherlands are currently undertaking an ORSA dry-run process. Thus ORSA is slowly moving toward universal acceptance in insurance. A key aspect of the ORSA is that it requires the projection of an insurer’s balance sheet over a multi-year time horizon based on a number of scenarios. Insurers typically adopt a small number (e.g., 6-7) of business planning scenarios for use in their ORSA. 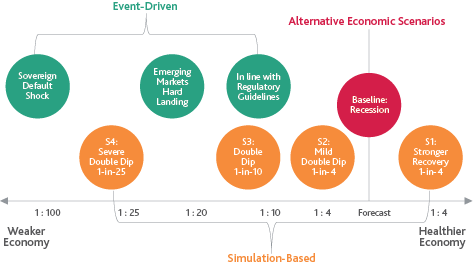 The major differences in stress testing between banks and insurers have previously been outlined, primarily relating to insurance risk and the different natures of the businesses. However, there are also similarities faced by the two sectors in the implementation of their stress testing exercises.

By entering the lending business, insurers are building similar portfolios to financial lending institutions. Many are increasingly looking into investing in alternative credit assets (such as infrastructure and corporate loans or CDS writing), which provide a better yield than long-term bonds and critically also match their long-term liabilities. Examples of insurers that are moving into the lending business which historically have been considered the domain of the banks, include AXA, L&G, and Ageas. Ageas established a US $1.3 billion corporate loan business in 2010 and AXA plans to lend €10 billion over the next five years. It is worth noting that insurers hold total assets of over $25 trillion and could become significant lenders in the coming years.

Interaction of assets and liabilities

The base stress test framework and governance will be broadly the same. This is highlighted in Figure 4, which could equally apply to either organisation. 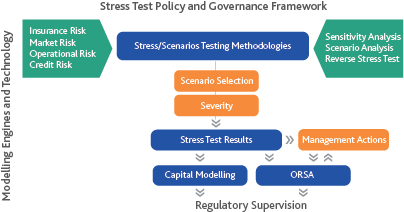 Many of the macroeconomic scenarios will be similar, as both insurers and banks operate in the same economic environments. Some of the calibrations may vary to reflect unique insurance needs, but the principles are common. Whilst Basel II/III sets out the regulatory requirements for stress testing in banks, the insurance equivalent, Solvency II, does have certain stresses unique to insurance that are broadly based on the Basel regime.

Is applying a bank stress test model to insurers overkill? As discussed, there are some similarities in stress testing between banks and insurers. However, it would be a mistake to apply banking requirement to insurers.

A good example of the differences between insurers and banks recently occurred in the US where the Federal Reserve Board was insisting on applying bank-like stress tests to MetLife, who they regarded as a systemically important financial institution (SIFI), along with several other large US insurers. The American Council of Life Insurers (ACLI) expressed concern about this approach, arguing that a bank model is too overbearing for an insurer. The ACLI said that insurance companies face risks that are in many instances unique to their business model.

This view was reinforced by John Nadel of Sterne Agee and Leach, Inc., New York, who recently said, ‘I don’t believe the Fed intends to force insurance companies into the bank stress test model and metrics without at least some adjustments to reflect some of the key differences in their business models (duration of liabilities, lower liquidity risk, etc.).

The consensus was that the stress test, as currently designed for banks, ‘is flawed when applied to non-bank institutions.’ The key points emphasised were:

Perhaps this is best summarised by the ACLI, who recently wrote to the Fed to argue that the Fed’s proposed rules do not appropriately distinguish between bank holding companies and nonbank financial companies that are designated as systemically important under section 113 of the Dodd-Frank Act (Non-bank Covered Companies). Additionally risk assessment should be tailored to life insurers, not hit with the same regulatory cudgel.

Whilst the above relates specifically to the US it is not inconceivable that other regulators may consider a similar approach.

One of the major challenges insurers face in stress and scenario testing is that the structure of multi-national/regional insurers means that stress testing has to be operational at both the group and subsidiary (‘solo’) level. The risks and considerations are very different for a small solo operation when compared to the group. For example, the solo will have to reflect local market factors and regulatory constraints. In essence, the group scenarios have to reflect the risks of the whole group, the interaction of those risks, and operate in multiple economic environments.

As an example of the complexities involved, one very large European multi-national has over 140 solos to consolidate at the group level.

Another factor is that often larger insurers will have grown by acquisition and thus have inherited a range of solos, each of which has its own actuarial modelling engines, technologies, and capabilities. Equally, local regulators each have their unique requirements on stress and scenario testing that almost certainly are different from the regulatory regime in which the group resides.

Perhaps the biggest challenge is in actually operating and monitoring a consistent stress testing process across a diverse group. This raises the key question of whether all stress testing should be undertaken by group based on data and inputs provided by the solo or, alternatively, solo stress testing is undertaken at the local level and effectively consolidated at group. There is no one answer to this question and approaches vary.

Stress testing in insurance has some parallels to banks but differs in a number of crucial ways. The main difference is that although insurers are exposed to financial risks, typically their largest exposure relates to insurance risks, which are less relevant for banks. Thus, insurers need to ensure that these insurance risks are covered as part of any stress and scenario testing.

Specifically, life insurance is a long-term business where contracts may have terms of 50 years or more. Thus, the time horizon of risks (e.g., long-term trends in mortality improvements) can be different from banks. Also, the interaction of assets and liabilities is very important for life insurers as part of any stress testing approach; whereas banks tend to focus on assets, particularly credit risk.

Regardless of these differences, stress and scenario testing is as important a tool for insurers as banks from both a regulatory and management perspective and should be an ongoing process built into the day-to-day operations of the insurer. Commenting on the volatility in the market to the Financial Times in August 2008, David Viniar, a Financial Officer of Goldman Sachs, said ‘We are seeing things that were 25-standard deviation moves, several days in a row.’

Stresses and scenarios should:

1 An insurer is fundamentally in the business of underwriting risks – typically it accepts risks from individuals (or entities) and pools them together to spread the risk. Basically, the insurer underwrites the risk in return for a premium (which it invests) and issues a policy to the policyholder, which is in essence its liability. The liability relates to the possibility that it may pay out a claim or cash sum at maturity.

Is Stress Testing Worth the Investment?
RESULTS 1 - 10 OF 19
Request More InformationMeet Our Experts