Both regulators and practitioners are progressively shifting their attention toward the role of deterministic scenarios in forecasting and stress testing. These scenarios are relevant in that they unveil threats to the economy as a system (in the case of the regulator) and to a business (in the case of practitioners). Developing these scenarios requires sensible macroeconomic models that, beyond capturing well-known relationships, are also able to incorporate a number of important elements, such as the right correlations across variables and feedback loops, the ability to capture how these change under stress, and the capacity to generate internally consistent paths for the variables.

In the context of models that are currently operational, a certain degree of accuracy can be achieved for only a limited number of macroeconomic variables. Therefore, the scenarios rely on two workhorse models used by most central banks and some governments for the modelling of a limited set of key variables (GDP, unemployment, monetary policy rates, interest rates, inflation, house prices, etc.), and that are more suitable for the analysis of short-term shocks. For a larger set of more granular variables (production indexes by sectors, sub-national level series, etc.), a large-scale econometric model is employed. The paths for the key variables from the two smaller models are input into the larger model to generate series for more than 200 variables.

One of the two pillar models belongs to the Dynamic Stochastic General Equilibrium (DSGE) family. These models incorporate rational optimisation by establishing how the various agents in the economy make decisions and react to shocks. This structure is taken from economic theory. Households are assumed to try to maximise their expected lifetime utility with a degree of risk aversion. In doing so, they consider their budget constraint where their savings and consumption are financed by their labour income, accumulated debt, and possibly returns to savings and government transfers. The production side of the economy is represented by firms deciding how much technology and capacity to use and how much labour to rent in order to maximise profits and return to their stock. Monetary and fiscal authorities will design monetary and fiscal policies aiming at maximising the welfare of the agents and at achieving the best possible allocation of resources.

Because the DSGE framework basically imposes a structure to the data, another class of models is also considered that, whilst still incorporating some economic theory to help identify the reaction to shocks, are much more data driven. They are known as Structural Vector AutoRegressive (SVAR) models and are basically a system of equations that approximates the relationships of a number of economic drivers with their lags, as well as the cross correlations of the variables amongst themselves.

SVARs model the endogenous economic variables as a function of their own lags and the lags of other variables so that they are free from the simultaneous equations bias. Both models are estimated with Bayesian and likelihood techniques. Proponents of the Real Business Cycle literature are among the main supporters of the DSGE models (Thomas Sargent, Nobel 2011, Edward Prescott, Nobel 2004, Robert Lucas Nobel 1995, etc.). On the other hand, SVARs belong to the econometrics arena pioneered by Christopher A. Sims (Nobel 2011) and others.

The third model is a large scale macroeconometric model, in the fashion of those designed by Lawrence Klein (Nobel 1980). This model looks at the aggregate supply-aggregate demand relationships. Whilst it may not fall in line with recent theoretical developments, it is highly useful, as it is capable of generating projections for a large number of variables. The final forecasts and alternative scenarios will be a weighted average of the forecasts from the different models.

Now that the models are in place, what scenarios are worth looking at and what shocks should be modelled? A pure brute force approach would be to just look at an extreme percentile of the distribution of simulations that could be run with the models. A more sensible approach is to think of a relevant narrative and then pin the simulation path that would correspond to that narrative. For example, consider a scenario based on a credit crunch, which would also feature the money market rate increasing to 6% in the second quarter of the scenario. In that case, it would make sense to retrieve the simulation presenting that level and timing of the money market rate.

It is important to note that because Moody’s Analytics models are internally consistent systems of equations, when a specific path for one variable is selected the corresponding path for all other variables would also be pinned down. This general equilibrium view of the world is in contrast with partial equilibrium frameworks that model some economic factors in isolation, disregarding how they might be impacted by the feedback loops from other drivers that could be involved in the scenario initially triggered by that economic factor.

The purpose of the test, whether for pure forecasting accuracy or stress testing, will bear important implications for the type of models that are considered when modelling financial variables. Some core financial variables are modelled within the macroeconomic systems to encapsulate the mutual influence between the macro side of the economy and the financial and banking sectors. All other market risk metrics are derived in satellite models that feed from the relevant outputs from the macro models that are taken as drivers. Examples of these satellite systems are models for implied volatilities (equity indexes, commodities, interest rates, exchange rates, etc.), corporate and sovereign CDS, interest rates swap curves, and credit migration matrices.

The equity indexes of different countries exhibit a considerable degree of co-movement. Such is also the case of the cross-section of maturities in an interest rate curve and other metrics. This feature makes a very favourable case for the use of techniques that reduce the dimension of the initial set of variables to a lower number of series (factors) that can still account for most of the behaviour of the original dataset. In particular, we use Principal Component Analysis (PCA) because it generates independent factors, which are very convenient for reverse stress testing (RST) as we will discuss later (for more information about Reverse Stress Testing in this magazine, please see the article: ‘Is Reverse Stress Testing a Game Changer?’). PCA ‘diagonalizes’ the correlation matrix of the dataset, thus extracting independent vectors (factors) that span the whole dataset. From these vectors, only the first few factors that span most of the data are taken.

Consider a stress testing exercise on the Interest Rate Swap curve. As part of performing a sensible stress testing exercise, the two important features of the data are modelled: the dynamics of the spread across maturities and the alignment of certain swap rate tenor points to their corresponding yield tenor points. From the panel dataset consisting of the spectrum of maturities over time, two main factors via PCA are extracted1. In turn, a model for these two factors as a function of the economic drivers in order to stress the curve is defined.

The first factor is referred to as the ‘Level’ of the curve, as it indicates an average level of the interest rates at any moment in time. The second factor is known as the ‘Slope’ of the curve since it reflects to some extent the differences between the long end and short end of the curve. The level is interpreted to represent the medium term inflation expectations and it appears to be related to the monetary policy rate (or the three-month money market rate2) and the ten-year government yield. The slope factor is seen as the reactions of the curve to short-term shocks or fluctuations in the economy and it is associated with the term premium (approximated by the difference between the ten-year government yield and the three-month yield or money market rate) and with fluctuations in GDP growth. 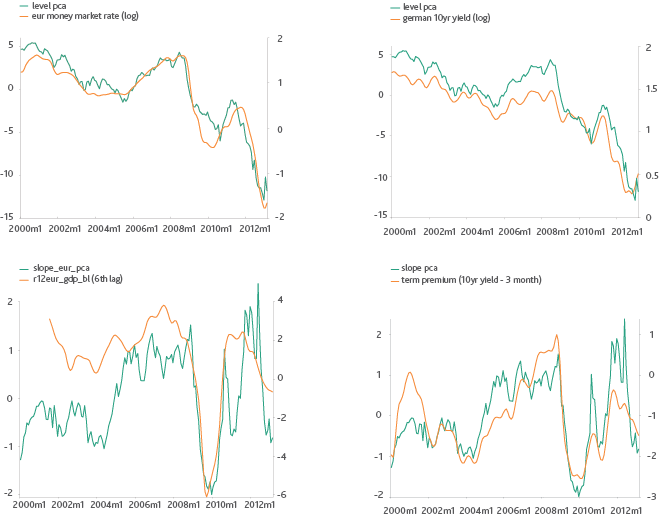 Developing deterministic scenarios in forecasting and stress testing to reveal threats to the economy requires three macroeconomic scenarios: one that incorporates economic theory, another with forecasts that are more data driven, and a third that generates projections for a larger set of more granular variables. When modelling the scenarios, a more sensible approach is to think of a relevant narrative and then pin the simulation path that would correspond to that narrative, rather than look at an extreme percentile of the distribution of simulations that could be run with the models. All together, they form a macroeconomic view on stress testing that will help to uncover system or enterprise-wide vulnerabilities and assist banks in making more informed business decisions.

1 For some years, models of the term structure have been working with three factors. Whilst the third factor may add extra accuracy, most recent models are already focusing on only two factors. After all, in most cases two factors account for over 98% of the behaviour of the dataset. For stress testing purposes, two factors seem to be sufficient.

Presentation slides from the Council of the Americas CFO Forum of 2020.

We use the UK Mortgage Portfolio Analyzer to assess the adverse economic impact from of the global pandemic on a representative portfolio of the UK mortgages.

COVID-19: Living Through the Stress Test of the U.K. Mortgage Market

We use the Moody's Analytics Mortgage Portfolio Analyzer to quantify the impact of this significant economic stress on a portfolio of U.K. mortgages.

In this article, we propose an innovative algorithm that is well suited to building dynamic models for credit and market risk metrics, consistent with regulatory requirements around stress testing, forecasting, and IFRS 9.

In this article, we discuss development of a framework that addresses the forward-looking and probability-weighted aspects of IFRS 9 impairment calculation using macroeconomic forecasts. In it, we address questions around the practical use of alternative scenarios and their probabilities.