With regulatory stress testing becoming more entrenched in general risk management, the need to understand the credit-specific drivers of regulatory risk weights has become an important function of risk management. This article aims to illustrate the general impact of credit deterioration on regulatory capital risk weights in a large dataset of multiple structured finance asset classes. For investors and risk managers, any asset class-specific trends can help in the investment evaluation process.

Criteria for the analysis portfolio

To understand the actual impact of credit deterioration on regulatory capital risk weights across the universe of structured finance securities, we chose a large cohort of comparable securities that would broadly illustrate trends and effectively represent the universe as a whole, based on the following:

As we expected, RMBS made up the largest segment analyzed (by number of securities and outstanding notional amount), owing to the large size of the non-agency RMBS market. Student loan ABS (SLABS) made up the smallest segment. 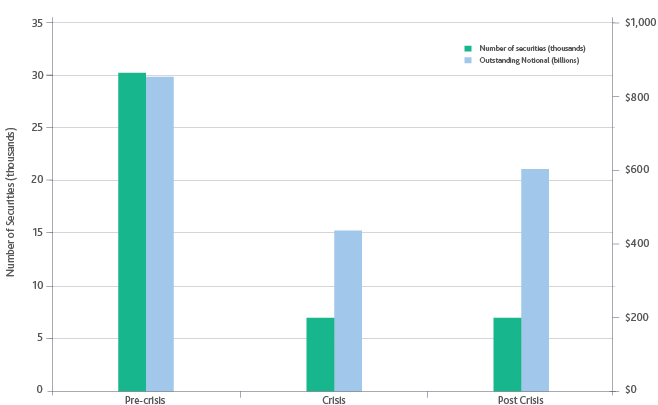 For the SSFA for regulatory capital, the W parameter represents the current delinquency and non-performing levels in a pool. As defined in the Federal Register,3 the W parameter comprises loans that are:

The SSFA formula requires normalization of a deal’s structure to its attachment and detachment points, as well as normalization of the credit risk profile to its W parameter. Hence, for two identically structured deals – i.e., two deals with similar attachment and detachment points – the current non-performing level represented by the W parameter is the primary driver of regulatory risk weight.

We stressed W instead of individual macroeconomic variables to exclude the dynamics of the different components of W to macroeconomic stresses, which allows for a comparable evaluation of the regulatory impact on an entire asset class, as opposed to deal-specific credit performance. For example, if we stressed only one macroeconomic variable, such as home prices, we would expect a sharp increase in the W parameter for an RMBS and HELOC security, but little change to a CLO security. There could be indirect effects to the macro-variable that drive corporate leveraged loan performance, but these effects would be minimal and likely delayed. Furthermore, such a macroeconomic shock would not affect all RMBS deals uniformly, because underlying credit quality differs. Stressing W directly illustrates the overall regulatory performance of an asset class.

For the analysis, we used average levels instead of medians. Although the median could be considered a good indicator of trends, the average better illustrates the broad trends of the stressed risk weights. Given that credit deterioration does not necessarily affect all securities similarly, using a median would not demonstrate the true effect of the shock. The effects of a stress on credit quality can differ, such that the median value will remain unchanged but the risk weights of many securities will rise significantly. By using an average, the value will move in accordance with the segment overall and better demonstrate trends.

One key observation is that the stresses do not affect all asset classes similarly; some can withstand such shocks across the rated structure better than others. This observation is in line with what we expected – that CLO and ABS securities have, on average, better credit protection

Figure 3 depicts the current average W levels for the entire analysis portfolio, along with the average attachment levels for Aaa- and Baa-rated securities. At a high level, it indicates current performance and credit enhancement for the asset classes. Specifically, the current average W level helps identify an expectation for credit deterioration shocks: changes to risk weight in the poorer performing asset classes should be greater than in the better performing asset classes. 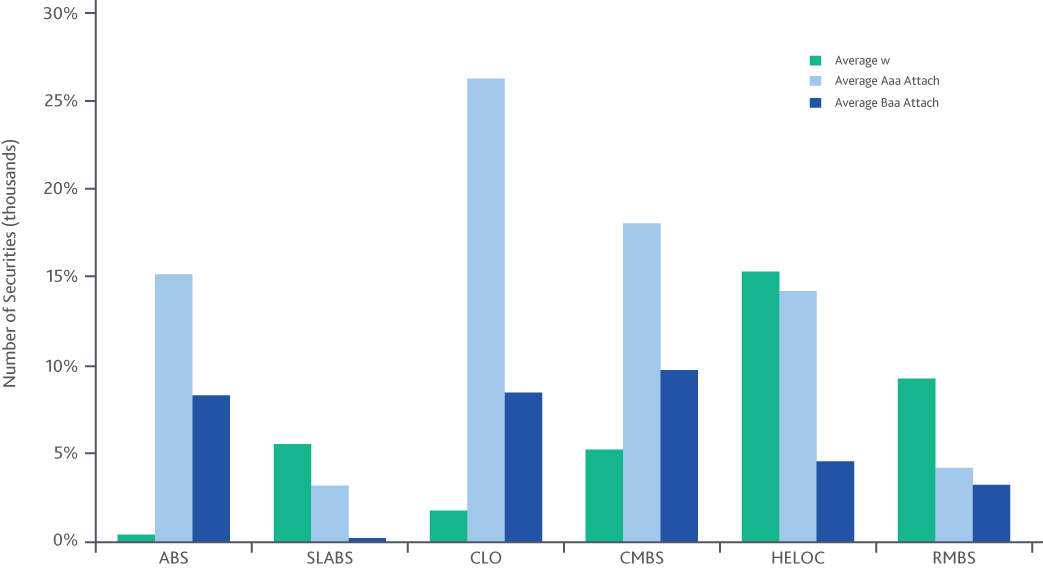 Given that the SSFA formula assumes a fixed severity for the W bucket (see the Appendix), an alternate way to use the data is to gauge a security’s ability to withstand credit shocks by how much higher a security attaches (average Aaa attachment and average Baa attachment) than by the average W bucket size (average W).

Such a back-of-the-envelope approach allows us to quickly determine that ABS and CLO are the only asset classes that have good credit protection at both the Aaa and Baa levels (Figure 3). These levels of credit protection are a function of how the transactions are structured and how their credit enhancement changes over time. Conversely, we can expect current HELOC and RMBS performance to be fairly poor because the average W levels are higher than the average Aaa attachment levels. 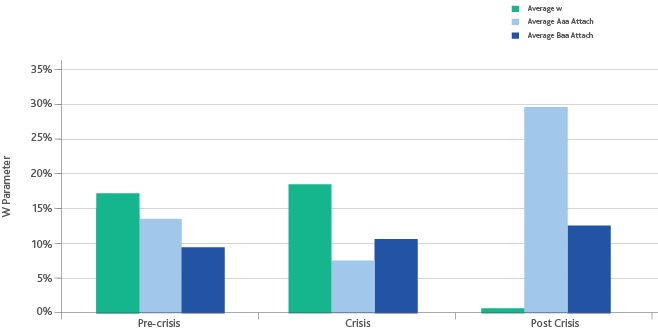 When reviewing the performance of an asset class as defined by the W parameter, breaking down the components of the level is also helpful. In Figure 5, the various components highlight the different makeup of the average W levels. This dispersion is the primary reason for the decision to shock credit quality uniformly rather than by independent macroeconomic variables.

To gauge potential credit deterioration, we analyzed the average risk weight by segmenting the portfolio by asset class and the original Moody’s Investors Service rating levels, which ranged from Aaa to B. We did not consider sub-ratings (1 to 3).

Figure 6 shows the average current risk weight by the segments used in the credit shock.

As expected, the SSFA-based risk weights are on average higher for lower rating levels. For SLABS, there were no securities originally rated Ba or B that met the selection criteria. Also, for the ABS buckets, very few securities were originally rated Ba and B and the average level skews to a low and high value. This would not be the case for one transaction – the B security will always have a higher risk weight compared to the Ba security in the same deal.

For this analysis, we ran three credit deterioration scenarios using values of 10%, 20%, and 50% to shock the current W level. For example, if a transaction had a current W level of 5%, we used values of 5.5%, 6%, and 7.5% for the three credit deterioration scenarios. Using a proportional approach ensures that the stress affects deals progressively – i.e., better performing deals are shocked by smaller stresses while worse performing deals are affected by larger stresses.

Figure 7 shows the results for the credit quality shocks. 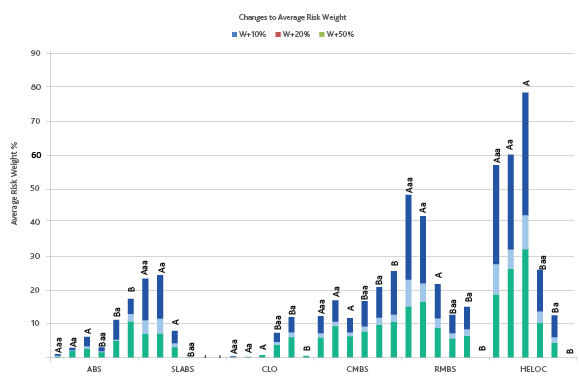 Although the effects of the credit deterioration stresses may appear to be minimal at the current W levels, we note some interesting trends. One key observation is that the stresses do not affect all asset classes similarly; some can withstand such shocks across the rated structure better than others. This observation is in line with what we expected – that CLO and ABS securities have, on average, better credit protection. The changes to risk weight owing to credit quality shocks, therefore, are minimal. Also, the performance of these securities in the scenarios aligns well with actual performance during the crisis.

There are a few different ways to interpret this analysis. From a regulatory perspective, the overarching theme is that credit deterioration affects different asset classes differently. This could be due to either the historical credit performance or the typical structure for an asset class or both. While risk management professionals can use different segmentations to analyze regulatory impact of portfolio changes, this analysis highlights high-level trends that should be considered at every step of the investment process.

The Simplified Supervisory Formula Approach requires a simpler calculation and data collection process. The trade-off for this is conservative assumptions on the losses of the underlying exposures, which could result in potentially higher regulatory capital requirements. The SSFA calculation requires the following input parameters: 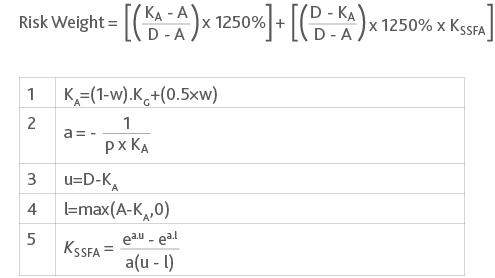 1 Although we excluded multi-tranche resecuritizations that would have required using a higher SSFA supervisory calibration parameter of p=1.5, we did include all single-tranche re-remics with p=0.5.

2 We analyzed the portfolio using the Regulatory Module in the Moody’s Analytics Structured Finance Portal.

A well-recognized researcher in the field; offers many years of experience in the real estate ﬁnance industry, and leads research efforts in expanding credit risk analytics to commercial real estate. 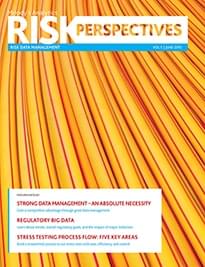 CLO Stress in the Time of COVID-19

Furthering our research on CLO collateral rating transitions, we now explore the implications of applying additional default forecast and stresses to the collateral of US and European BSL CLOs.

CLO Stress in the Time of COVID-19

COVID-19 Will Force the Office Sector to Evolve (Further)

How will COVID-19 reshape the dynamics of office space as an income-generating asset class? This analysis looks back at how the sector has evolved over the last four decades and speculate on the near- and long-term effects of COVID-19, as well as the degree of impact by industry and geography.

In this report, Moody's Analytics has updated the prior deal rankings of the non-terminated 2006–2016 CLO's by vintage using a variety of scoring factors. CLO's that have had at least two payment periods are included.

In this report, Moody's Analytics has updated the prior deal rankings of the non-terminated 2006–2015 CLO's by vintage using a variety of scoring factors.

In this report, Moody's Analytics has updated the prior deal rankings of the non-terminated 2005–2015 CLO's by vintage using a variety of scoring factors. 2015 US CLO's that have had at least twopayment periods are included.

This report shows the CLO Exposures for Linn Energy, Breitburn Energy, Exco Resources, and Penn Virginia. The holdings total only $23 million across 15 CLO and 6 CLO managers. Interestingly, most of the positions are bonds rather than loans.

This report shows the exposure across CLO's as of the latest available monthly surveillance report on May 9, 2016. Holdings total $652 million across all CLO's with 262 investments by 47 CLO managers in 233 CLO's. Highland has both the highest exposure by Manager and one of the highest maximum exposures by CLO.

In this report, Moody's Analytics has updated the prior deal rankings of the non-terminated 2005–2015 CLO's by vintage using a variety of scoring factors. 2015 US CLO's that have had at least twopayment periods are included.

Valeant continues to make headlines. This report show its exposure across CLO's as of the latest available monthly surveillance reports on March 29, 2015.