Today’s technology is progressing increasingly quickly. The trend of improving computing power at decreasing costs has permeated the financial services industry, leading to notable capabilities including cloud computing, big data, and machine learning. In this article, we explore Moore’s law and Joy’s law, two governing principles in technology and innovation, and examine the role of new and emerging technologies in the rapidly evolving financial technology space.

We are living in a time of accelerating innovation. It’s hard to believe that it was just 10 years ago that Apple introduced the iPhone. There are now estimated to be 3.9 billion smartphones in the world1 and more than 2 million apps available in the Apple and Android app stores which enable your smartphone to be a high-end camera, get real-time news updates, track your fitness, trade stocks, deposit checks, and yes, make phone calls if you really need to.2

Technology is a key and well-documented driver of this acceleration. Technology acceleration is most clearly stated by Moore’s law. First postulated by Intel cofounder Gordon Moore in 1965, Moore’s law is the observation that the speed and power of microchips would double roughly every year (which he later updated to every two years) for only slightly more money with each new generation. The pattern predicted by Moore’s law has generally held true for 50 years.

Moore’s law provides an explanation for the fact that the processor in your iPhone today has more computing power than the Cray-2 supercomputer used by NASA in 1985. It’s worth remembering that the Cray cost approximately $16 million in 1985 and needed to be physically connected to the water main to provide cooling.3

Cloud computing takes all of today’s storage capacity and computing power and effectively makes it available as a utility. If I want to use a server with 64 processors and 256 gigabytes of memory, I can visit an online cloud provider, explore a few options, put in my credit card details, and have a server up and running in 10 minutes. The cost for all of that computing power is just $3.45 per hour.5

Big data refers to datasets that are too large or complex for traditional data processing methods to handle. Big data technologies allow us to store and analyze these huge and ever-growing datasets. These datasets, in turn, are the perfect training datasets for machine learning algorithms to spot patterns that we did not know existed. It is this combination of big data technologies and machine learning that allows Facebook to suggest the names of our friends who appear in a photo taken on our smartphone, or Spotify to provide us with new music recommendations.

We have customers using big data technologies to store all of their risk management data alongside all of their customers’ website usage logs, because it may reveal something interesting over time.

Moore’s law is one relatively well-known factor driving this period of accelerating innovation. A second, lesser-known factor is Joy’s law.

Joy’s law, attributed to Sun Microsystems cofounder Bill Joy, is the principle that “no matter who you are, most of the smartest people work for someone else.” According to Joy, “It’s better to create an ecology that gets all of the world’s smartest people toiling in your garden for your goals. If you rely solely on your own employees, you’ll never solve all your customers’ needs.”

We are seeing Joy’s law manifest itself today in multiple ways across the financial services industry, such as in open source software, application program interfaces (APIs), consortiums, and partnerships.

The growth of big data has partially been driven by the processing and storage advances already mentioned, but it has equally been driven by Hadoop, one of the most successful open source projects of recent years. Hadoop is the software layer that allows us to store and process large quantities of data by distributing that data across multiple machines. Hadoop came into being after Google published a research paper in 2003 explaining how it managed the huge amounts of data needed for its search engine.6 The open source community set about implementing its own version of what Google described, ultimately creating Hadoop. Today, Hadoop continues to evolve and be developed by a team of volunteers from companies including Yahoo, Facebook, IBM, Microsoft, LinkedIn, Twitter, and many others.7

Of course, open source software is nothing new; the Linux operating system, first released in 1991, is the result of one of the earliest and most popular open source projects. However, in the last 10 years, we have seen an acceleration in the development of open source software in part through the establishment of GitHub. GitHub enables open source software developers to find each other’s work and collaborate on new projects. In April 2017, GitHub reported it was hosting nearly 57 million projects and had almost 20 million users.8

The financial services industry is starting to ramp up its contributions to open source with firms such as Goldman Sachs,9 Capital One,10 and Bloomberg11 leading the way as active contributors to projects on GitHub.

APIs are the second major way we are seeing Joy’s law manifesting itself today. APIs allow a piece of functionality to be exposed in a way that other users can access it. For example, I can get the latest weather forecast for my current location from a weather API, or the latest stock price for my company’s stock from a stock price API. An API encapsulates a company’s proprietary data and analytics, and the API provider can then govern how consumers use the API: Is it free or do they charge for use? Can the API be called a certain number of times per month at no charge? With access to the API, new products and services can be built.

We are currently seeing an explosion in APIs, with the ProgrammableWeb API directory listing more than 17,000 available APIs across multiple industries.12 The financial services industry is seeing a similar increase in available APIs. This is being driven in part by the Second Payment Services Directive (PSD2) regulation in Europe, which includes provisions that banks need to enable account access by third parties by public APIs. However, it seems like every week another bank announces an API initiative.

At Moody’s Analytics, we provide a lot of our products and services via APIs, whether it is to access a rating from our sister company, Moody’s Investors Service, or to provide a probability of default calculation on a private firm. We plan to continue expanding the APIs that we provide.

We have recently observed a growing interest in industry consortiums working together to tackle new and evolving issues. The most successful of these initiatives is R3, the consortium of more than 70 of the world’s biggest financial institutions which have come together to explore how blockchain technology can be used in financial services. The consortium only came into being in September 2015 with nine founding members; however, it has since grown rapidly to its current level of membership. So far, the consortium has worked together to complete multiple proofs of concept and has created an open source distributed ledger platform called Corda which has been designed for the financial services world.

The final approach to Joy’s law that we are observing is one of partnership, particularly partnerships between large, established industry players and innovative fintech startups. According to Financial Technology Partners, an investment bank with a fintech focus, financial technology companies raised $36 billion in financing across more than 1,500 funding deals in 2016.13 As an example, Kabbage, an online provider of small business loans, has partnered with both Scotiabank and Santander UK to bring its fintech platform to the banks’ customers.

Moody’s Analytics is currently partnering with Seattle-based fintech company Finagraph to develop the MARQTM portal and MARQ score, tools that enable banks to streamline the lending process by integrating data from customers’ accounting systems directly into the banks’ underwriting process. We are also partnering with San Francisco-based Spacequant to develop a new model in the commercial real estate space. We expect to continue developing these and other partnerships.

In summary, we believe that in an age of fast technology innovation governed by Moore’s law, the only way to solve all of our customers’ needs is to embrace Joy’s law and develop an open ecosystem of partners and collaborators who can help us achieve that goal.

7 The Apache Software Foundation. "Who We Are: Apache Hadoop Project Members." April 27, 2017.

12 ProgrammableWeb. “Search the Largest API Directory on the Web.” 2017.

Richard is the Director of the Quantitative Research Group at Moody's Analytics, responsible for numerous analytical productivity and data quality initiatives. He designs, implements, and operates systems that apply lean manufacturing principles to data production. Prior to Moody’s Analytics, he was a consultant with McKinsey. He has a PhD and an MS in aerospace engineering from Georgia Tech, and an SB in aeronautics and astronautics from MIT. 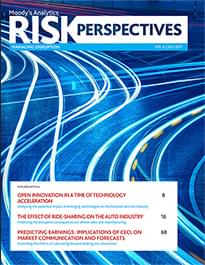 Examines the role of disruptive technologies in the financial sector and how firms can improve their practices to remain competitive.