This article discusses the Moody’s Analytics Banking Lab (MABL), which provides a virtual and immersive environment to explore the possibilities of a stress testing solution. More than a product test bed or demo, MABL is a view into the future of stress testing and helps our clients to storyboard, plan, and build flexible roadmaps for stress testing. It is a place to see what a transparent, auditable, and integrated stress testing solution looks like – one that can quickly conduct stress tests, with repeatability.

During the first CCAR exercises a few years ago, banks cobbled together largely manual processes and Excel-based data to run the tests they reviewed with the regulators. Slowly, firms began realizing that they needed to streamline and automate their stress testing processes to be effective. They also understood that integrating and bringing consistency between and across the risk, finance, and treasury operations business lines was critical.

To meet regulatory requirements, banks need to address the challenge of establishing real-time visibility, analysis, and reporting of enterprise-wide data. Most need to transform their existing IT infrastructure rather than simply reacting to regulations on a case-by-case basis.

However, building large-scale computer systems to automate complex tasks is still daunting. Integrating what can be disparate products and components into a seamless solution makes the problem even more difficult. For example, consider the design and construction of the Airbus A380.

The Airbus A380 is the largest commercial airliner ever built. It is an engineering marvel. Airbus was originally formed as an aerospace consortium by a number of European governments. True to the company’s heritage, the enormous A380 was designed and built in pieces at separate locations in different countries.

When it came time to assemble the first A380 prototype, the major components were brought together and engineers set about assembling the aircraft. They soon discovered a major problem – the sections built in the different locations didn’t fit. It turned out that the wiring harnesses to connect the sections were simply a few centimeters too short.

Ultimately, the problem was traced back to a single decision, which allowed the separate subsidiaries to use different versions of the Computer Aided Design (CAD) software to create the engineering wiring diagrams. Fixing the problem took almost two years and cost more than a billion dollars.

Today, technology products are often designed and built in pieces in different locations around the world. Moody’s Analytics is no different and has multiple development sites in a number of countries. Recognizing, however, that there is a small window of opportunity to develop an end-to-end stress testing solution that integrates and builds on a number of related products, Moody’s Analytics decided to develop the next generation of its stress testing suite at a single location.

Is MABL a physical thing or is it just a computer- simulated environment? The answer is both: there is an actual physical version of MABL with walls, desks, and computers in the Moody’s Analytics San Francisco office, but in essence MABL is a synthetic environment for stress testing. The physical MABL has workstations just like a real bank, and augments the virtual MABL bank by giving visitors additional sensory information, such as sound and touch, to create a lifelike experience.

The overall goal of MABL is to create an immersive environment to allow visitors to explore the possibilities of the stress testing suite. You can “walk” around MABL and “see” how the personas in the virtual bank interact with each other as they “work” on various activities in the stress testing domain.

MABL can help show clients what their future processes and stress testing system might look like. This testing environment can help them develop a roadmap, which could then be shared with the regulators to show how the bank would plan to improve their infrastructure and correct weaknesses in their current processes. It is a place to see how the system works, explore new ideas, and give feedback to help guide the direction of the stress testing solutions.

In practice, MABL will provide an environment to prototype new features and integrate new components of the stress testing suite, simulate data and workflow, do system testing, check component integration points, etc. It will provide a means to see how a bank would handle a situation, and confirm that it not only makes sense, but also that it all works together.

To simulate situations similar to what actually happens in a bank engaged in CCAR/ DFAST stress testing, MABL uses personas, or personifications of people. A persona is a composite representation of a user of the Moody’s Analytics stress testing suite. The purpose of personas is to humanize the end “users” of the system and help articulate their needs and goals, and the context of their system interaction.

As an example of how personas are used, consider the following scenario.

Ralph Johnson, from the Federal Reserve, was reviewing a bank’s stress testing submission and became concerned that the narrative that went with the numbers wasn’t clear.

The bank was planning a number of aggressive moves to build its business and improve profitability. Most of its business lines were doing well, except for its faltering oil and gas lending unit, which the bank planned to sell off in the coming year. 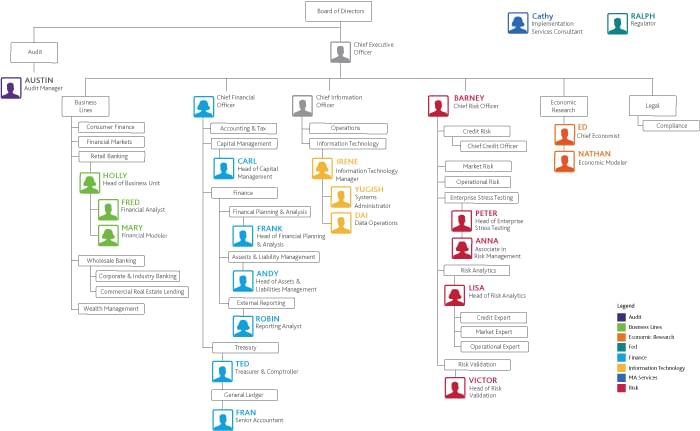 He knew it would be difficult to sell the oil and gas business in the recession-like conditions included in the severely adverse scenario the bank was asked to forecast. So he wondered if the bank excluded the planned sale as a result.

He called Lisa, the head of risk analytics at the bank and the primary contact for dealing with the regulatory examination team that includes Ralph. Lisa, after briefly talking with Ralph and unable to provide an answer about the exclusion or inclusion of the planned sale, called Holly, who runs the department that includes the oil and gas unit. She confirmed the bank planned to sell it and included the planned sale in its capital plan. She wasn’t sure, however, if the stress testing results included the sale for the severely adverse scenario, and would speak with Peter, the manager of enterprise stress testing.

The bank’s stress testing team is big and becomes much bigger during stress testing season. Peter thinks the process the bank uses is too complicated and takes too much time. He also knows the process lacks the transparency needed to answer questions like the one Ralph is now asking.

Peter then talks to Anna, an associate on his team, and the person most familiar with the details of what went into the stress tests. Anna explains there is no easy way to look back into their stress test and determine whether or not their loss estimates included the planned business sale. They talk to many people on the team and work for several days to pull together an answer for Ralph.

Lisa finally gets back to Ralph and explains that he was right, namely that the bank would probably not be able to sell the oil and gas unit if they were faced with a situation like the severely adverse scenario, and admits that the bank excluded the sale in the run they submitted to the regulators. Worse yet, the bank is not in a position to easily redo the scenario and resubmit their results.

In the end, Ralph’s team completed their review of the bank’s submission and sent their response letter to the bank. The letter included what is known as a Matter Requiring Attention (MRA), which required the bank to correct the issues that resulted in the bank’s failure to answer questions about its stress test submission.

This is a serious issue for the bank, because it raises the possibility that the regulators may impose penalties or restrictions on them, and will force the bank to spend time and money to address the situation.

Peter’s inbox is soon flooded with messages about the letter. This only confirmed his concerns that the bank should do something to improve its infrastructure and more easily handle similar situations. He decides the bank’s stress testing process needs to be transparent and auditable, as well as run much faster and with repeatability.

Another equally important element of a stress testing simulation is data. The virtual bank in MABL contains a rich dataset with information across a variety of asset classes, detailed to the lowest level of granularity, to mimic the portfolio of an actual CCAR or DFAST-class bank.

In MABL, the personas interact, use the data, follow a process, and run the system to simulate an end-to-end stress test just like a real bank. It simulates many situations, like the one outlined in the example scenario, and translates the story dialog into a workflow that can be followed though a stress testing solution.

The workflow would first research the question (e.g., if the stress testing results submitted to a regulator included a faltering business sale in the severely adverse scenario), and then orchestrate the work to run the analysis and generate the results.

Finally, the simulation includes the domain model (See Figure 3). All the steps a bank must take to conduct a regulatory stress test from end to end are outlined in a domain model, including the month when each step takes place and the major tasks associated with a step. For example, in Step 11, “Generate Submission,” the tasks are to generate reports, analyze and audit FRY-14 report, reconcile reports with other sources of data, and determine the capital plan. In addition, this model notes the task intensity and banking division responsible for the task.

MABL is more than a product test bed or demo. It is a view into the future of stress testing. It is a simulated environment for our clients to storyboard, plan, and build flexible roadmaps for stress testing. By creating a stress testing environment, MABL runs across banking functions and overrides the typical banking silos.

It is a place to see what a transparent, auditable, and integrated stress testing solution looks like – one that can quickly conduct stress tests, with repeatability. It can also get institutions on a glide path that will help manage their business and satisfy regulators.

Most banks are able to stand up to quantitative stress testing and even prove their capital adequacy. But many organizations lack a streamlined process that allows them to run stress tests with ease and control. This article outlines a five-step process that will help banks maximize their stress testing investment.

Reducing the Stress in Stress Testing

Moody’s Analytics surveyed our banking clients to help better understand how they currently use information technology to improve the efficiency of their stress testing processes. In this article, we present our key findings regarding the current best practices to be more efficient in the future.

Stress Testing in the US: What Happens Next?

This article provides an update on the future of the regulatory stress tests and their industry impact, and how banks can best address the challenges to create an optimal program that generates business value.