This article explores the new and upcoming challenges in reporting, driven by regulatory and business needs. Institutions need to rethink their reporting infrastructures and move to an integrated approach, breaking the internal silos between risk and finance.

As an answer to the financial crisis, new regulations were introduced to make sure financial institutions hold sufficient capital and properly manage their funding needs in case another crisis occurs.

This impetus led to the international Basel III reform, which was complemented by country-specific initiatives, such as the Dodd-Frank Act Stress Test (DFAST) in the US and the Capital Requirement Directive (CRD) IV or European Market Infrastructure Regulation (EMIR) regulations in Europe.

1. The number of reports to be produced is increasing. As an example of the scale and scope of the increasing number of reports banks need to produce, the CRD IV COREP and FINREP reporting frameworks in Europe require more than 115 reports, corresponding to more than 35,000 data points. Moreover, financial groups need to produce these reports not only at a consolidated level, but also at solo levels.

2. The reports are becoming significantly more granular. An additional complexity is that, on top of the increase in regulatory reporting, the regulators are also asking for much more detailed reports.

3. There is a greater focus on the consistency and reconciliation of reports. Accurate and consistent data management is at the core of integrated regulatory reporting. For many banks, the greatest challenge in developing a regulatory reporting infrastructure is with understanding how to integrate a broad array of datasets into a single coherent dataset, in a central repository. The dataset must include fully harmonized transaction-level risk and finance data so it can deliver fully reconciled reports. 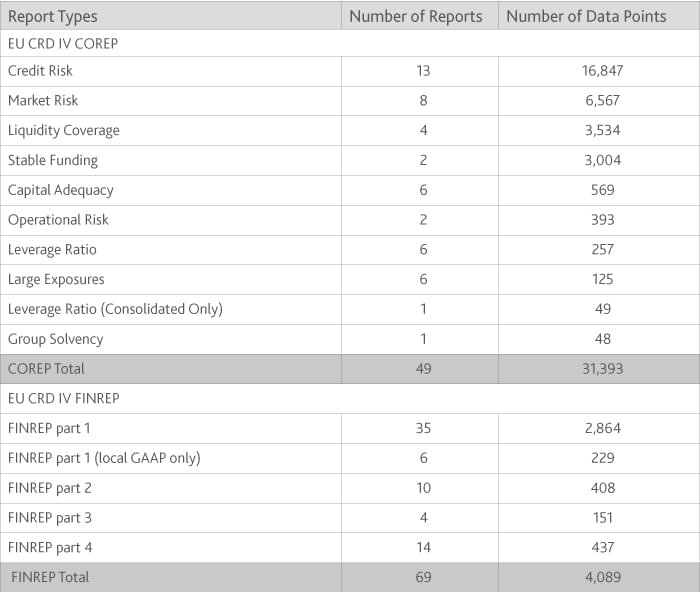 4. The frequency of reporting is rising. The scale and scope of many regulatory reports mean that manual or even semi-automated calculations that banks might have used in the past are no longer feasible. Highly automated processes that leverage built-in calculation formulas should be used as widely as possible to meet the demands of accurate, consistent, auditable, and timely results.

5. The format, data points, and metrics of reports need to be standardized. Various regulatory efforts are underway to standardize reporting across institutions and across different regulatory jurisdictions.

8. New technology standards are being introduced. In addition to the content of reports, institutions will need to upgrade their technology to meet new requirements.

10. There has been an increase of ad hoc one-time reporting requests. The increase in supervisory interaction also increases the need for financial institutions to respond to ad hoc requests by regulators.

To cope with these challenges, institutions need to rethink their reporting infrastructures. This current environment has created an opportunity to move to an integrated approach, breaking the internal silos between risk and finance. It will change the role of the regulatory reporting function from an “after-the-fact” compliance mandate to the strategic mission of providing the real-time detailed risk analytics required by business departments to make accurate decisions and properly price risk.

The paradigm is also changing. It is not sufficient anymore to aggregate current portfolio data and to compare these metrics with historical time-series. The information reported must be much more forward looking and include forecast metrics according to various stress testing scenarios. Similar to the way the scenarios that simulate a future financial crisis cannot necessarily be derived from past observations, the metrics and dimensions that are combined to produce meaningful reports may change over time and are scenario-dependent.

To comply with both regulators and internal stakeholders, as well as keep up with evolving reporting demands, a bank’s reporting infrastructure will need to be flexible and rely on granular data sources. It is certainly not possible anymore to create a new silo project and build a new database to cope with any new reporting requirements. An organization cannot produce timely and accurate reports if, at each reporting date, they spend all their effort and time reconciling multiple reports from various siloed systems. The system would rapidly become obsolete as it could not handle the latest data points or the level of granularity required.

The primary regulatory reporting project objective should be on data, and not be driven by reports. The focus should be on building a centralized risk data warehouse with granular transaction-level and counterparty information. The transaction-level records that capture all the detailed characteristics of banks’ asset, liabilities, and off-balance sheet exposures will automatically be reconciled with financial accounting statements. Workflow processes will be implemented to easily perform, validate, and monitor the required adjustments. The risk metrics computed by the various risk engines will then, as much as possible, be back-allocated at a transaction-level, creating a “golden source” of information for all types of reports and allowing banks to better allocate regulatory capital and funding costs per business lines down to trading desks. At origination, pre-deal checking should enable banks to assess additional risk profiles and regulatory costs generated by new trades in real-time, allowing them to match the metrics with their internal limits and accurately price for it.

When producing a forecast on the dynamic views of the balance sheet, it should be possible to easily increase the granularity of the results and to explore the reported data points to cope with different reporting needs. Producing a new regulatory report with more granular or updated dimensions is then just a matter of properly querying and aggregating already available data. Of course, the volume of information required in a centralized risk data warehouse may be significant, but banks can leverage new in- memory technologies to process and aggregate millions of records in real-time. Such advanced technologies also allow firms to easily drill down into aggregated reports or management monitoring dashboards and breakdown the reported figures per counterparty – by general ledger account level or transactions. This information allows banks to fully understand the origins of the risks taken and to easily monitor changes from one reporting date to another.

Regulators have evolved from asking for pre-formatted aggregated reports to granular transactions or counterparty data (e.g., US CCAR transaction level reports or UK FDSF quarterly reports). They want to be able to re-process such data points with their own models to challenge and benchmark the internal models of banks. Standardization efforts are underway to normalize such data points (e.g., LEI, trade repository, XBRL). Trends in “Big Data” technologies and practices will certainly facilitate the change toward accessible and granular data that regulators and internal stakeholders of financial institutions need to easily “query on demand” so they may perform near real-time analysis. A country data consortium may be created to capture and centralize these datasets for regulators and other type of analysts. This would lead to an increase in the transparency of the financial system and much better tools to detect systemic risk and new financial bubbles.

With integrated regulatory reporting, financial institutions will progressively move from report-centric silos to a data-driven and holistic infrastructure, from pre-formatted reports to “Big Data” technology standards that allow ad hoc and individualized risk analysis. The easier it is for analysts to perform their own ad hoc assessment of financial risk instead of relying on the same “one-size-fits-all” aggregated reports, the safer the financial system will certainly be.

The Basel Committee on Banking Supervision (BCBS) published its second consultation on the capital measurement for operational risk in March 2016. This whitepaper gives a thorough overview of the BCBS's consultation and the quantitative impact study (QIS) on the proposals set out in this consultation. The results of this study and comments received are expected to be used as inputs to the final design and calibration of the operational risk framework.

The Basel Committee on Banking Supervision issued the final Basel III securitization framework in July 2016, incorporating the alternative capital treatment for simple, transparent, and comparable (STC) securitizations. This framework comes into effect in January 2018. This paper reviews the prescribed hierarchy of approaches, and looks at the potential overall impact of the framework on banks.

In December 2013, the Basel Committee on Banking Supervision released the final policy framework for the capital treatment of banks' equity investments in funds that are held in the banking book. The final policy framework will apply to investments in all types of funds and to all banks, irrespective of whether the banks apply the Basel framework's standardized approach or an internal ratings-based (IRB) approach for credit risk. The final framework will be applicable as of January 1, 2017.

The Basel Committee on Banking Supervision (BCBS) released the final policy framework for the measurement and control of large exposures1 in April 2014. The final framework takes into account the industry comments on the March 2013 proposal2 and would replace the Committee's 1991 guidance.

Learn from the experts how to untangle the many regulatory reporting challenges presented by today's Basel III, DFAST, and CCAR requirements.

This paper provides an overview of the COREP and FINREP reporting requirements, together with the challenges they present to bank management. It also proposes a framework, leveraging a centralized data platform, that helps banks to deliver integrated, consistent COREP and FINREP reports to their supervisors, on time and cost effectively.