This article describes the three principles that need to be understood and analyzed for banks to have a realistic chance of integrating alternative scenario work into their stress testing workflow.

The first principle refers to the ability to define and understand the shape and nature of any given scenario. It relates to practical questions, such as: What is driving the shocks in a given scenario? Which provided assumptions need translation into a portfolio? How are we going to manage the mapping/translation of the assumptions into all remaining macroeconomic and financial series?

The second principle relates to the cross-consistency of the forecasts, answering queries such as: How can we ensure that the shapes of all economic time series are in line with each other? What happens if it is difficult to reconcile the dynamics of a given variable with others that are being calculated in our models? Achieving a consistent set of economic parameters is not a trivial task and can pose formidable challenges to existing models and systems.

The third principle refers to the severity (or probability) of any given scenario. Many stress testing frameworks are centered on probability thresholds that need to be measured at a certain point in a distribution. Systems should be able to rank-order scenarios and potentially compute likelihoods of alternative scenario forecasts. The comparison of a specific scenario against the 2009-2010 crisis is a recurring practical request. Stress testing frameworks should be able to handle such queries.

These three principles illustrate the features necessary to develop an integrated stress testing system, but should not be seen as “sufficient” conditions that automatically guarantee integration.

The first important building block for a scenario-driven stress test is the ability to characterize or define a scenario. In practice, this translates into a combination of (i) qualitative guidelines for the scenario’s shape (the so-called “narratives”) and (ii) quantitative projections of specific macroeconomic and financial series (the so-called “assumptions” or “known shocks”). The extent of provided assumptions varies widely – from just a handful of key economic factors to a fairly comprehensive list of financial and macroeconomic drivers. The practical challenge for the modeler is to map (i.e., translate) the given assumptions into a larger set of economic and financial variables that will be used at a later stage in the stress testing process.

This critical starting point can be achieved by splitting the task into two steps:

The next two sections describe these steps with the help of some mathematics. The underlying logic is simple. The process starts with a set of assumptions, captured in a vector x. The next step consists of translating these shocks into a group of “core” macroeconomic and financial series, collected in the vector y. With the information from the pair (x,y) we populate values for a long list of parameters, grouped into what we refer to as the vector of satellite models: z=(z1,z2,…,zS). The final output of the scenario phase gets summarized in the triplet (x,y,z), This combined vector is the starting point for the modeling of credit, market, liquidity, and operational risk parameters.

The stress testing program starts with a set of assumptions, grouped in a vector of exogenous variables x∈RN. A typical economic model will contain relationships between:

The target variables to calculate are those contained in the vector of endogenous variables y∈RM. These targets are related to the assumptions embedded in x through a generic system of equations. We represent this system as the mapping F:RN x RT x RM→RM so that F(x,ε,y)=0. With a fixed value for the vector of assumptions x, the modeler will obtain projections for the remaining economic variables and potential paths for the residuals grouped in ε. The analyst faces a risk of multiplicity; i.e., having several solutions for (ε,y) that are consistent with the vector x.

Time-series models are a good example of standard core macro models. These equations contain lags of the endogenous variables together with (x,ε) as right-hand-side drivers of the model:

This system highlights the key challenge for solving core models: the set of variables xt still appears on the left-hand-side of the equation. In other words, the system defines the relationship between x and y implicitly – through a generic implicit function F(x,ε,y)=0 – and not necessarily by following an explicit functional form, such as y=f(x,ε). Solving implicit functions can require the modelers to work around local solutions and run simulations to understand the shape of the vectors (ε,y) around a given value of x. The problem of multiplicity present in this phase is very hard – perhaps impossible – to overcome in practice.

The completion of phase (A.1) provides the modeler with a full set of macro projections for all core economic series, grouped in the pair (x,y). These vectors will be used as drivers on several satellite models, as described in section (A.2).

Having completed the calculation of all core macro series, a natural next step is to run satellite models to expand the forecasts to a larger set of economic and financial variables. Some market risk portfolios, for example, will require hundreds if not thousands of “parameter estimates” to carry on with the stress test. From a mathematical viewpoint, the key distinction between these satellite equations and the core model is that satellite variables are typically derived directly and explicitly from assumptions of the core variables. 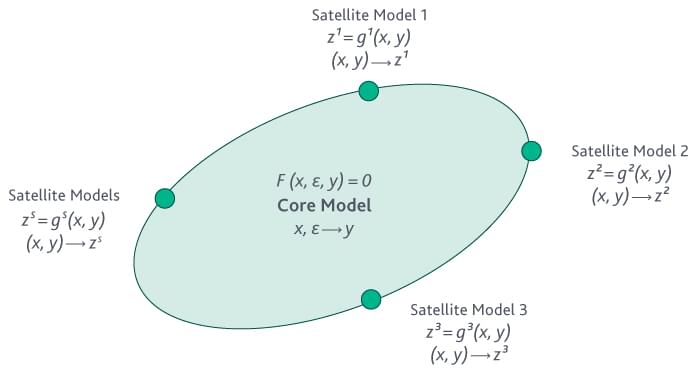 In formal terms, consider a group of S satellite models, labeled s∈{1,2,3,…,S}. Each of these equations is such that the endogenous variables, zs∈RPs, can be obtained as an explicit mapping of the core economic variables: zs=gs (x,y). In other words, there are no feedback effects between satellite variables, zs, and core macro series, (x,y).

To illustrate the concept of satellite models, the previous time-series example was extended to the behavior of zst, with lags of (x,y,z) and a residual term, μst, as potential explanatory variables:

With zst as the only variable on the left-hand-side of the equation, the relationship is unidirectional: from (x,y) to z. This simple time-series satellite model allows for no interactions with other satellite variables nor any feedback between zst and the economic assumptions in (x,y).

The final output of these two phases can be summarized in the triplet (x,y,z)=(x,y,z1,z2,…,zS)=(x,y,g1 (x,y),g2 (x,y),…,gS (x,y)). These elements represent the starting point of the stress testing process that is needed to carry on with the subsequent modeling and analytical steps (such as the calibration of market and credit risk parameters to the scenario assumptions, mapping of scenario parameters to liquidity metrics and balance sheet items, etc.). Properly defining a scenario is paramount, as it serves as a necessary building block for an integrated stress testing framework.

A critical challenge for implementing specific scenarios into a stress testing process is ensuring the overall consistency of the economic variables that characterize any given scenario. The severity of the shocks, timing of the recession, speed of the recovery and other dimensions need to match across all variables to obtain a consistent scenario. The practical challenge – translated into our mathematical set-up – amounts to “solving” the system F(x,ε,y)=0, having started with the assumptions imposed on the vector x. But what if these assumptions contradict the expected shape or behavior that have been predicted in the macro models? The error term (or random variable) ε serves as a residual term to try to “close the gap” between the values of y and x. In practice, if it is hard to make sense of the relationship between elements of y and x (i.e., if the error term is very significant), modelers tend to isolate those “problematic” variables and build specific satellite equations for them. Under such circumstances, some of the relationships described in F(x,ε,y)=0 are no longer valid and they are modeled through satellite equations.

The math can be summarized as follows: (a) a subset of endogenous variables (the so-called “problematic” series), say y̅;, gets mapped through satellite models: y̅=gs̅(x); (b) The remaining ones, say y̿, are solved through the conditional sub-system:

The ability to identify, document, and fix scenario inconsistencies is crucial to the stress testing scenario-building process. Underestimating this challenge can lead to an inordinate amount of workload for the analysts who are responsible for subsequent phases of the stress testing process. Making sense of the stressed numbers will be nearly impossible if the starting assumptions carry tangible inconsistencies.

Many stress testing frameworks are built around specific probabilities/severities of the initial shocks/scenarios. To this end, how can banks compute the probability of a given macroeconomic scenario? The multidimensional nature of macro forecasts makes the assignment of a single probability not a trivial exercise. Not only do banks face several variables within a scenario, but they also observe them over subsequent points in time. The analyst must produce a mapping of this multi-variate object into a probability, a number between 0 and 1. In mathematical terms, the task is to translate the values of the vector (x,y,z) into p=P(x,y,z)∈[0,1].

In practice, this is typically handled through simulation exercises. The steps involved in the process are as follows:

1. (C.1) Simulating the core macroeconomic model: Use the core macroeconomic model to simulate paths for the variables (x,y). Simulations are typically based on shocks to the random variable ε combined with shocks to the parameter estimations or model (usually referred to as “coefficient-uncertainty”). Each realization of the shocks (i.e., each simulation), say j∈{1,2,…,J}, will produce a set of values for the vector (xj,yj,εj).

2. (C.2) Running the simulations through satellite models: For each realization of the shocks, the vector of simulated economic parameters is mapped, (xj,yj), into all satellite models. Each satellite model could bring its own source of additional uncertainty (through μst in the example of a time-series satellite model). The outcome of this second step is summarized with the set of simulated paths: (xj,yj,z1,j,z2,j,…,zS,j)=(xj,yj,zj), for all j∈{1,2,…,J}.

3. (C.3) Computing scenario probabilities/ severities: After completing the simulation exercise, the final step is to compute a probability for each simulated economic variable: (xj,yj,zj). To simplify things, decompose the vector of macroeconomic and financial series into observations over time: (xj,yj,zj)=(xjt,yjt,zjt), for all points in time t. Assuming the last observed historical value is t̃, the probability P(xjt>t̃,yjt>t̃,zjt>t̃ ) for each simulation j∈{1,2,…,J} needs to be computed.

In mathematical terms, let q∈{1,2,…,Q} represent the set of alternative score loadings (or marginal factors). The total score can be computed as a convex combination of these marginal scores:

To complete the final step, scores are mapped into probabilities.

This framework will help analysts attach probabilities to each and every economic scenario that is being proposed. For those frameworks that are built around severity/ probability thresholds, this foundation helps integrate the scenario phase into the overall stress testing program.

In this article, we propose an innovative algorithm that is well suited to building dynamic models for credit and market risk metrics, consistent with regulatory requirements around stress testing, forecasting, and IFRS 9.

In this article, we discuss development of a framework that addresses the forward-looking and probability-weighted aspects of IFRS 9 impairment calculation using macroeconomic forecasts. In it, we address questions around the practical use of alternative scenarios and their probabilities.

This article discusses how to address the specific challenges that IFRS 9 poses for retail portfolios, including incorporating forward-looking information into impairment models, recognizing significant increases in credit risks, and determining the length of an instrument's lifetime.

In this presentation we present a two-stage process that generates consistent, transparent scenario-specific forecasts for all relevant market and credit risk instruments, ensuring cross-consistency between projections for macroeconomic and financial series.

In this presentation, Dr. Juan Licari presents a two-stage process that generates consistent, transparent scenario-specific forecasts for all relevant market and credit risk instruments, ensuring cross-consistency between projections for macroeconomic and financial series.

This webinar discusses determining the best approaches for model development and governance for IFRS 9 Impairment calculations.