In the first quarter of 2016, the Federal Reserve released a revised proposal that would establish credit limits for unaffiliated counterparties of large financial institutions.1 The proposal – full of intricacies related to control relationships for economically interdependent counterparties – strives to provide additional transparency to the network of financial connections between large firms. Further details of the proposal are described in Figure 1.

While the proposed rule is a step toward improved financial market transparency, it has at least two weaknesses that require attention. First, it instructs financial firms to aggregate counterparties based on the likelihood that he distress of one could interrupt the other’s payment of liabilities, but does not specify a clear way to assess such relationships. Second, a bank’s ability to assess connections between two of its own counterparties does not necessarily allow it to detect problems arising from a third counterparty linking these two.

We propose a tool that allows banks subject to single-counterparty credit limit (SCCL) rules to accomplish both of these objectives, and therefore to satisfy the SCCL requirements for economically interdependent counterparties in a more concrete manner.

If enacted in their current form, the new SCCL requirements will require large financial institutions in the US, both domestic and foreign, to track and report their net credit exposures to unaffiliated counterparties based on many specific criteria. As has been the case for many recent expectations from the Federal Reserve, the proposal tailors supervisory expectations based on the size of the firm as well as its systemic footprint. Limits for allowable exposures, as well as frequency of reporting, are tiered in a manner similar to the revised US Basel III capital rules.2 Figure 2 outlines capital limits and reporting requirements for each tier of bank holding company (BHC).

Affiliated counterparties outlined in the proposal are generally aligned with control relationships, following the Fed’s definition of a subsidiary outlined in the Bank Holding Company Act of 1956.

The Fed’s definition of economically interdependent counterparties is a bit more convoluted and is based on six criteria outlined in the proposal. Generally speaking, the criteria have been established to track counterparties that are likely to move in tandem due to various economic and legal relationships between the counterparties.

The call for consistent data collection on a firm’s large counterparties is appropriate. Without additional analytics, however, risk managers will not be able to take advantage of actionable risk information as a result of such efforts. By design, limiting the analysis to assessing direct, "one step" connections ignores a large majority of the credit risk pathways linking these large firms. We now describe briefly a network-based toolkit that solves this problem.

A bank’s hedged and unhedged counterparty exposures provide direct measures for the potential for losses due to a counterparty default.

But indirect exposure, caused by the impacts of major counterparties on each other, can also play a significant role in raising a bank’s credit risk. For this reason, banks must take counterparty contagion risk into account in the risk identification process. In particular, risk identification should capture the observed effects of counterparty probabilities of default (PD) on the bank’s and other counterparties’ PDs over recent history. This is a direct way of satisfying the “financial distress spillover” requirement of SCCL regulation discussed in Figure 1.

As a concrete illustration of these ideas, we present a short case study based on a large global bank. We use estimates of a dynamic network model3 to measure the existence and strength of spillovers across counterparty PDs based on monthly data taken from the last five years. The underlying concept behind the dynamic network model is that of Granger causality. This is assessed based on the results of running a vector autoregression (VAR) using the PDs of each distinct pair of financial firms in the network. The particular network we use for this analysis is the global megabanks network, which includes all publicly traded financial firms worldwide with at least $100 billion in assets on their books.

The network model sources PD estimates from Moody’s Analytics CreditEdge, which provides default probability estimates for publicly traded firms around the world. The specific metric it uses to measure a firm’s PD is the one-year Expected Default Frequency (EDF™). EDF metrics are estimated using combined information on firm balance sheets, the market value of traded equity, and a large history of observed default events. In the dynamic network methodology, firms whose EDF movements forecast movements in the EDFs of many other firms are recorded as being highly connected and having an outsized influence on systemic risk.

To illustrate the application of the network model to the “financial distress spillover” aggregation rule, we discuss briefly the case of an unnamed large global bank, which we will refer to as the “test bank.” Note that the analysis that follows would proceed in exactly the same manner for any other bank in the network.

Our analysis relies on an anonymized list of 22 counterparties for the test bank, which was determined based on its largest direct counterparty exposures. Because we already know which counterparties the bank has direct exposure to, our interest is in comparing this information against the sensitivities measured by the dynamic network model and ranking the counterparties in order of the test bank’s sensitivity to their PDs.

Our findings are as follows. First, of the 22 direct test bank counterparties, the measured predictive ability of one counterparty in particular – let us call this “counterparty V” – was much greater than for all the rest with respect to the EDF of the test bank. The sum of the first and second monthly lag coefficients in the VAR(2) models involving our test bank and each of its major counterparties, respectively, line up closely with the results of the F-test used to assess which banks Granger-cause the test bank’s EDF. Figure 3 displays a bar chart of the values of these sums by (anonymized) counterparty, with counterparties arranged by increasing order of the sum. Somewhat surprisingly, we find that only bank V Granger-causes the test bank’s PD (based on the 5% significance threshold for the relevant F-test), although the sum of coefficients is positive for all but three of the counterparties. By computing this same (or similar) measure for any bank in the network with respect to all of the other firms, it is straightforward to satisfy the Fed’s “financial distress spillover” rule: Simply aggregate counterparties with positive spillover strength over an appropriate threshold. 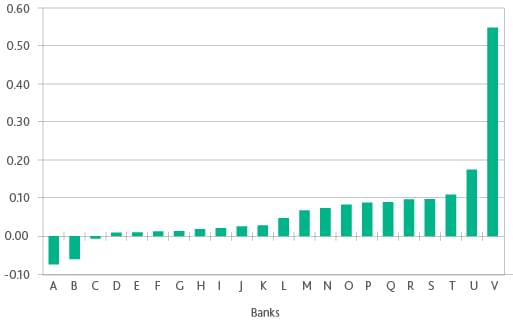 Our second finding relates to validation. One simple way to validate the network model for the purposes of counterparty risk identification is to rank each of the financial institutions in the network based upon the combined strength that the credit risk of the test bank’s 22 counterparties exerts upon them. If the test bank ranks highly in this list, this verifies that its list of major direct counterparty exposures strongly influences its credit risk. Upon performing this exercise for the network of global megabanks, we find that our test bank falls at the 80th percentile according to this measure for the list of 22 counterparties. This demonstrates that our test bank is high on the list of large financial firms whose credit risk is driven by the credit risk of its largest counterparties. Figure 4 illustrates this result. 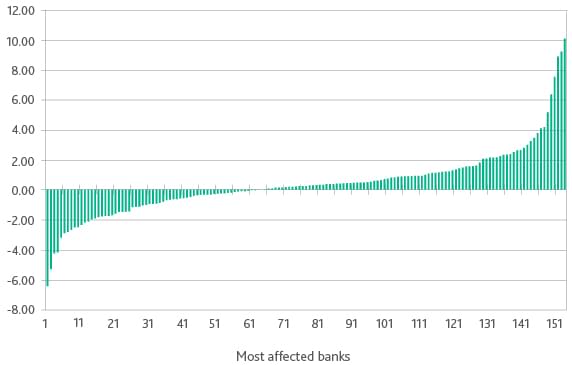 Finally, on the issue of third-party risk transfer, much can be learned about potential knock-on effects from a counterparty default by looking at which of the test bank’s counterparties Granger-caused each other and ranking which of these contagion channels are strongest.

The systemic and counterparty risk surveillance tools provided by dynamic network models can be productively used to shed light on which of a bank’s known counterparties most influence its credit risk based on measured relationships from recent history. Counterparties can be grouped based on the strength of their relationships with one another. Further information about the methodologies used here can be found in Hughes and Malone (2015) and Malone (2015, 2016). For regulatory purposes, the strength of the spillover effects between counterparties can be used to group them in order to satisfy SCCL regulation.

1 Board of Governors of the Federal Reserve System, 2016.

Board of Governors of the Federal Reserve System. “Calibrating the Single-Counterparty Credit Limit between Systemically Important Financial Institutions.” March 2, 2016.

This paper gives an overview of the Moody’s Analytics model of bonds' Fair Value Spread and Alpha Factor.

Adjusting Capital Planning and Strategies for a COVID-19 Scenario

Nobody expected the end of the economic cycle to happen so suddenly, but adjustments will be required given the materiality of the events unfolding. How can you quickly adjust for an ever-evolving scenario where today’s assumptions may not hold tomorrow.

In this paper, we propose an alternative simple, coherent methodology that allows us to forecast and stress test the entire balance sheet and income statement for all of the roughly 6,000 banks in the United States consistently.

As COVID-19 spreads globally, fear and uncertainty are rising, roiling financial markets and pushing the global economy towards recession. This report uses Moody’s Analytics CreditEdge™ public-firm EDF™ (Expected Default Frequency) metrics to assess the impact that the coronavirus has had so far on credit risk.

Incorporation of CECL Into Stress Testing and Capital Planning

Join our experts as they review the business challenges that CECL presents beyond the reporting date numbers.

The COVID-19 Pandemic: Assessing the Impact on Corporate Credit Risk

In this webinar, we will use Moody’s Analytics EDF metrics to assess the impact COVID-19 has had so far on corporate credit risk.

Fixed income and equity investors face growing pressure to measure and monitor the ESG risk of their portfolios.