Not Yet Out of the Woods. How Will Climate Risk Impact Boeing’s Credit Risk?

Over the past two years, Boeing Corporation has seen a rise in credit risk led by traditional credit risk indicators such as revenue. Increasingly, climate risk will affect credit risk, and traditional models will need to be adapted to incorporate climate-related factors to accurately assess risk.

Boeing’s increased credit risk has been driven by low sales of the 737 MAX due to safety concerns and an overall lack of demand during the global pandemic. These trends are well captured by CreditEdge, the Moody’s Analytics public firm credit risk model.

Because climate risk is of growing concern, we have adapted CreditEdge to offer analysis and quantification of the effects of both the physical and transition risks related to climate change. This adaptation produces credit risk estimates for leading climate scenarios. In this paper, we discuss credit risk forecasts for Boeing and describe how our adapted model incorporates climate risk.

Climate risk includes physical risks — such as extreme weather events and chronic changes to climate — and transition risks, such as policy and technology adaptations, and changes to consumer preferences. These risks are complex, not typically captured by traditional drivers of credit risk, and relatively recent considerations in finance.

Aviation is a sector greatly affected by climate risk. This is because many firms are manufacturers with considerable physical facilities and the core business is the production of aircraft, a product that requires fossil fuels to operate and thus may be affected by policy changes related to carbon emissions. For Boeing, climate risk may be material and may impact credit risk significantly under certain climate scenarios.

Between January 2019 and May 2020, Boeing’s expected default frequency (EDF), a measure of its probability of default (PD), increased by a factor of 17, attributable to increases in both its business risk and financial risk. The underperformance of its commercial airplane business following the 737 MAX crashes was exacerbated by the COVID-19 pandemic in March 2020, which led to global lockdowns that brought travel to a standstill, paused commercial aircraft production, and reduced future orders. As a result, Boeing’s asset value dropped sharply, leading to a rapid rise in its one-year EDF, which reached a peak of 2.13% in May 2020.

Looking ahead, an emerging risk for Boeing is climate risk. We use climate-adjusted EDFs driven by climate scenarios from the Network for Greening the Financial System (NGFS) to assess Boeing’s credit outlook across four possible paths. These paths differ by the timing and severity of policy actions. We then separate climate risk into physical and transition risk to complete the analysis.

It is useful to think of EDF measures as driven by two fundamental risk factors: business risk and financial risk. Business risk is measured by the volatility of a company’s asset value, while financial risk is measured by leverage. A firm’s asset value is composed of much more than the sum of its physical and financial assets, especially for companies with substantial non-physical assets such as intellectual property. Asset value measures the going concern value of a company, and the volatility of this value is directly related to the company’s business risk. Leverage is the stand-in for financial risk in the EDF model, and is measured on a market-value basis, inferred from equity valuations rather than from book (accounting) values. Market leverage is the ratio of the company’s default point to its asset value.1

Figure 1 tracks the two factors driving Boeing’s EDF metrics. Boeing’s market leverage increased gradually between January 2019 and May 2020 due to a continued rise in its default point (dark blue line) and decreasing market value of assets (green line). An increase in the default point is a direct result of an increase in Boeing’s short- and long-term liabilities. Boeing’s $8 billion increase in liabilities in its 2019 fiscal year is almost completely accounted for by customer concessions and other considerations resulting from the 737 MAX fatal crash incidents and subsequent groundings. Business risk, measured by asset volatility (light blue line), increased throughout 2019 and 2020, before stabilizing. From December 2020, Boeing’s financial risk steadily decreased, with rising commercial orders due to the lifting of COVID-19 restrictions and the gradual restoration of 737 MAX flights raising Boeing’s market value of assets while its default point also decreased slightly.

As conversations about the impact of climate risk on business and finance heat up, investors are increasingly considering climate risk factors. Pressure to account for climate risk is coming from markets, as investors are demanding firms disclose current emissions and future targets, and from regulators, which are likely to implement emissions-focused policy action in the coming years. This means Boeing is exposed to both physical and transition risk, both of which need to be considered. Climate events may cause Boeing to suffer damages to physical assets or disruptions to its business, whereas policy changes such as a carbon tax could lead to increasing fuel prices and new green technologies.
For Boeing, this means both challenges and opportunities await.

To account for future climate risks and the potential impact on credit risk, we have introduced a climate adjustment to our EDF methodology. The climate-adjusted model integrates climate scenarios devised by the NGFS to forecast climate-adjusted EDF measures, allowing us to map temperature and emissions pathways to credit risk for corporations.2 These scenarios differ by the timing and severity of the policy response to climate risk, including scenarios for early policy action, late (but more drastic) policy action, and two variations of no policy action.

Comparing the four climate scenarios, Boeing’s 10-year EDF measure is lower in the Early Policy scenario than in the No Policy or Late Policy cases. By 2050, the Late Policy and Early Policy EDFs nearly converge and remain lower than for the No Policy scenario. This may indicate that clear policy reduces volatility in this industry or that climate policy may create growth opportunities for Boeing related to green technologies and new business models, or both.

The components of climate-adjusted EDF measures

A firm’s climate-adjusted EDF measures can be assessed in sum or separately as physical risk and transition risk. Physical risk includes acute risks due to extreme weather events and chronic risks such as sea level rise and temperature increases, both of which can affect a firm’s operations, workforce, markets, infrastructure, raw materials, and assets. For example, firms with operations in countries at low elevations may face greater physical risk from rising sea levels. Transition risk includes the risks arising from the transition to a lower-carbon economy, considering factors such as policy changes, technological improvements, and shifts to consumer preferences. For example, as a carbon tax would increase the input price of energy, firms in energy-intensive sectors such as mining will face greater transition risk.

Figure 3 shows the impacts of physical and transition risk on Boeing’s EDF projections separately. When considering physical risk, the baseline scenario assumes no additional physical risk3 (as it does not include climate risk) and thus the lowest level of credit risk overall. The Early Policy, Late Policy, and No Policy scenarios are essentially the same, as they assume similar physical risk levels, and the projected EDF measures are within
5 basis points throughout the forecast, and 20–30 basis points above baseline. The Quick No Policy scenario assumes the highest physical risk at the 95th percentile of damages, and unsurprisingly the highest level of credit risk: 25 and 50 basis points higher than the other physical risk scenarios in 2035 and 2050, respectively.

Adopting climate policy immediately results in lower transition risk for Boeing, entirely negating the increase due to physical risk in the first half of the forecast. With no policy action through 2030 (a consistent feature of the No Policy, Quick No Policy, and Late Policy scenarios) credit risk increases relative to baseline, implying that transition risk results in credit risk increasing by roughly 5 basis points. These forecasts diverge after 2030 as the implementation of a climate policy lowers credit risk, eventually to a point where it drops below baseline and approaches the level of transition risk in the Early Policy scenario.

Conversely, adoption of early climate policies as opposed to no new policies reduces Boeing’s transition risk by 20 basis points in 10 years and 30 basis points in 30 years. This may be driven by Boeing’s perceived ability to adjust to climate-related policy changes, such as carbon taxes and caps, regulations on goods and services, and climate-related shifts in market preferences and technologies – or perhaps by the reduction in asset value volatility in this sector more broadly. For its part, Boeing has reported that it is already shifting its focus to reducing carbon emissions and finding alternate fuels for the company’s operations. For example, new commercial airplanes are already 15% to 25% more fuel efficient than their predecessors. Furthermore, Boeing has pledged to have all its aircraft fly using 100% sustainable aviation fuel by 2030, which can reduce emissions by up to 80% compared with conventional jet fuel.4 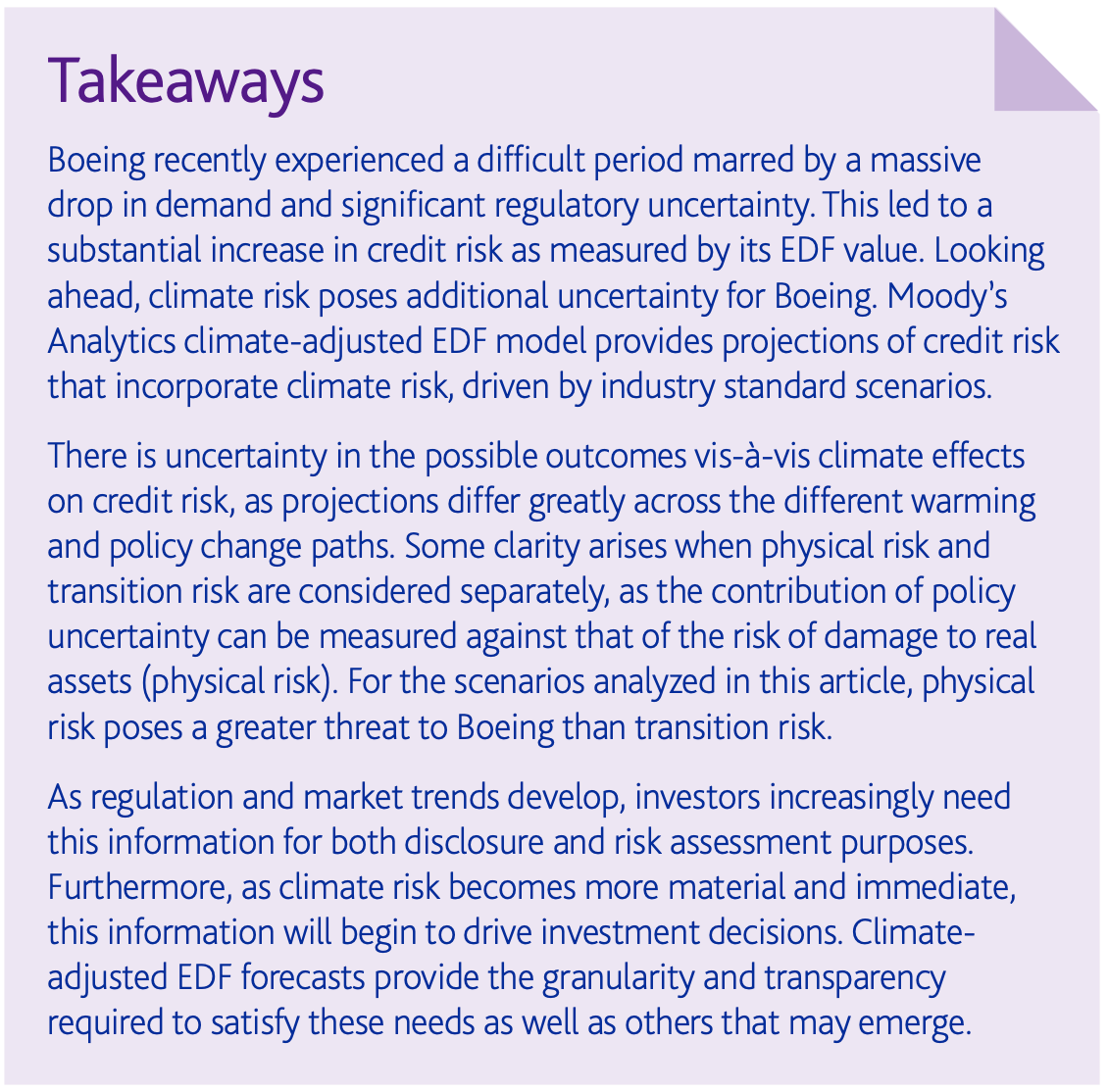 1 An overview of the EDF model can be found in “EDF9: Introduction and Overview,” Moody’s Analytics, June 2015.

3 Some physical risk may already be priced into markets and this will be reflected in baseline EDF forecasts.