Recently, Buy Now, Pay Later (BNPL) services have emerged as a viable alternative to traditional credit. However, new regulations and weaker than expected performance in this space highlight the risk of this debt for both consumers and lenders.

BNPL represents a new take on an old business. As household debt burdens rise, we examine how loans sharing BNPL characteristics have performed historically to get a clearer picture of the potential risk. Our analysis shows that credit score, income, home ownership, and age are highly predictive of credit risk in this segment.

Although BNPL is a new product, this type of loan mimics more traditional short-term installment loans. BNPL loans usually require a relatively small down payment (often 25% of the total cost), and the remaining balance is paid off in a series of equal installments, with or without interest. As transactions from BNPL services approach $100 billion,1 the potential risk to lenders and household balance sheets grows.

Oftentimes lenders are not checking credit scores when borrowers apply because the loans are small with the first payment due at checkout. While BNPL might seem less risky than a credit card because they are installment loans, lending standards are looser, and this exposes lenders. When surveyed, BNPL borrowers are riskier as they are more than twice as likely to have an overdraft compared to all adults.2 Regulators have taken note and are concerned about the accumulation of debt along with regulatory arbitrage and data harvesting. Getting a true picture is confounded by the fact that the product grew rapidly during a period of ample government stimulus and credit score inflation, making it a perfect environment for masking default risk.

We aim to better quantify these risks by using data from Equifax on installment loans with similar characteristics to BNPL loans. The loans in the bureau data share many characteristics with BNPL loans. Besides having a short-term length, their loan size is typically less than $500 and these loans are unsecured. Furthermore, these loans are also held by younger individuals3 with poor credit scores.4 Using this data as a proxy for BNPL loans, we show that the risks are not nearly as homogenous as they may seem for a product that often does not require credit checks. Borrowers with this type of debt often overextend themselves, as they typically have lower income levels. In the event of non-payment, recoveries are difficult as borrowers are less established financially due to their lack of home ownership. 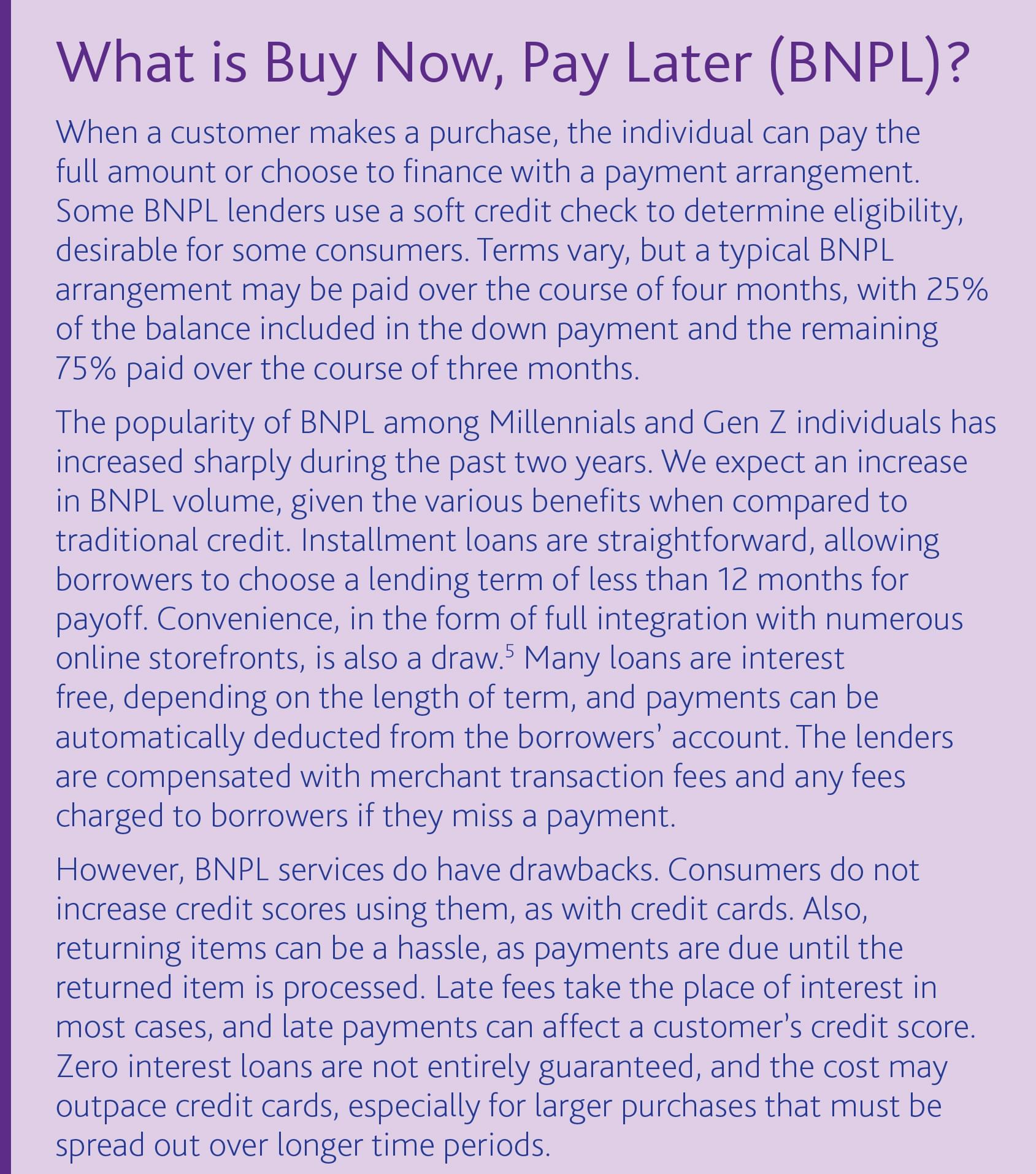 BNPL lenders are only starting to report to credit bureaus, so we must look elsewhere for data to get a full picture of the risk. To make our assessment, we first turn to the short-term personal loan segment of retail credit6 as a case study for performance.

Which borrowers are riskiest?

Figure 1B displays the cumulative default rate by credit score in the short-term, personal loan market. We expect that, all else equal, a lower credit score increases the probability of default. This holds true in this credit space, where 20% of loans issued to borrowers with the very lowest credit scores default within 12 months on book, while less than 2% of borrowers default if they have a prime score (700 or above). The stark difference in performance suggests that lenders can better manage their risk by checking credit histories, to help identify the riskiest borrowers.

Another interesting dimension of default risk in short-term installment loans may be the presence of a mortgage. Borrowers who do not own their home lack the financing options of their more established peers. Figure 2A shows borrowers without mortgages seek short-term loans and receive more than 80% of all loans in this segment. Whether owning a home gives better access to credit or means that the borrower is less likely to use point-of-sale financing, the vast majority of short-term borrowers are not home owners. Figure 2B shows the average cumulative default rate by presence of a mortgage. The graph illustrates that non-mortgage holders’ default at nearly three times the rate of mortgage holders on their short-term personal loans, which signifies that home-ownership is an important characteristic to consider in the origination process.

Figure 3A displays short-term loan origination volume share by age since 2005. Current trends in the short-term loan market suggest that young adults consistently borrow the most by volume with adults age 25–34 making up the bulk of the short-term installment loan customer base. Very recently, the share for this age group has surged higher as this demographic segment seeks an alternative to traditional credit. Given the historic popularity of this debt type by younger borrowers, it should be no surprise that young adults seek BNPL loans as they hope to find a more manageable payment schedule and avoid interest payments as they are building up their finances.

Figure 3B displays cumulative default rates by age. Young adults are in fact much more likely to default than older borrowers, suggesting that BNPL is exposed to a particularly risky population, which is likely to earn less and have a weaker attachment to the labor market. Furthermore, younger borrowers are increasingly less reliant on traditional sources of income, meaning their cash flow is less certain.

From a credit risk perspective, it is important to understand current and future economic conditions as they correlate with changes in outstanding debt performance. For example, a weaker economy leads to more borrowers in delinquency and default. However, in the case of very short-term installment loans, this relationship is tenuous. Figure 5 shows that default rates on personal loans with terms less than six months did not exhibit a sharp rise during the Great Recession, which is in stark contrast to other consumer loan products. Defaults appear to have been suppressed during the COVID-19 recession, but less so than other retail asset classes. This apparent lack of macro sensitivity is evidence that understanding individual borrower risk should be the principal concern for a lender in comparison to macroeconomic risk. Nevertheless, it is reasonable to expect defaults to rise as the credit market normalizes. 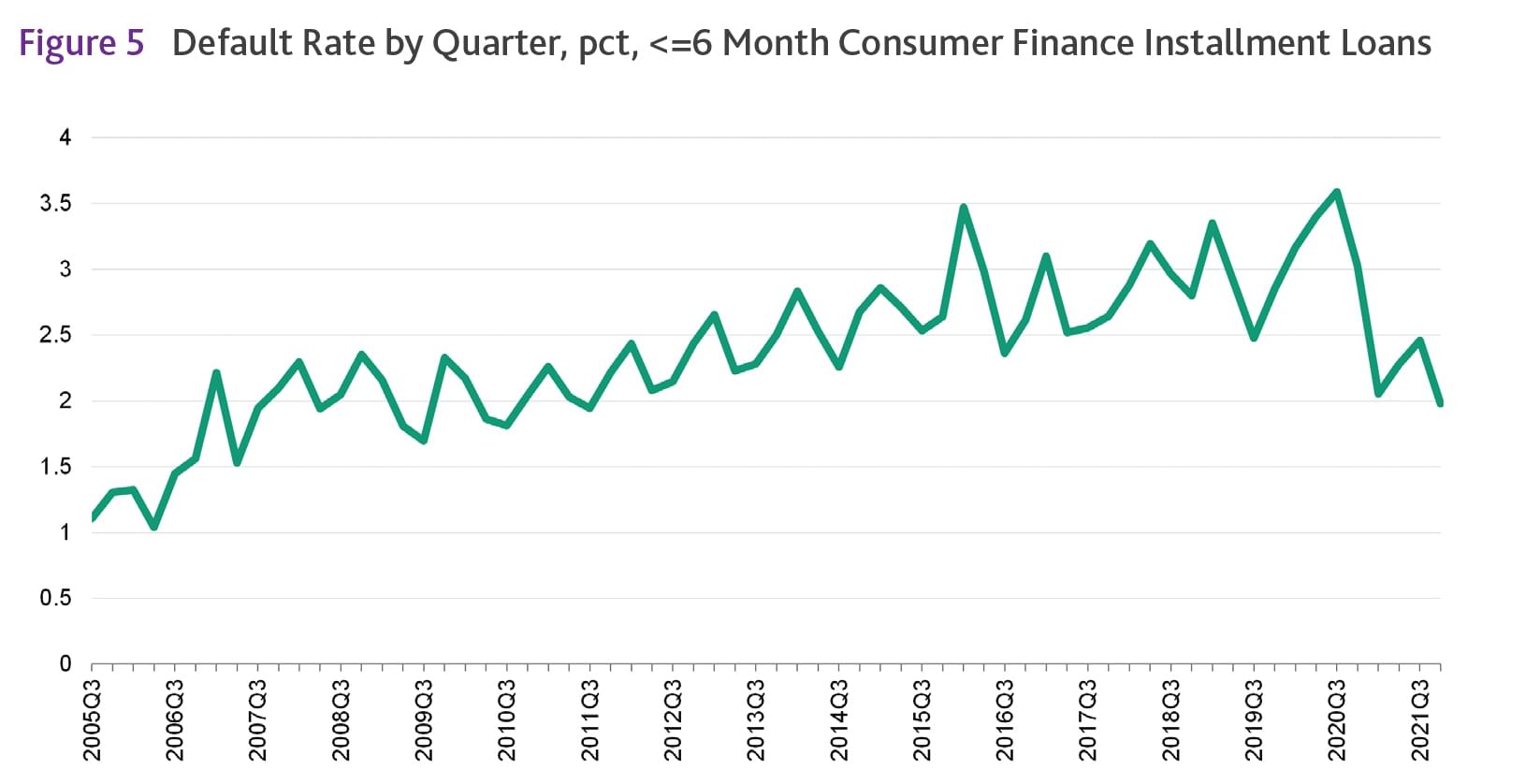 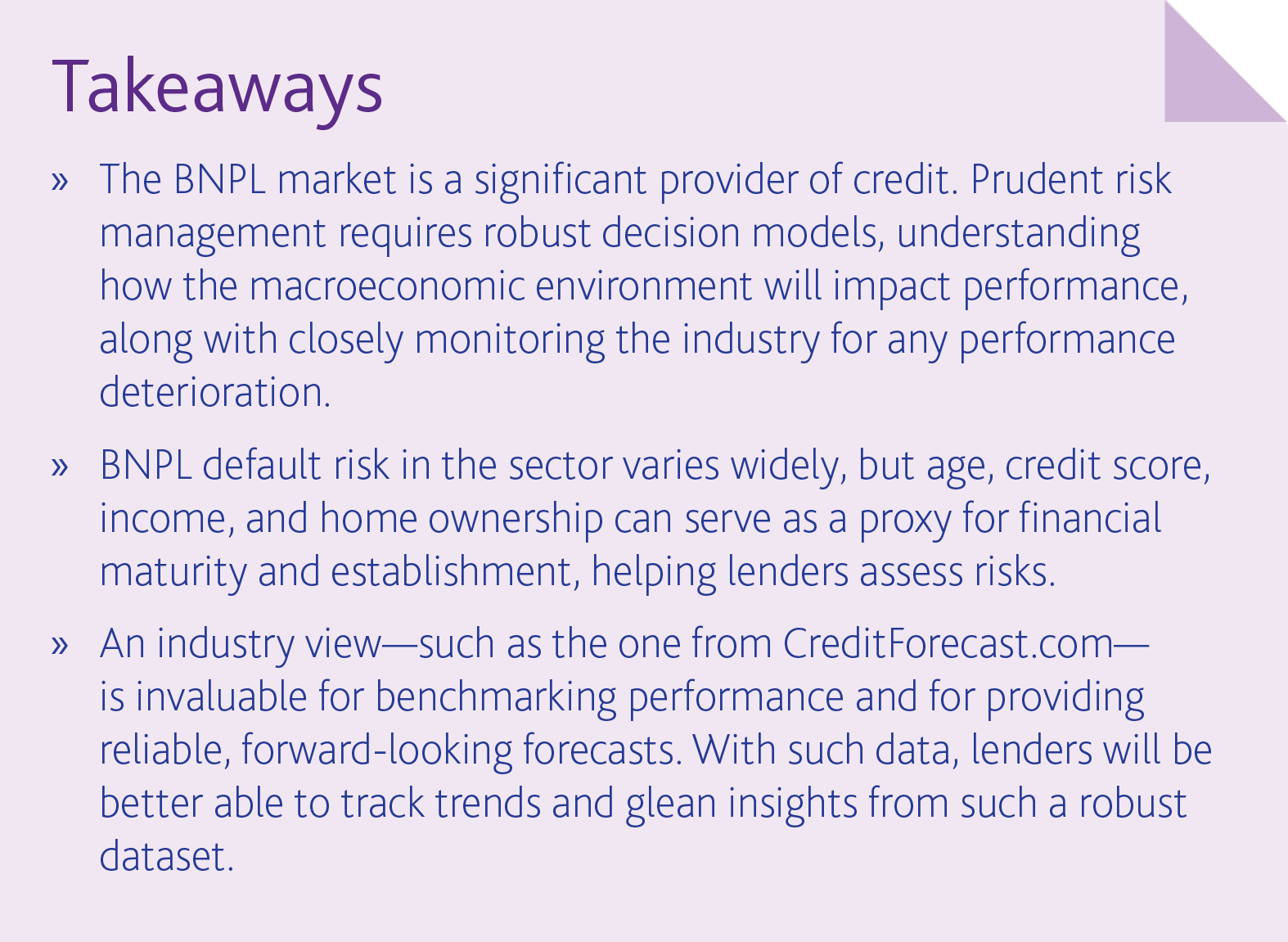 5 Lenders have typically included fintech startups like Afterpay and Klarna; large companies like Apple, Square, Amazon, and even JP Morgan Chase offer BNPL solutions. The Affirm-Amazon partnership is just one example of the many agreements between lenders and stores, which allows customers to purchase a wider variety of goods and services using installment loans.