With the introduction of the IFRS 17 accounting standard, it is important that insurers understand the patterns of profit emergence that arise for their business under the standard, and how business and methodology decisions available to the insurer affect such patterns. As a principles-based standard, insurers have several immediate decisions to make in their specific implementation, and such decisions can have a major impact on the timing of reported profit and loss.

In a previous paper1, we considered some aspects of profit emergence under IFRS 17, focusing on the impact of non-financial (longevity) risk on the IFRS 17 balance sheet and income statement for a group of annuity contracts. In this paper, we turn our attention to financial risk and its impact on contracts with participation features. We focus on two aspects in particular: (1) differences in profit emergence between the Variable Fee Approach (VFA) and General Measurement Model (GMM), and (2) the impact of risk mitigation. We explore these themes using an illustrative example contract group.

Example product and introduction to the VFA

The illustrative contract group considered here consists of 100 contracts, with a coverage period of 10 years and single premium of CU (Currency Unit) 150 per policy received immediately when the contracts are issued. In return, the contract provides the following benefits:

At inception, the account balance is equal to premiums paid, and subsequently evolves each year based on returns on an equity fund, subject to an annual charge of 1% to reflect investment services provided2.

We assume that this contract group qualifies as a contract with ‘direct participation features’. The basic idea of the VFA is that the liability value for such contracts can be considered to be the sum of two components:

Under the VFA, the impact of financial risk on changes in the value of liabilities is recognized differently between these different components. Changes in fair value of underlying items are realized immediately in P&L (Insurance Finance Income or Expense). In contrast, changes in the variable fee due to financial risk adjust the CSM (Contractual Service Margin)4, which is subsequently released (as Insurance Service Result) as services are provided. This is motivated by the argument that contracts with direct participation features substantially offer investment services, and the variable fee is the entity’s compensation for providing such services.

To illustrate the mechanics of the VFA, and how it compares to the GMM (General Measurement Model), we consider the impact of changes in the underlying items on the IFRS 17 balance sheet and P&L. We quantify the impact of such changes on the illustrative contract group over the first year since the contracts were written. 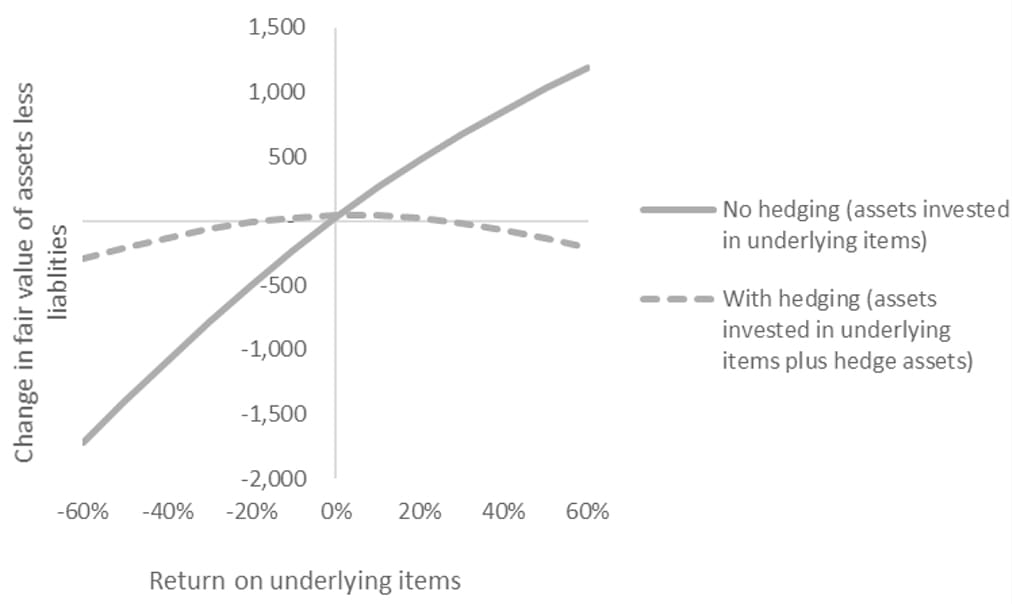 When a risk mitigation strategy is in place, the entity can opt to recognize the effect of changes in underlying items (on the components of the variable fee being hedged) in P&L rather than adjusting the CSM, subject to certain qualifying criteria7. As the hedge assets will usually be measured under IFRS 9 at Fair Value through P&L, this option prevents an accounting mismatch that would otherwise arise. The orange squares in the Figure 2 show the total P&L when the hedge is in place, under the VFA approach (assuming the hedge meets the qualifying criteria that allows the risk mitigation exception to be applied). 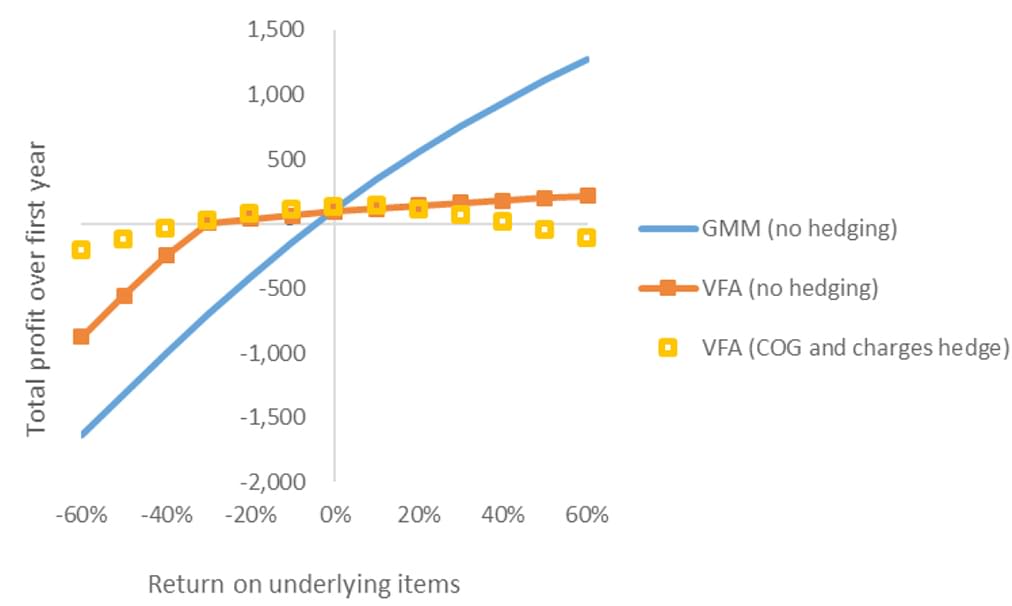 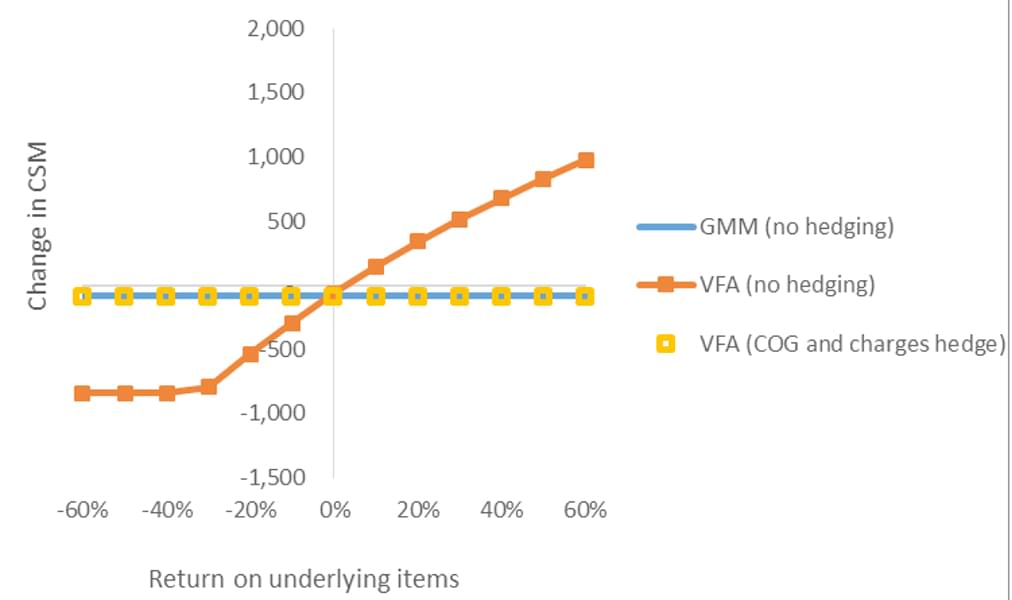 The CSM serves to hold back profits (or absorb losses) so that P&L is released over time. To understand profit emergence under IFRS 17, and in particular the impact of hedging, we must consider how profit emerges not just in year 1 but over the entire coverage period.

Projection of P&L over the coverage period: Example scenarios

In this section, we consider projections of P&L for the illustrative contract under two example scenarios. One thousand scenarios for liability discount rates and equity fund returns were generated using the Moody’s Analytics Economic Scenario Generator using a ‘real world’ calibration, and the IFRS 17 balance sheet and income statement calculated in each scenario at each time step8. The two scenarios analyzed here were selected as illustrating particular aspects of profit emergence under the VFA.

Figure 4 shows the underlying fund returns (right axis) and the resulting total profits under the GMM and the VFA. 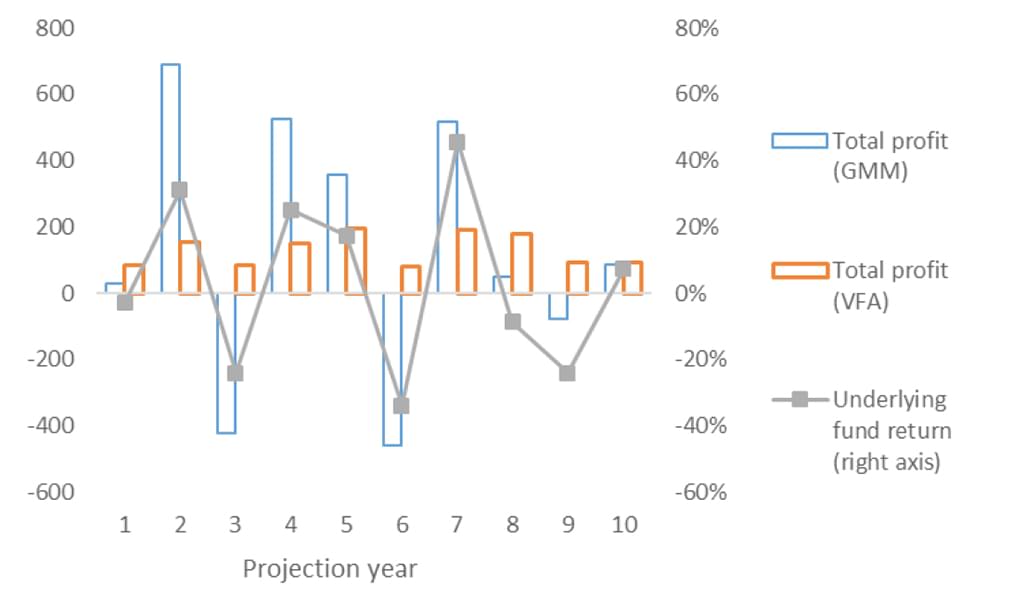 Under the GMM, all impact of financial risk is realized immediately in P&L. Volatility in the underlying items therefore translates directly into volatility in P&L. Under the VFA, changes in the variable fee are smoothed out over time via the mechanism of the CSM, rather than being realized immediately as they occur. This smoothing mechanism only operates while the CSM is positive, which it is over the entire coverage period in this particular scenario. Although there are relatively large positive and negative returns in this example, there are never enough cumulative negative returns of sufficient size to wipe out the CSM. In particular, the two large negative returns (at years 3 and 6) happen to both be followed by large positive returns. They also happen to occur at time when the CSM is relatively large due to previously large positive returns. Figure 5 shows the projected CSM over time in this scenario. 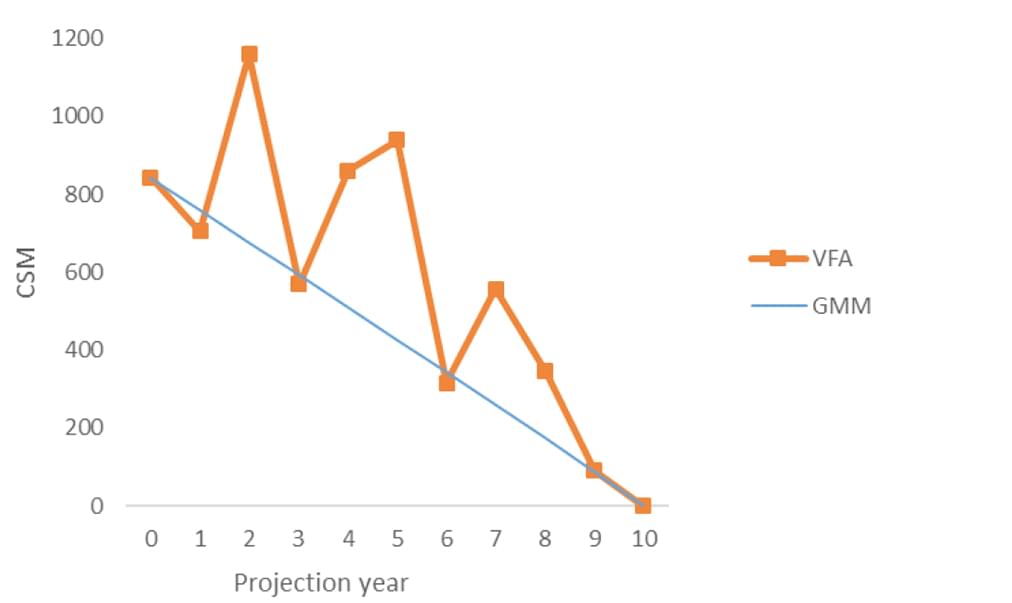 This scenario was chosen as one where there are large consecutive falls in the underlying items early in the projection. In this case, total profits are shown for the VFA only. We compare the case where assets are invested in the underlying items with no hedging, and the case where both the cost of guarantees and the value of future charges are hedged (and the hedge qualifies for the risk mitigation exception to be applied).

In this scenario, there are consecutive negative returns on underlying items in years 2-5. The large fall of 24% in year 2 is followed by an even larger fall of 55% in year 3. In the unhedged case, the CSM at the start of year 3 is not large enough to absorb the impact of this large fall, the contract becomes onerous, and a loss of -577 is immediately realized. In fact, in this scenario, the contract remains onerous until the end of the coverage period, so that all subsequent changes in the variable fee result in immediate P&L. In particular, the negative returns in years 4, 5, 7 and 10 all result in realized losses. 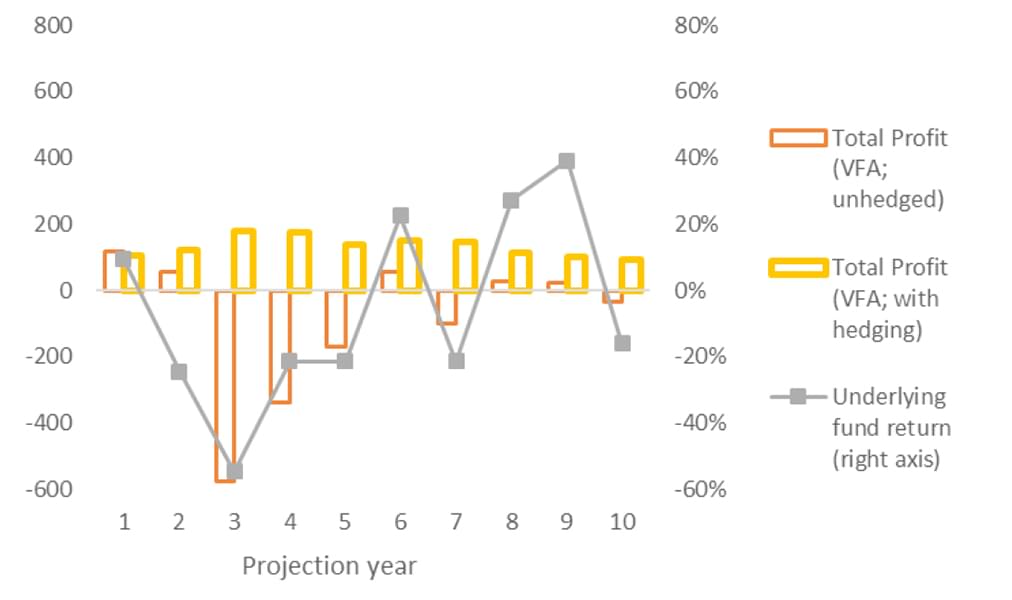 In the hedged case, changes in items being hedged result in immediate P&L rather than adjusting the CSM (assuming qualifying criteria are met). These changes approximately cancel against the corresponding P&L on the hedge assets (with some residual P&L reflecting any hedge mismatch) resulting in a far smoother pattern of profit emergence.

The scenarios presented in the previous section are just two of many scenarios that might arise in the future. Here we quantify the distributions of P&L using 1,000 stochastic scenarios.

First, we explore the relationship between profits at consecutive years. Previously, we highlighted that the VFA lowers the impact of financial risk on year 1 P&L using the mechanism of the CSM. To explore further, we plot the total profit realized in year 2 against the total profit released in year 1, in the 1,000 stochastic scenarios. Figure 7 compares P&L in years 1 and 2 using the VFA approach without any hedging (left chart) and with assets hedging the variable fee (right chart).

As noted earlier, the overall variability of P&L in year 1 is similar whether hedged or not. Figure 7 highlights two key differences between the hedged and unhedged cases: 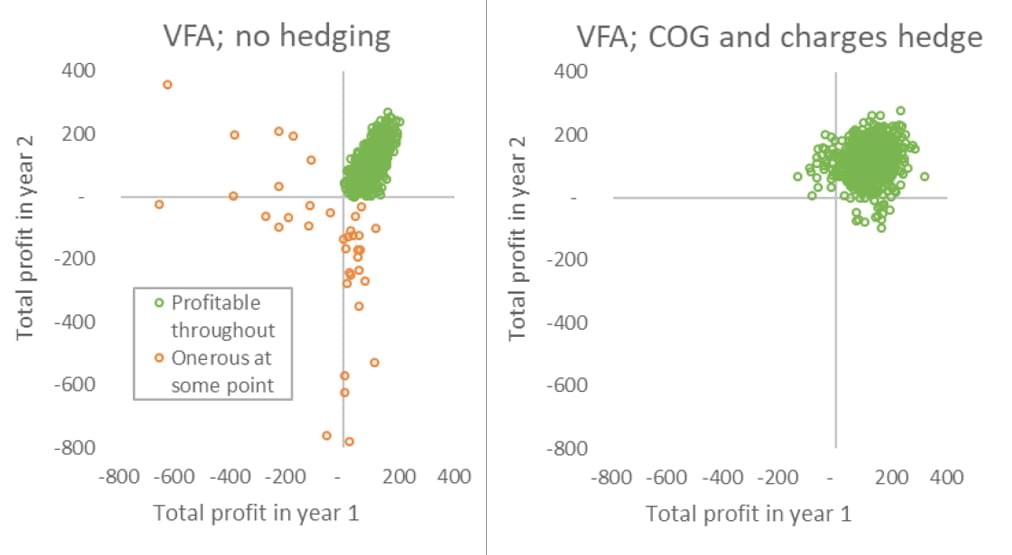 The VFA is used in all cases, and the risk mitigation exception applied where relevant.

In the absence of hedging, we expect profits to increase over time on average. This is due to the accumulation of unearned profit over the early years of the projection due to increases in the variable fee, which is subsequently released as service is provided. Although profits are positive throughout time in most scenarios, there is a chance of experiencing a loss, corresponding to scenarios where the CSM is too small to absorb changes in the variable fee and the contract becomes onerous.

Hedging has the expected effect of reducing uncertainty in profits at each future year, in particular lowering the probability of becoming onerous (as part of the change in variable fee is hedged, so the CSM has a greater chance of being able to absorb any remaining losses). 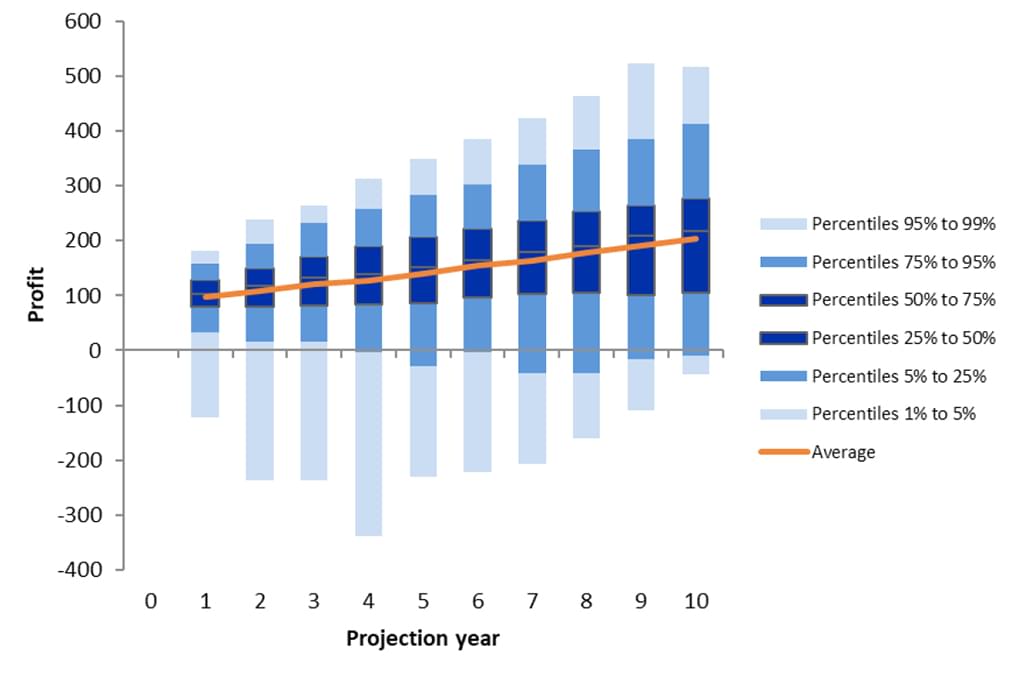 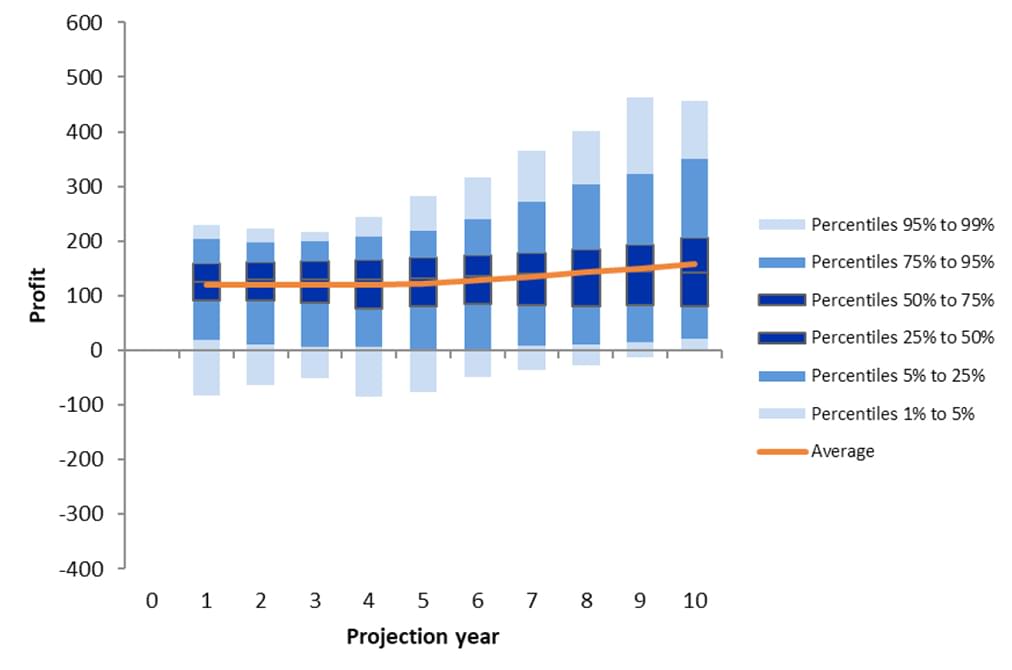 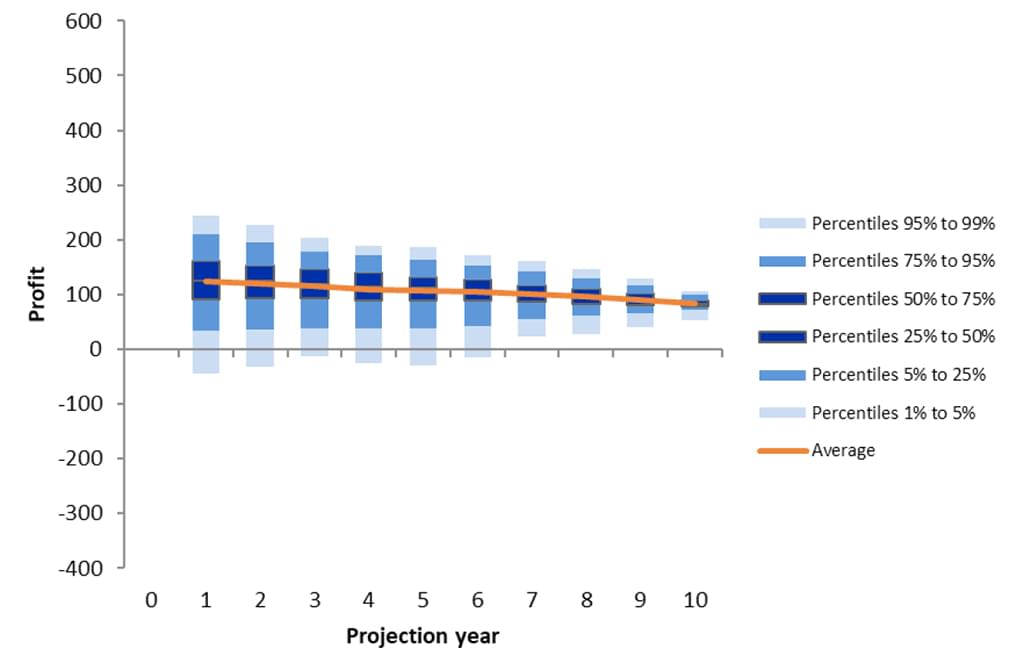 As noted earlier, the difference in accounting treatment depending on whether part or all the variable fee is hedged means that the analysis of realized profit over any one year does not give a complete picture of economic profit. For example, Figure 8 indicates that the distribution of realized profits over the first year is similar regardless of the hedging strategy. However, we know from previous analysis that the distribution of unearned profits varies considerably, as unhedged changes in the variable fee adjust the CSM. In the case where only the cost of guarantees is hedged, for example, the hedge is expected to smooth variability in economic profit, while the remaining component (the value of charges) continues to adjust the CSM and is gradually released over time.

To understand the true impact of hedging, it is helpful to measure the distribution of cumulative profit i.e. the sum of P&L realized to date, as shown in Figure 9. In particular, at the end of the coverage period, the distribution of cumulative profit is independent of accounting treatment and reflects the true economic performance of hedging. Although the variability of profits is smoothed out under the VFA (without hedging), the accumulated profit in future years can vary widely depending on the particular economic scenario. 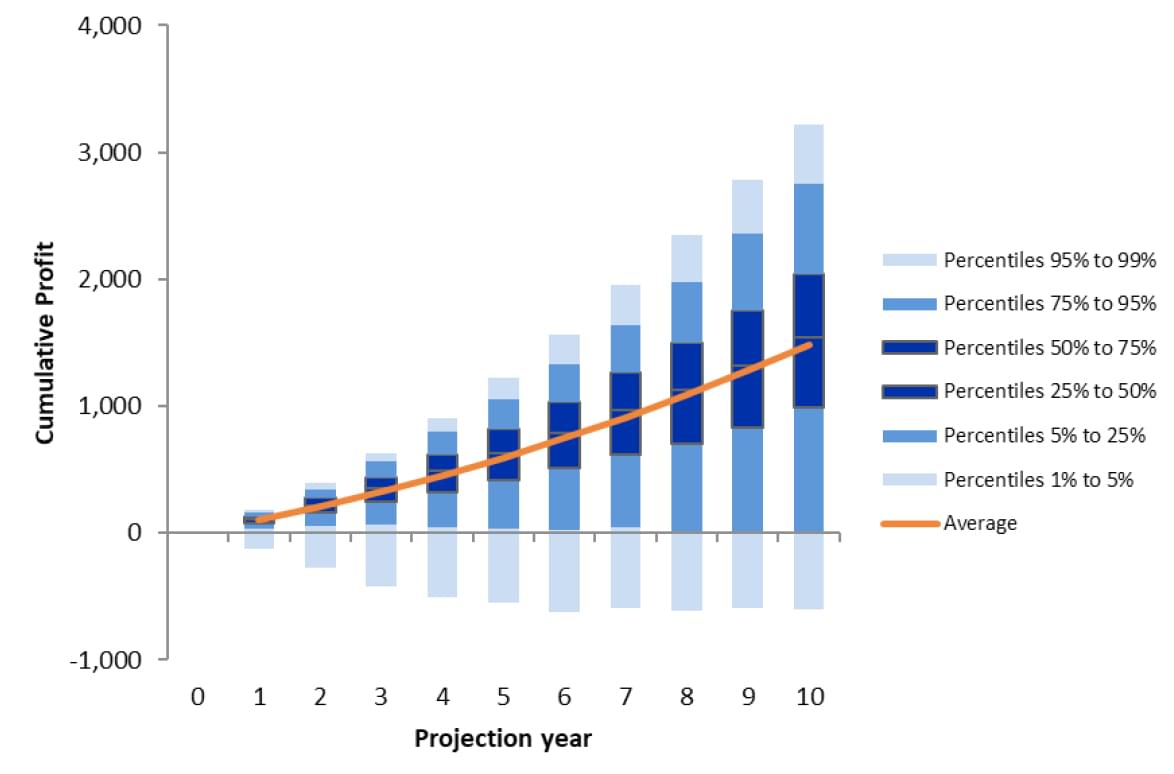 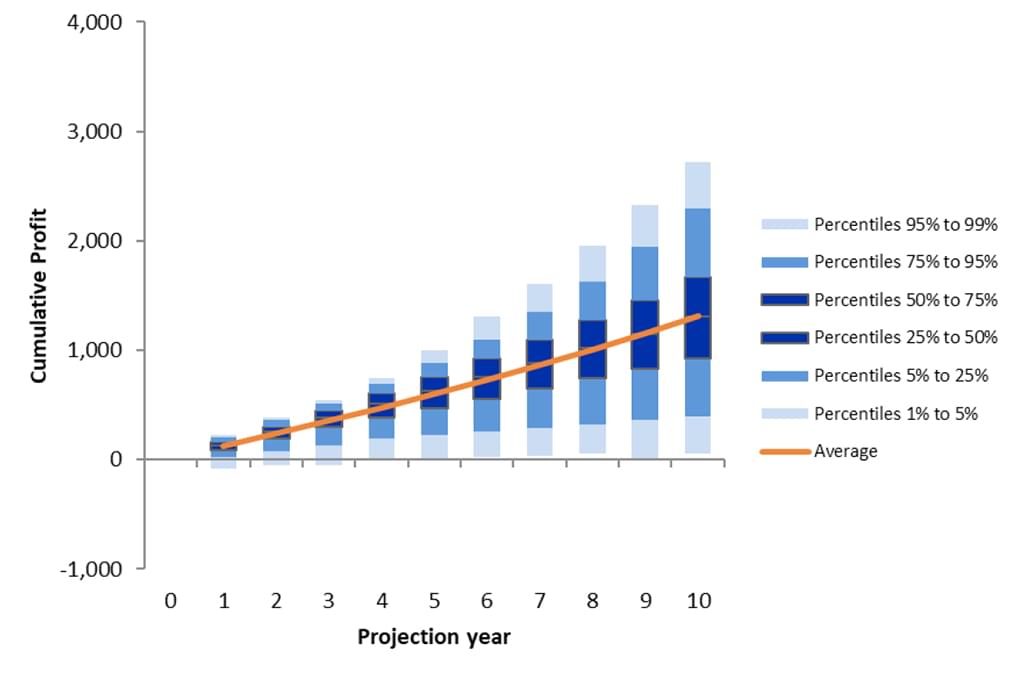 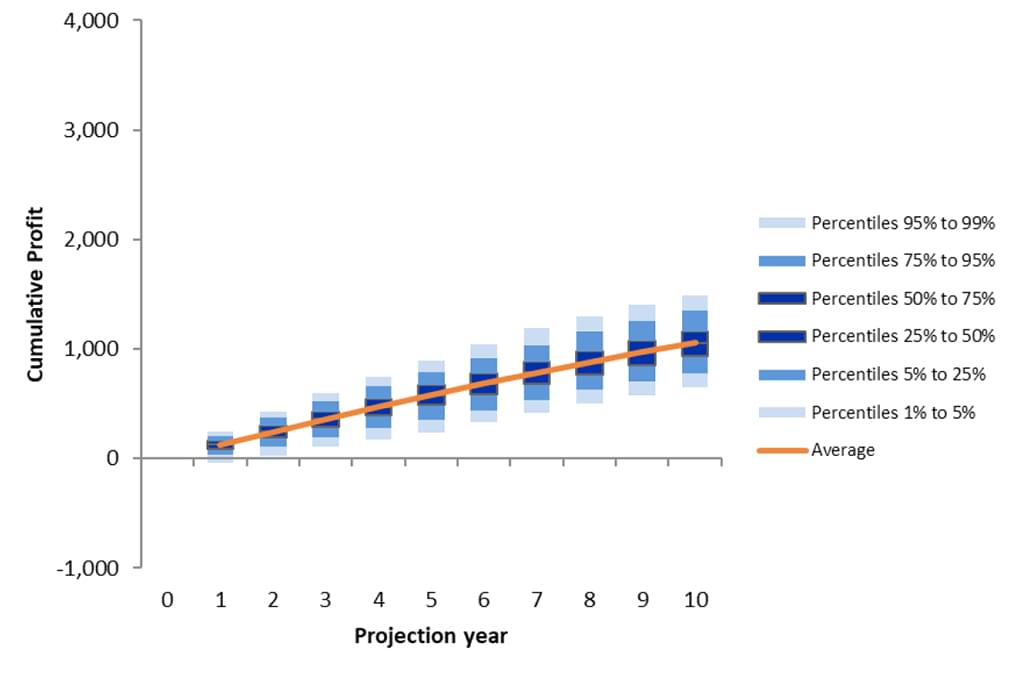 2 The contract is based on that described in Example 9 of ‘Illustrative examples on IFRS 17 Insurance Contracts’ (IASB, May 2017) but with modifications to the assumed coverage period, size of annual charges and mortality rates.

3 Appendix A of IFRS Insurance Contracts (May 2017) defines ‘underlying items’ as ‘Items that determine some of the amounts payable to a policyholder’. In the example here, the fair value of the underlying items is the account balance.

5 In the examples in this Section, liability discount rates and mortality rates at the end of year one are set equal to their forward rates at inception.

6 We assume that assets are measured under IFRS 9 at Fair Value through P&L. As the fair value of underlying items is also measured at fair value through P&L under IFRS 17 (under both the GMM and VFA models), these components cancel off in the calculation of net P&L, leaving the effect of the variable fee (plus any hedge assets).

8 Note that a (risk-neutral) stochastic model is also required to calculate the Cost of Guarantees in each scenario, at each time-step. In this illustrative example, the contract is simple enough that this valuation can be carried out using Black-Scholes formulae.

How can we help you with IFRS 17?
If you would like a Moody's Analytics IFRS 17 expert to get in touch, please send us your details and we will contact you shortly.