Implementation of the new IFRS 17 accounting standard is a major priority for many insurers globally. Given the short timescales for implementation and amount of effort required, much of this work is naturally focused on the immediate job to be done: producing financial statements and other required disclosures, for reporting periods from January 1, 2021.

However, the introduction of IFRS 17 ultimately requires insurance companies to be able to do more than calculate and report the new financial statements. Insurers and their investors will also want to understand how these financial statements might evolve in the future under different scenarios. Gaining such an understanding is particularly important given the specific characteristics of IFRS 17, and how it differs from other reporting standards. New concepts such as the Contractual Service Margin (CSM) fundamentally change the timing of reported profit and loss.

Furthermore, since IFRS 17 is a principles-based standard, insurance companies have several immediate decisions to make in relation to their particular implementation of the standard. Transition methodology, level of contract grouping, choice of coverage units, and methodology for calculation of the risk adjustment are just a few examples of the decisions that need to be made. These choices don’t just impact the IFRS 17 balance sheet at transition, but also affect the sensitivity of the future balance sheet and the emergence of profit and loss.

A modeling framework for Business Insight

In this paper, we illustrate the use of models to project IFRS 17 financial statements over time and under different scenarios.

One approach to this projection problem is to calculate financial statements in the future in much the same way as they are calculated for reporting today. This approach involves accurately projecting cash flows on individual contracts (or model points) and then aggregating them to calculate IFRS 17 financial metrics at the chosen contract group level. This approach might be considered a ‘bottom up’ approach, in the sense of modeling cash flows at a relatively granular level and then aggregating.

In this paper, we consider implementation of an alternative approach, involving a ‘top down’ modeling framework. This approach takes aggregate (contract group level) cash flows as calculated at ‘time zero’, and adjusts them to reflect the different scenarios under investigation. The main components of the calculation are shown in the following diagram. 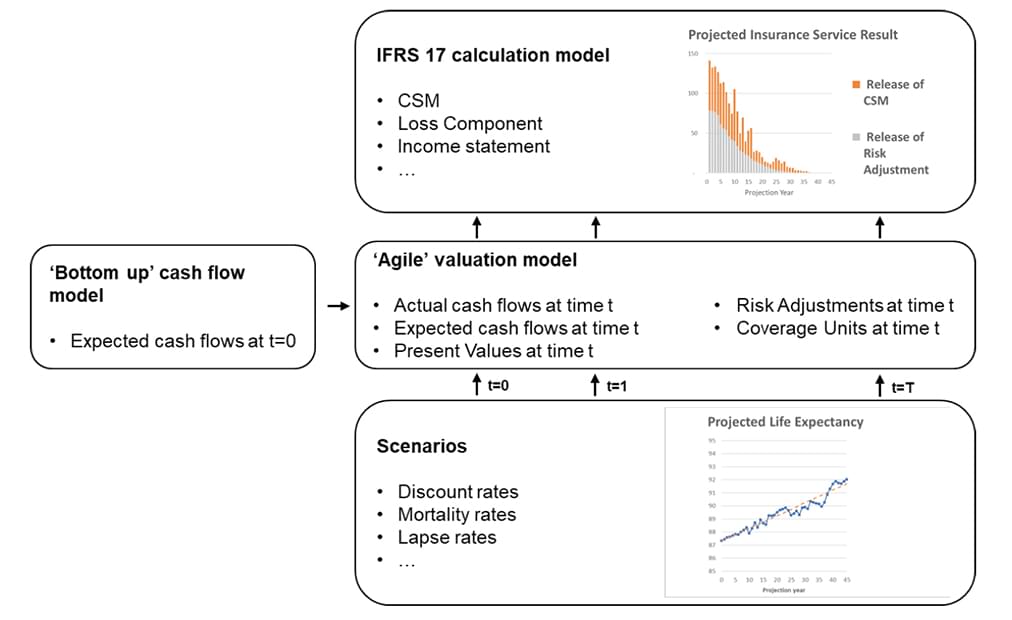 After the cash flows, present values, and risk adjustments are calculated by the agile model, subsequent items required for the IFRS 17 financial statements (such as the CSM, Insurance Service Result, and Insurance Finance Expenses) can be calculated exactly.

Such a modeling framework can be used to analyze the effect of different scenarios on projected IFRS 17 financial statements, in particular volatility of profit and loss. It can also help to investigate the impact methodology decisions (such as choice of risk adjustment methodology, or choice of coverage units).

To illustrate the projection modeling framework, we consider an IFRS 17 contract group consisting of immediate annuities. At inception, the group contains 12 separate model points covering ages 65, 70, 75, 80, 85, and 90 for both males and females. The following chart shows the IFRS 17 balance sheet for this contract group - Present Value of Future Cash Flows, Risk Adjustment, and CSM - starting from inception and projected over the entire run-off of the group. In the single scenario shown here, future discount rates and mortality rates are set equal to their forward rates at inception. This contract group is profitable at inception: the Present Value of Future Cash Flows plus Risk Adjustment is calculated as 15,271 compared to total premiums of 16,000 resulting in an initial CSM of 729. The CSM is released over time in proportion to the chosen coverage units. This gradual release of CSM, along with the release of the Risk Adjustment, results in the following pattern of expected underwriting profits: This pattern of profit emergence reflects a scenario where there are no changes to assumptions (nor discount rates) and actual cash flows are exactly equal to those expected at inception. Under more general scenarios, as actual experience varies from expected and as assumptions change, the resulting balance sheet and profit and loss (both overall level and volatility over time) could deviate significantly.

In these types of projection exercises, it is often interesting to analyze the impact of historical scenarios, or expert forecasts based on narratives, in particular reflecting extreme events (for example, “what if scientists develop a cure for cancer?”)

1,000 scenarios for discount curves and mortality rates were generated over a 50-year horizon. Here we consider a couple of particular scenarios illustrating two different patterns of profit emergence.

The following charts show projected CSM and projected Insurance Service Result (attributed to release of the Risk Adjustment and CSM1). Profits over the first 10 or so years are stable and close to those expected at inception, because mortality assumptions do not change significantly during this period (as indicated by the bottom chart which shows the projected life expectancy of a 65-year old male in this scenario).

Beyond 10 years, profits are still close to those expected at inception but more volatile. This volatility is driven by volatility in the release of the CSM, which in turn is driven by variation in assumed mortality expectations. For example, there is an upward shock to mortality expectations at year 10, with life expectancy of a 65-year old male dropping by around 5 months as a result. This results in an increase in the CSM (absorbing the corresponding decrease in the present value of fulfillment cash flows as attributed to the change in assumptions). The following few years exhibit further volatility in mortality expectations; again this volatility is absorbed via the mechanism of the CSM, resulting in profit and loss being spread out over time. Importantly, the cumulative impact of any longevity increases is never large enough to eliminate the CSM completely, and this contract group remains profitable (in the sense of having a positive CSM) throughout its life. 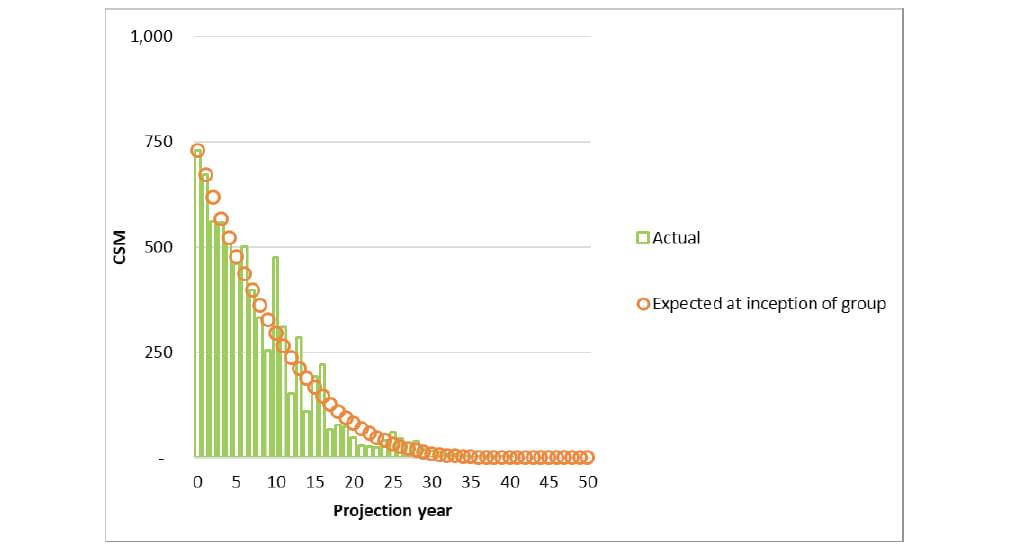 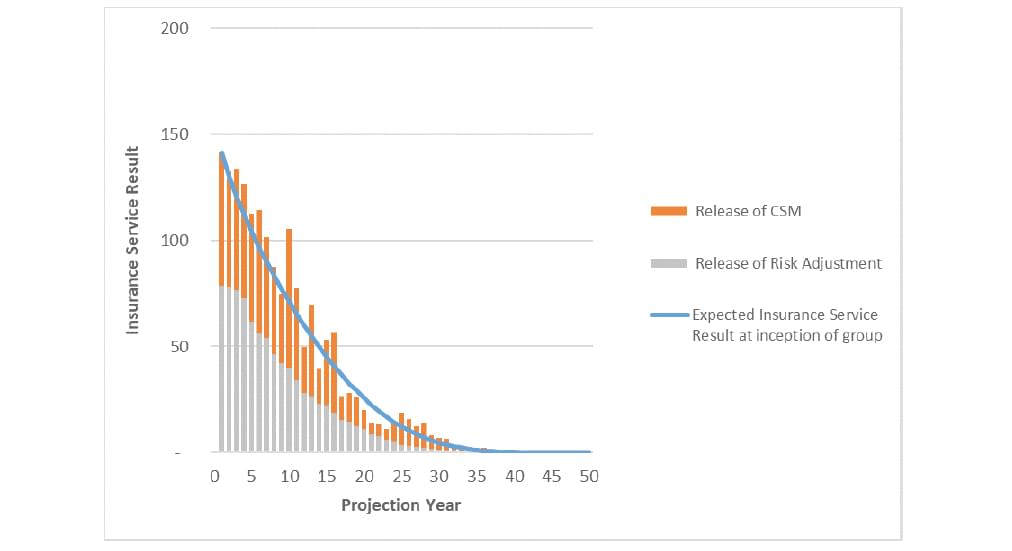 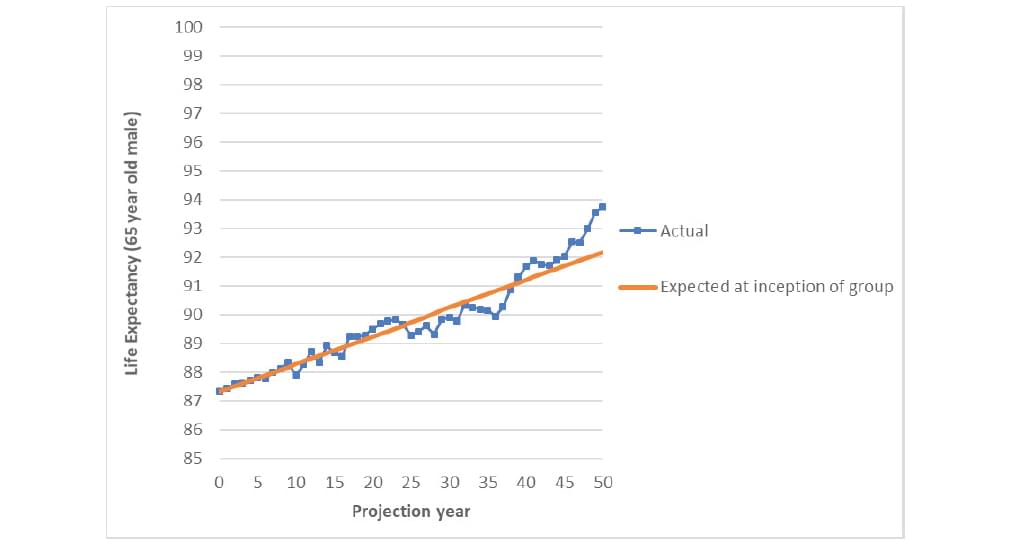 In contrast, now consider a mortality scenario that brings about a highly volatile insurance service result. In this scenario, there are consecutive longevity improvements over the first 3 years of projection. While the CSM can absorb some of the impact of these assumption changes, by year 3 it is wiped out completely, resulting in a relatively large immediate loss at that point, and the establishment of a Loss Component. Subsequent volatility in mortality expectations results in immediate P&L throughout the remaining life of the contact group. Once the Loss Component is established in year 3, it is never fully reversed.

Analysis of these two scenarios illustrates just how different the volatility of profit and loss can be, depending on whether the contract group stays profitable (where the CSM serves to amortize profit and loss) or becomes onerous (where profit and loss are immediately realized). 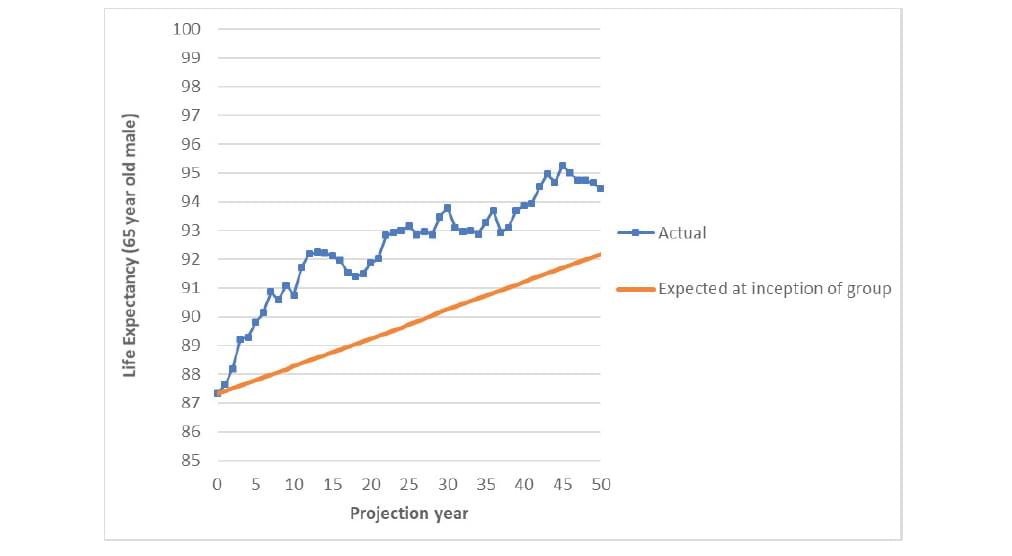 The scenarios presented in the previous section are just two of many scenarios that might arise in the future. However, the agile model is fast enough that a large number of scenarios can be investigated. By generating scenarios using a stochastic model, we can build up a picture of the distribution of items on the financial statements.

For example, the following charts show the estimated distribution of the CSM and Insurance Service Results, at each projection year. Distributions are estimated using 1,000 stochastic scenarios2. 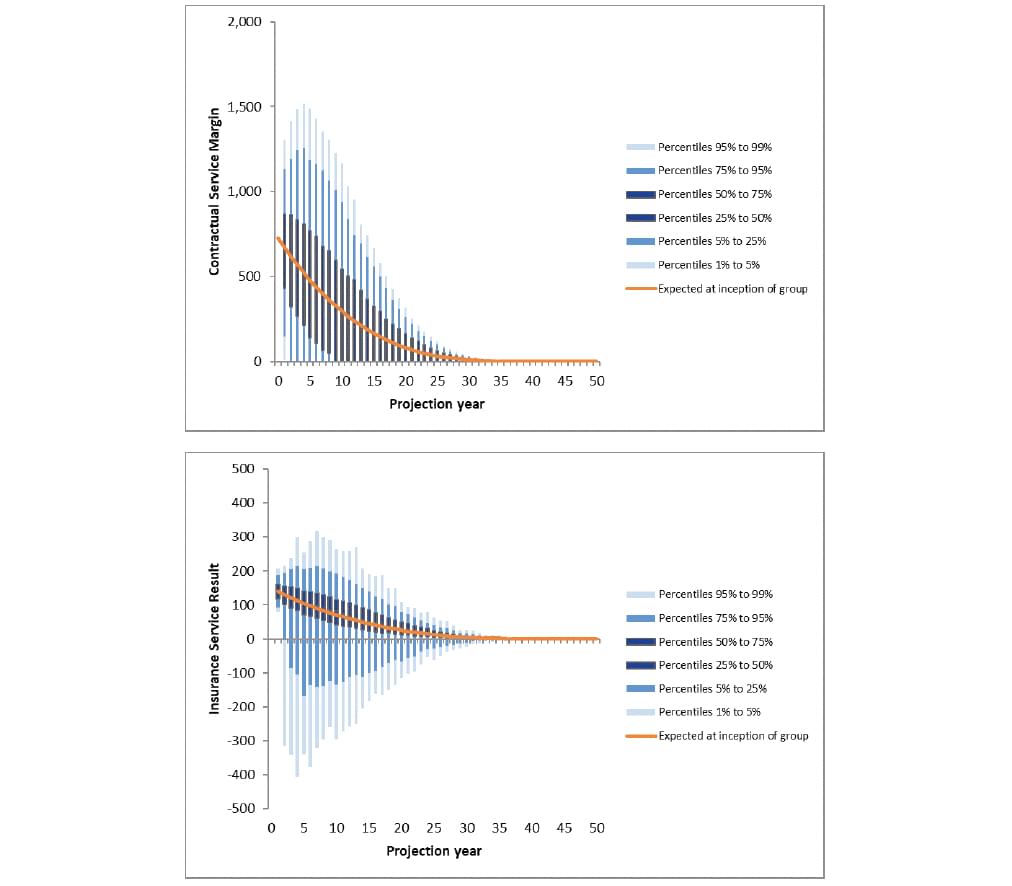 In addition to allowing measurement of such probabilities, the projection model allows the user to measure their sensitivity to assumptions. For example, the following chart compares the cumulative probabilities of becoming onerous for three different methodologies for calculating the Risk Adjustment: the cost-of-capital method and the VaR method using two different confidence levels (85% and 95%)3. As an edge case, we also compare the cumulative probability for the case where no Risk Adjustment is assumed. As the initial CSM is effectively a balancing item, a lower Risk Adjustment brings about a higher CSM with greater scope to absorb future losses.

The Risk Adjustment methodology is just one of the many decisions that companies are required to make in the coming months, and analysis based on projection models can be a useful tool in making such decisions.

Many insurance companies are currently focused on implementing systems to support calculation and reporting of IFRS 17 financial statements. These efforts are understandably focused on being able to perform these calculations for published reporting. This paper highlights the importance of being able to not just measure but also to project financial statements to understand their sensitivity to market risks, insurance risks, and methodology decisions. We have described the use of a modeling methodology to support such analysis, using a case study based on an IFRS 17 group consisting of annuities. Such analysis provides insight into the effect of IFRS 17 on reported profit and loss, and can help in the immediate decision making required to implement this principles-based standard.

1 The difference between actual and expected claims is an additional contribution to the Insurance Service Result, but in this case it is negligible compared to the release of the Risk Adjustment and the CSM.

2 Of course, such probabilistic assessments are sensitive to the assumptions of the stochastic scenario generator (in particular here, the stochastic mortality model).

3 For reference, the ‘equivalent’ VaR confidence level for the cost-of-capital approach here is estimated to be 91%. Mortality shocks used to calculate the Risk adjustment are based on the calibration of the Solvency II Longevity Risk module.

How can we help you with IFRS 17?
If you would like a Moody's Analytics IFRS 17 expert to get in touch, please send us your details and we will contact you shortly.