Funds-transfer-pricing in Banks: what are the main drivers?

Highlights
» Compared with other areas of asset and liability management (ALM), regulation is on the lighter side for funds transfer pricing (FTP), leaving banks a wide gambit of operation.

» In this paper, we investigate the reasons a bank might choose one approach over another, and show why banks might want to align risk-based pricing as a primary driver in their FTP frameworks, with other drivers presented as transparent modifications.

Funds transfer pricing, is not a new concept. It returned to the forefront following the Global Financial Crisis, when it became apparent that the increased funding costs for banks had not been priced into products. A raft of unprofitable business had been written as a result. Figures A1 and A2 illustrate how a spike in long-term wholesale funding costs during the crisis was not priced into new mortgage lending in the UK.

This mis-pricing inspired several regulatory bodies to issue communications on the subject of FTP. However, compared to the proscriptive nature of other post-crisis regulation, instruction on FTP has remained generic and high level. The United Kingdom Prudential Regulation Authority (PRA), for example, which regulates UK Banks, has only one line in their regulatory handbook referring to FTP1, although it is included as a key aspect of their supervisory reviews. The United States Federal Reserve (The Fed) has issued a paper on FTP, as has the Committee of European Banking Supervisors, with both positioned as guidance rather than requirements.2 On a global level, the only relevant paper is a Bank for International Settlements (BIS) Occasional Paper written in 20113.

Banks, therefore, have been left with a wide remit when designing their FTP frameworks. Below we explore three broad categories of methodology and the reasons Banks might choose one, or alternatively, continue to ignore FTP frameworks altogether.

WHICH BANKS CHOOSE THIS APPROACH?
During the global financial crisis, many banks, particularly those banks heavily funded by wholesale markets, suffered from a jump in funding costs. Figure 2 illustrates the jump in funding costs. Pre-2007 the differential between what many banks paid for long-term funding and the ‘risk free’ rate was negligible. Post crisis, it became impossible to ignore; and that is the way it has stayed. Correctly pricing a term liquidity premium (TLP) into products alongside pricing interest rate risk, has become a focus for many banks. 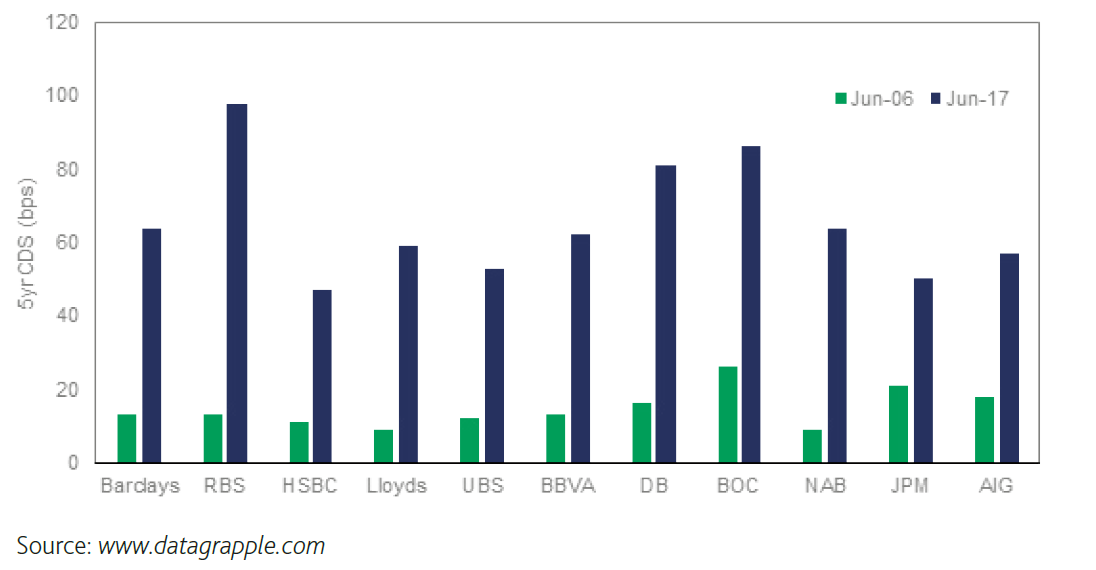 Interest rate risk and term liquidity are not the only risk types where an FTP framework can be used to price risk into products. Figure 3 shows the results of a Moody’s Analytics survey of 160 industry professionals, which indicates the range of risk elements considered for integration into FTP. 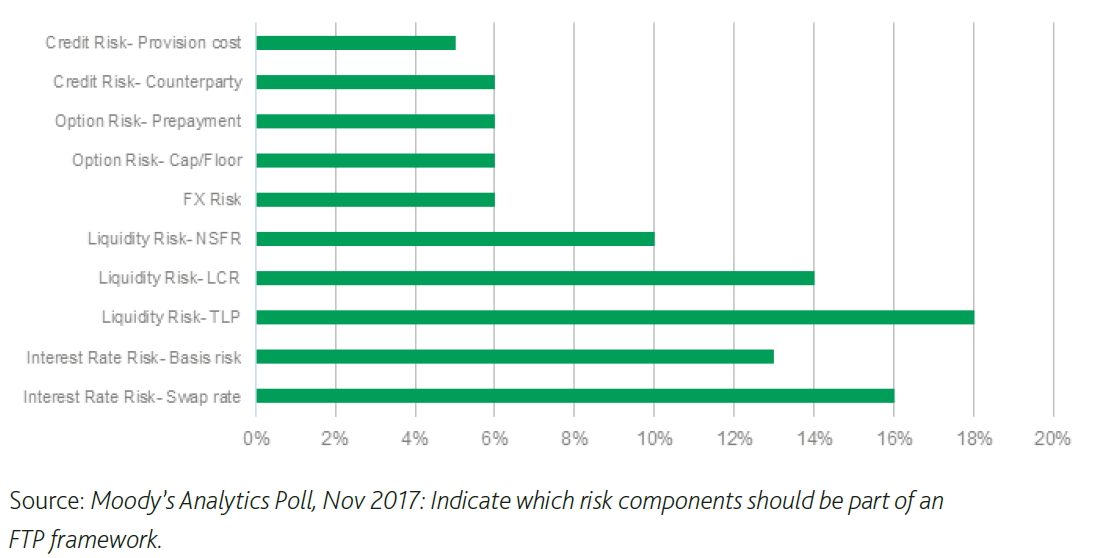 As outlined in Figure 3 above, TLP is seen as one of the most important risks to price. However, there are banks where the TLP concept is not seen as significant and these banks tend to fall into two categories. First category – banks operating in jurisdictions where market interest rates, retail deposits, or both, and lending rates are subject to heavy government intervention. Banks in such jurisdictions often see no benefit in an FTP mechanism to transfer costs, as rates are stipulated and change infrequently. The second category is banks where funding originates primarily from non-wholesale sources. These banks might still see value in an FTP system to transfer other risks into product pricing however, such as basis, optionality, or FX risk.

THE CONCEPT
Even when the risk components selected are identical, the range of methodologies banks use can be wide.

Starting with interest rate risk, methodologies often consist of trying to isolate the ‘risk-free rate’. In liquid markets the ‘risk-free rate’ is often equated to the swap rate, although it can be more of a challenge in illiquid or closed currency jurisdictions. The point on the curve chosen to charge assets and pay liabilities, depends on whether, or how, behavioral analysis is performed at a portfolio or product level. Sometimes the same reference rate is used for all transactions and a ‘basis risk’ split assesses the delta between the reference and risk-free rate.

As observed in the preceding section, interest rate risk, and liquidity risk in the form of TLP is often regarded as an important part of an FTP framework. Term Liquidity Premium is assessed by attempting to isolate the spread of the firm's true 'cost of funds' versus the risk-free rate. Methodologies range from using wholesale issuance curves, to referencing a basket of competitor credit default swaps. Sometimes it is possible to adjust the curve by reference to costs of other funding sources for the bank, for example retail funding, or capital. It is also the practice in some banks to apply different costs of funds to different business units.

Inclusion of other risk components varies substantially from bank to bank and depends on product characteristics, or the need to centralize a particular risk away from business unit management. With option risk the cost of, say, a cap/floor or prepayment option can be priced and converted into a spread. If the bank has products with coupons that are linked to inflation, inflation swaps can be used to price inflation risk; although this approach is only possible where there is a liquid market for inflation swaps. As a further example, if a transaction is issued in one currency but funded in another, an FX swap can be added to the reference curve. Some banks also attempt to isolate a credit risk component, although this is more commonly regarded as the residual part of the client rate, that is the responsibility of business units and so outside the FTP charging process.

The reason for using FTP to incorporate a risk price into product prices is to remain competitive and ensure that products are not incorrectly under-priced or over-priced. However, as discussed in the above section, even where it is accepted that risk-based pricing is the ‘best practice’ basis for an FTP framework, methodologies can vary extensively between institutions.

The most prevalent example of this phenemena is including the ‘costs’ of meeting the Liquidity Coverage Ratio (LCR) into product pricing. The LCR forces banks to hold a portfolio of high-quality liquid assets (HQLA) which yield a comparatively poor return. This requirement, along with its status as a binding constraint for many banks, has led to the LCR being a commonly referenced regulatory cost in FTP frameworks.

Figure 4 illustrates the range of regulatory constraints to which banks are subject, and highlights the constraints which are the most binding. As can be seen, LCR was named as the most binding factor in the banks surveyed, over and above any internal liquidity ratio or any internal or external capital ratio. No wonder then, that banks have started using all the tools at their disposal, including FTP, to steer the institution; regulatory constraints have become a real business cost.

THE CONCEPT
Methodologies to pass on LCR cost usually consist of assessing the ‘cost of carry’ of the liquidity buffer. This cost is then split out using LCR impact as an allocation key, by weighting how costs are distributed between balance sheet items. Some firms allocate costs to the liability side only where an LCR ‘outflow’ is generated. Other firms allocate to both liabilities and assets, incentivizing assets which generate an LCR ‘inflow’ and thus theoretically reducing the size of the necessary liquid asset portfolio holdings.

More recently, some banks are looking at incorporating net stable funding ratio (NSFR) costs into their FTP frameworks as well. The NSFR requires long term/ stable funding to be held against a portion of the asset book and can contribute to a higher overall funding cost. This approach is less common than incentivizing LCR, both because it is a binding constraint for fewer banks, and because some banks address NSFR compliance via alternative methods like governance regarding product match funding.

It should be noted that, once again, incorporating such regulatory cost into product pricing is not relevant to all banks. In Asia, for example, an abundance of retail funding ensures that ratios such as the LCR and NSFR are way over regulatory minimums, making regulatory cost transfer irrelevant. For banks in the Middle East, Sharia-compliant HQLA can be costly4 and so transfer pricing this cost is of particular importance.

Using FTP to subsidize particular product sets over others

WHICH BANKS CHOOSE THIS APPROACH?
Proponents of ‘pure’ FTP would argue that adding overlays of incentives and subsidies undermines the goal of FTP, which is transparent risk-based pricing. This view is held by several regulators, who subject such practices to specific scrutiny. However, every bank operates in this manner to some extent, and it is therefore worth exploring best practice methods of operation.

THE CONCEPT
FTP frameworks are always controversial, as they alter business unit revenue. It could be argued that applying risk-based FTP is too blunt a tool. For example, business managers might argue that particular growth portfolios require short-term subsidies to establish a market, or that particular product sets enable cross-selling of other products. Often the argument resides in a need for competitiveness with peers.

Whatever the reason behind an alteration to a risk-based FTP price, best practices dictate it be done with transparency. Many banks continue to calculate what the risk-based FTP price would be, and then show any incentive separately. This approach makes it obvious to management that the product is being subsidized, and that if it were not subsidized, the profit margin on the product would be negative. Banks can further require any subsidies/alterations to be reapproved regularly through a relevant governance committee, which can assess whether the justification remains valid

Providing transparency where a mixture of both risk-based and incentive-based drivers are used in FTP pricing can be a challenge. Complexity increases when you overlay many different products on a diverse balance sheet. In these cases, FTP frameworks cannot be operated without sophisticated software which can split the risks and incentives into separate components on a granular level.

Conclusion
Funds transfer pricing is a tool at banks’ disposal to guide the shape of the balance sheet. Regulation in this subject area is comparatively light, leading to a fair amount of divergence in banks’ methodologies and approaches.

In banks where FTP frameworks are in place, pure risk-based pricing has often been augmented or overridden via inclusion of regulatory costs and business incentives or subsidies. Other banks see FTP frameworks as less relevant due to operating in jurisdictions with heavily controlled market rates and less restrictive regulatory ratios in areas which impact funding.

In our view, it is important that banks which maintain FTP frameworks recognize the need for strong governance, to ensure that they achieve the goals originally intended when frameworks were put into place. A comprehensive tool able to deal with granular data and able to segregate risk components is also essential for transparency and achieving a controlled implementation of FTP policies.