NEW YORK, October 18, 2017 – A new study by Moody’s Analytics, a leading provider of economic research, finds that many of the nation’s states are not prepared for the next recession. Today, the typical state has 8% of their budget in reserves that could be used to fund government services in an economic downturn. However, “Stress-Testing States” reveals that they need at least 10% in reserves to weather the next recession without having to resort to serious cuts to spending or tax increases. States would need to double their reserves to more than 16% to withstand a downturn comparable to the 2007-09 Great Recession.

“An inescapable economic reality is that there will be another a recession, regardless of how high-flying the economy may appear,” said Dan White, head of fiscal policy research at Moody’s Analytics, “as such, it is only prudent for states to prepare themselves for that recession.”

The study examines the preparedness of states’ finances to endure economic downturns. Economists at Moody’s Analytics ran a stress test of all 50 states to arrive at an estimate of each state’s recessionary needs if a moderate or severe recession were to occur. The study takes into account the impact of the business cycle on state revenues and spending over two fiscal years.

The results of the stress test show that a majority of states are relatively prepared for a recession similar in severity to the typical recession in recent decades: 16 states have the reserves they need, while 19 states have most of the funds. 15 states currently have significantly fewer funds than they need for the next recession. Meanwhile, only nine states have the funds they need to withstand a more severe economic slump similar to the Great Recession. 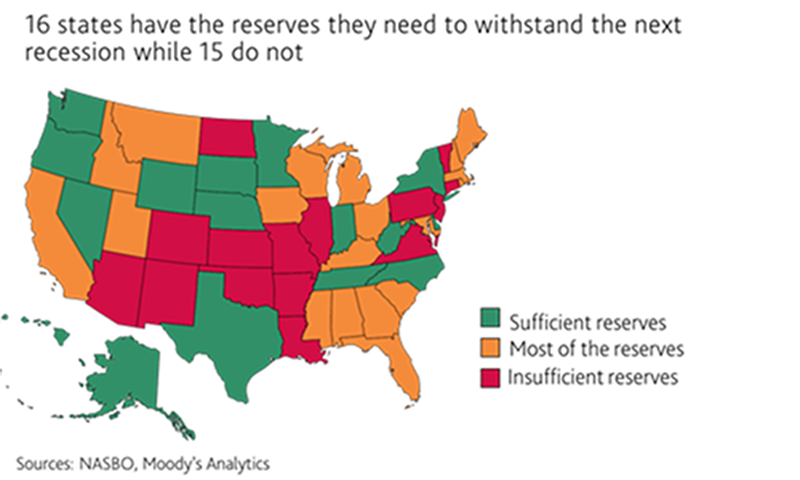 “A lesson of the Great Recession is that states must formulate targeted reserve levels with intentionally crafted policy goals in mind,” said White. “Planning for the next recession involves the difficult balancing act of putting away enough money today to prepare for a future downturn, without stunting the current economic expansion.”

About Moody’s Analytics
Moody’s Analytics helps capital markets and risk management professionals worldwide respond to an evolving marketplace with confidence. The company offers unique tools and best practices for measuring and managing risk through expertise and experience in credit analysis, economic research, and financial risk management. By providing leading-edge software, advisory services, and research, including the proprietary analysis of Moody’s Investors Service, Moody’s Analytics integrates and customizes its offerings to address specific business challenges. Moody's Analytics is a subsidiary of Moody's Corporation (NYSE: MCO), which reported revenue of $3.6 billion in 2016, employs approximately 11,500 people worldwide and maintains a presence in 41countries. Further information is available at moodysanalytics.com.